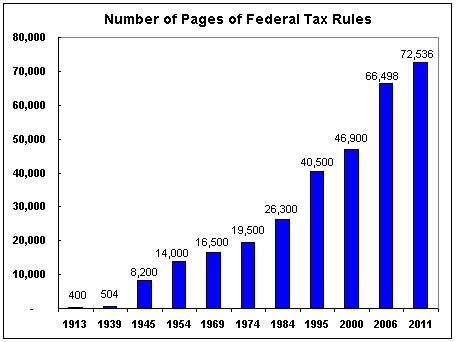 The Government of the United States of America is not in the business of generating its own wealth to run day to day operations.  Without our hard earned federal tax dollars going into the Treasury, our government would not be able to function.

The US Tax Code has become such a complex and convoluted mess of social engineering the IRS is having problems doing its most basic function – collecting taxes.

Our legislators have learned they can control people and corporations behavior by way of the tax code.  The Corporations have learned they can lobby legislators to make favorable changes in the tax code for their personal benefit. Legislators can be bought off  for pennies on the dollar to make favorable tax code changes no one will ever report on.  After all – taxes and accounting theory do not sell newspapers or burn up the blogosphere.

On the people side of the equation, our legislators can control large voting blocks of people by giving tax credits, exemptions, and in some cases unearned tax refunds assuring a large segment of the voting public will vote for one party or the other.

Our Legislators get rich by forcing Corporations to make all the right political donations in order to get the tax code provisions needed to stay competitive.

Our Legislators use the tax code to pay off segments the population to vote for or against a (D) or and (R) helping ensure a long and profitable career for our elected officials.

Listen to anyone who is serious about overhauling our current tax code.  These individuals understand our US Tax Code is the oil that keeps the engine of America running smoothly.

Any legislator who fights the overhaul of the US Tax Code has become corrupted by the system and lost sight of what our Founding Fathers intended when they wrote the Constitution and Bill of Rights for, we the people.

“With a week to go before tax season opens, taxpayers were already bracing for a potentially “miserable” filing season. It turns out that it could live up to the hype.

What does that mean for taxpayers?

Quite frankly, none of this information is earth-shattering. I think many of us – tax professionals and taxpayers alike – have been hoping for the best but bracing for the worst this tax season. It looks like we’re getting the latter.

Tax season is still slated to open on January 20, 2015 (those pesky rumors suggesting the date has been pushed out further are just that: rumors). For the latest word on the 2015 tax season, keep checking back.”