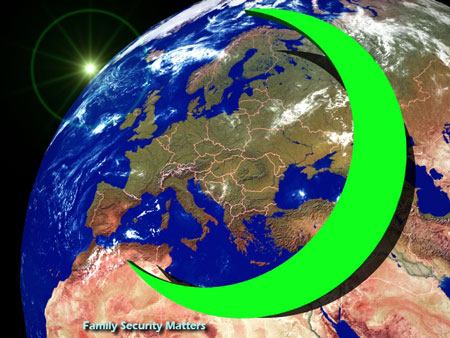 When the Islamic State says they will populate Immigrant boats leaving Libya and Tunisia for Rome what does the Italian government do, they decriminalize illegal immigration.

On January 21, 2014 the Italian Senate decriminalized illegal immigration by a vote of 182 votes in favor, 16 against, and 7 abstentions opening the flood gates for unaccountable, unskilled, African, and Middle Eastern refugees and ISIS terrorists.

The UN reports, “In the first seven months of 2014, more than 87,000 people arrived in Italy by sea, mainly from Eritrea and the Syrian Arab Republic (Syria). In an effort to reduce the risks linked to such journeys, in October 2013 the Italian Government launched the Mare Nostrum operation, which has rescued more than 100,000 people.”

Now in 2015 Muslim Jihadi’s see a green light for Islamic expansionism into the European Union and the Holy See.

The Islamic State is building a Sunni Muslim Caliphate in Iraq, Syria, Somalia, and branching out into Libya and Tunisia.

Shia Muslims are building a Caliphate in Azerbaijan, Iran, Southern Iraq, Bahrain Qatar, Lebanon, and Yemen.  One thing the Sunni and Shia Muslims both agree on is they are in a constant state of Jihad against the non-Muslim world when they are not killing each other.

The Italian government must deny entry to every boat  packed with immigrants and send them right back to Libya and Tunisia where their journey’s began.  Once a few of these immigrant boats are sent back to its point of origin, the flow of immigrants and Jihadi’s will slow down to a manageable level.

Understanding the Islamic concept of Hijra

The Islamic calendar did not start when Mohammad was born or had his first revelation.   Islam officially started when Mohammad left Mecca for Medina, in the great Hijra or migration.  Most all Muslims believe the Hijra is the seminal starting moment for the spread of political, military, and religious Islam.

Mohammad expanded his empire by the sword through kinetic warfare and terrorism.  Mohammad would send his most knowledgable Muslims to foreign lands spreading the word of Islam.  When Islam took a foothold in the target city he would instruct his followers to give the ruler an ultimatum of accepting Islam, pay the Jizya (submission tax), or face the wrath of Mohammad’s armies.

Muslims believe Mohammad is the perfect example for all mankind. Mohammad’s Islamic expansion lives today in the growth of the Caliphate – Sunni or Shia it does not matter.

It is totally consistent with Islamic doctrine and the examples of Mohammad for ISIS or The Islamic State to send its fighters to Italy with the goal of taking Rome from the Pope and making the Vatican into a Mosque.

So all my Italian and European friends, when Abu Bakr al-Bagdhadi,the leader of ISIS or the Islamic State, al-Qaida, Daesh, or ISIL (they’re all the same) tells you he will flood immigrant boats to Italy with Jihadi’s to capture Rome, it is not an idle threat.  It is just a Muslim war lord following the example of his precious Mohammad.

Wake Up Italy And Take Care Of Business

On April 24, 2015 the BBC reports, “Suspected extremists(Muslim Jihadi’s) being investigated in Italy over links to al-Qaeda may have been planning an attack on the Vatican in 2010, prosecutors say.

A militant ring was found to be operating in Sardinia, and there had been possible plans to target the Holy See, according to investigators.

Police issued 20 warrants and made nine arrests in raids on Friday.

Prosecutor Mauro Mura told a press conference in Cagliari, Sardinia, that wiretaps indicated the suspected terrorists had been planning a bomb attack at the Vatican in March 2010.

There had been “signals of some preparation for a possible attack”, including the arrival of a suicide bomber in Rome, the Associated Press quoted Mr Mura as saying.”

Sorry to tell you this Italy but you have been called out just as Mohammad called out the ‘others’ 1400 years ago.

If the west fails to acknowledge the tactics of war used by their Islamic adversaries, the bloody consequences will be on the hands of the Italian Senate and the Pope.