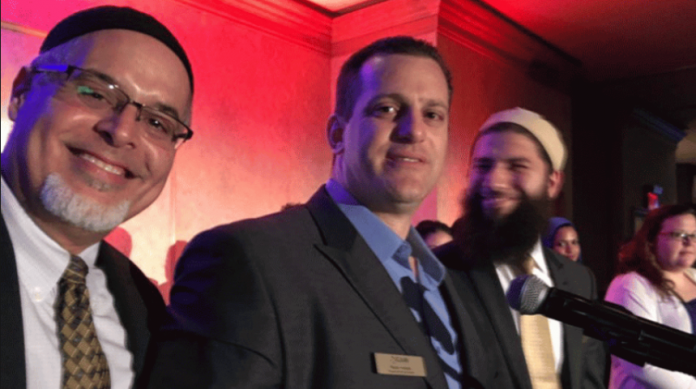 The community responded enthusiastically filling Rabbi Silver’s Synagogue to standing room only.   The three Muslim leaders were last minute no shows in a, shameful and dishonorable, effort to derail the event.

Rabbi Silver is too much of a gentleman to publicly expose his Islamist friends shameful behavior, but I drove two hours to attend this event and don’t take such rude behavior lightly.

According to Islamic doctrine, Mr. Ruiz, Deputy Hamze, and Dr. Al-Halabi violated Qur’an verse Al-Ankabut 26: 46-47 where it is commanded Muhammad and the Muslims behave kindly towards People of the Book (Christians and Jews) and that the commonalities between them be emphasized.  Prophet Muhammad never refused those who wanted to meet, speak, or debate him fulfilling his most important mission to convey the book of Allah inviting the non-believers to allah.  Not following the example of Muhammad is serious business for most Muslims, except when the non-believers are involved.

Less than two months ago at a Florida Atlantic University Islamophobia panel discussion, Bassem Al-Halabi earned the nickname Professor Chop Chop.  Professor Chop Chop Al-Halabi  said, ” But if it takes one or two people to have their hands cut off, and then there’s no more stealing and there’s no more stealing in the whole nation – that’s a much better resolution than having hundreds of people die every day.”

Professor Al-Halabi truthfully explained the Islamic law punishment for stealing is the cutting off of hands and feet.  Al-Halabi explained how these Islamic public body mutilations are necessary for the government to control the people in Islamic cultures.

Professor Chop Chop unknowingly made the case why our Representative Republic form of government and Islamic Law are incompatible.

Bassem Al-Halabi – 4 Facts Everybody Should Know

Fact: June 2003, Al-Halabi was found guilty of illegally shipping a $13,000 thermal imaging device to Syria in 1998, in a violation of United States technology export laws.

Fact: Dr. Al-Halabi worked closely with and still supports convicted terrorist Sami al-Arian.  To this day Al-Halabi will not condemn Hamas a US designated terrorist group.

Fact: Professor Al-Halabi is one of the founding members and current leader at the Islamic Center of Boca Raton (ICBR).  From it’s inception, nothing happens at ICBR without Dr. A-lHalabi’s knowledge.

Fact: Under Dr. Al-Halabi’s leadership at ICBR, they accepted a $600,000 grant from the Global Relief Foundation (GRF).  The Department of Treasury in a press release states GRF has connections to and provided assistance to the Al-Qaeda terrorist network.

WARNING: These Two Al-Halabi ‘Scrubbed’ Website Quotes Will Shock You

The United West research team uncovered a dark and hate filled window into the soul of one Dr. Al-Halabi.   Al-Halabi thought his ICBR Mosque’s webpage postings from 1999-2002 were scrubbed from the internet never to see the light of day.  You won’t believe what you read next.

On March 5, 2001 under the ICBR website articles tab, a question was asked, Why can’t Jews and Muslims live together in peace? Answer: “Jews are people of treachery and betrayal; it is not possible to trust them at all…As the Muslims and Jews are enemies residing in opposing religious and doctrinal camps, it is not possible for them to be brought together unless one is made to submit to the other by force…and prevented them (Muslims) from earning a proper living, and carried out chemical and radiational experiments on their prisoners, and taken organs from them (Muslims) for transplant into Jewish patients… and all other kinds of persecutions and atrocities.”

The quotes below are from an April 6, 2001 ICBR website link on their homepage to a Jihad in Chechnya website.

Islamic Ruling on the Permissibility of Martyrdom Operations

“Another technique is for an armed Mujahid (Jihadi) to break into the enemy barracks, or area of conglomeration, and fire at them at close-range, without having prepared any plan of escape, nor having considered escape a possibility. The objective is to kill as many of the enemy as possible, and he will almost certainly die…As for the effects of these operations on the enemy, we have found, through the course of our experience that there is no other technique which strikes as much terror into their hearts, and which shatters their spirit as much…They have also become occupied with trying to expose such operations before they occur, which has distracted them from other things. Praise is to Allah.”

The tactics exposed above by Dr. Al-Halabi’s approved website link, are what we saw take place in the Orlando Pulse Nightclub shooting, San Bernardino attack, German mall shooting, Nice attack, Charlie Hebdo, Garland, Tx, and the  84 year old UK Catholic priest beheaded inside his Church during  mass, to name only a few.

The words and deeds of Bassem ‘chop chop’ Al Halabi fit a disturbing pattern of behavior, supporting the Global Jihad Movement, that should make any DHS and FBI profiler concerned.  The next logical question is, how much of this Jihadi ideology was taught to ICBR Mosque members, their children, and people unknown to the present day?

At the Florida Atlantic University Conference on Islamophobia, Rabbi Barry Silver asked Bassem Al Halabi to find another panelist for his sequel Islamophobia event at his Synagogue on July 20, 2016.

Open source information on Bassem Al-Halabi’s ties to Islamic terrorism is troubling to even the most casual observer.  The Broward County Sheriff’s Department and DHS, should be looking closely at the Al-Halabi Nezar Hamze connection with  professional interest.

Jordan Shachtel writes in a 12/15/2015 article, “FBI Chart and Documents Portray CAIR As Hamas-Related Organization writes, “In 2007, CAIR was named as an unindicted co-conspirator in the Holy Land Foundation (HLF) trial, a Hamas financing case that would result in the FBI ceasing its working relationship with CAIR. The HLF trial was the largest terror-financing case in American history. In 2008, during a retrial of the HLF case, an FBI Special Agent labeled CAIR as “a front group for Hamas” during her trial testimony. In 2010, a federal judge reiterated that his court had “ample evidence” that CAIR was involved in “a conspiracy to support Hamas.” CAIR, which relies upon millions of dollars in Saudi cash, was recently listed by the United Arab Emirates (UAE) as a terrorist organization.”

Dr. Bassem Al-Halabi and Deputy Sheriff  Nezar Hamze would appear to be terrorists based on the organizations they are affiliated with.

Wilfredo Ruiz was a Navy JAG Officer from 1993-1997,  later transitioning into the Navy Chaplain Officer’s Program.  Sometime in 2003 Mr. Ruiz ‘reverted’ to Islam.  Islamic doctrine teaches that every person is born Muslim and reverts back to their Allah given natural state, a Muslim.  Mr. Ruiz embraced his Islam by becoming active in both  Hamas supporting groups AMANA and CAIR.

Joe Kaufman writes, “In one article previously found on Ruiz’s AMANA website, it is stated, “Every believer [Muslim] should firmly believe that the Jews and Christians are kuffaar [infidels] and enemies of Allaah, His deen, the Prophet Muhammad, and the Believers… The efforts to gain the friendship of the Jews and Christians are useless, as they will never be pleased with the Muslims until the Muslims follow their religion.”

All three of these men, Ruiz, Al-Halabi, and Hamze made a promise to participate in Rabbi Silver’s panel discussion, representing the Islamic perspective.

Deputy Sheriff & CAIR Leader Nezar Hamze called Rabbi Silver a  day before the panel discussion and canceled with a snarky comment that “duty calls.”  Bassem Al-Halabi cancelled the day before without even a good explanation except he will try to make it.  CAIR Leader Ruiz at least gave Rabbi Silver a week’s notice saying he would be out of town.

Lying An Offense To Allah – Not In All Cases

Ruiz, Hamze, and Al-Halabi are hypocrites according to Muhammad.  “The Holy Prophet (s.a.w.a) is reported to have said: “Three traits make man a hypocrite even if he prays and fasts: Betrayal of trust, lying and non-fulfillment of promise.” [al-Kafi]”

Hazrat Imam Ali (a.s.) also remarked, ‘Do not make a promise that you are not confident of fulfilling.’ [Ghurar al-Hikam, no. 10297]

Islamic traditions comment further, “Non-adherence to one’s promise shall cause one to become hated, its burden shall remain upon his neck like a necklace till the Day of Judgment and Allah shall cause the person’s enemies to gain ascendancy over him.”

Here is where the duality of Islam comes into play.  Taqiyya or lying to further the cause of Islam is an acceptable practice in Islamic doctrine and theology.

Conclusion – Ruiz, Al-Halabi, Hamze Afraid Of Their Past In Public

The information presented above is so powerful, that if made public in a forum type setting,  it may have been a factor in Ruiz, Hamze, and Al-Halabi  not appearing at  a public discussion they had help plan two months earlier with Rabbi Silver.

I don’t believe,  Ruiz, Hamze, and Al-Halabi are ashamed about being cultural terrorists and terrorist sympathizers.  They are only ashamed when that information is made public.

More information from Al Halabi’s scrubbed ICBR web pages will be coming out in the months ahead.

The two ICBR web page samples I presented in this article are not compatible with our Constitution and Rule of Law.  Worse – is that Al-Halabi’s scrubbed web pages are an incitement to violence and promotes a dark hatred of Jews and Christians.  Ruiz, Al-Halabi, and Hamze are wolves in sheep’s clothing.  They are not a part of the solution but a part of the problem.

The facts have been presented to you.  Verify the information for accuracy, as you should all information.  Knowing the truth can be a burden as you look and analyze the world around you.  I hope you handle your burden well.