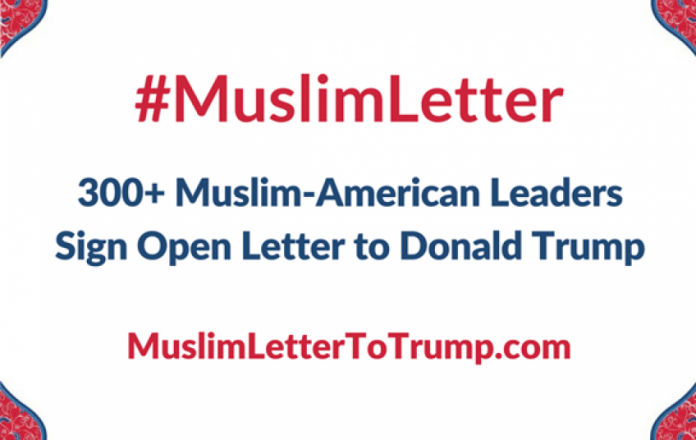 371 American Muslim leaders signed a joint letter attacking President Elect Donald Trump with lies and poorly executed intimidation tactics.  The 371  signers of this letter are overplaying the victim card and offending the sensibilities and innate goodness of the American people including many followers of Islam.

My first recommendation for the 1 million American followers of Islam who did not sign this political  train wreck of a letter,  you need to take a long look at your leadership who did, and question their behavior, done in your name.  These so called Muslim leaders are opening the gates of “hellfire because they could not control their tongues” and taking you with them. (Al-Bukhari and Muslim Book 18, Hadith 1514)

For the 1 Million followers of Islam who reject the false narratives  and deceptive statistics of your leadership who signed this letter, here is your recipe for success.

1.   Join the American Islamic Forum For Democracy (AIFD) and the Muslim Reform Movement.  Publicly demand these two groups become the dominant voice of the American Followers of Islam.

2.   Send a joint letter to President Elect Donald Trump congratulating him on his victory and the Muslim community will work with the Trump administration too defeat the Global Jihad Movement.

4.  Let President Elect Trump know American Muslims are grateful that in American every sect of Islam is free to practice their religious rituals without fear from fellow Muslims or an oppressive state. Publicly acknowledge, the American version of freedom of religion does not exist in any country that is ruled by Islamic Law aka Shariah Islamiyya and you support our United States man made laws.

5.   We as American Muslims believe in the concept of,  E Pluribus Unum (Out of Many  One) not the supremacy of the Ummah supreme over all others.

American followers of Islam, I tell you this because it will take tens of thousands of brave Muslim souls to reform Islam, only you can do it, it is not the responsibility of the ‘others’.

Islamic Blasphemy Laws Must Be Rejected

Mohammad was a smart sociopathic leader declaring that anyone who defames, alters, or innovates Islamic doctrine are blasphemers.  The punishment for blasphemy in Islamic Law is death, torture, or banishment.  These laws apply to Muslim and non-Muslim alike.  If a follower of Islam thinks about  critically questioning Islamic doctrine and theology, they will likely keep quiet, out of fear,  just as Mohammad intended.  There are many followers of Islam who chose to publicly critically analyze Islamic doctrine and theology and paid a heavy price.  Ironically,  Muslim advocacy groups will attack me for writing about this topic.

Dr. Zuhdi Jasser, founder of American Islamic Forum For Democracy (AIFD), is one of those brave American followers of Islam who is working to reform the Islamic movement.  Dr. Jasser advocates separating the religious rituals of Islam from it’s nation building supremacist politics.  Groups like the Council on American Islamic Relations (CAIR), who are signatories on the Trump Letter, defame and slander Dr. Jasser at every opportunity.  Dr. Jasser and his family have been kicked out of four Mosques and received death threats from other followers of Islam who believe he is a blasphemer causing fitna.

Dr. Jasser and his family live in Arizona, not some far off Middle Eastern country.  The Jasser  family has received numerous death threats from their fellow Muslims which is shameful.

The signers of the ‘Muslim Letter To Trump‘ attack Trump’s advisors who critically analyze Islamic doctrine and theology.  Many of these same  Muslim advocacy groups, Mosque leaders, and their supporters are trying to silence  Trump’s advisor picks,  just as Islamic blasphemy laws have been used to silence critics for the last  1400 years.

These types of terrorist attacks are meant to instill fear into the hearts of the non-believers but in the long run, these tactics ultimately fail.

There is a battle going on in America now to control how Islamic doctrine is analyzed by law enforcement, military, academics, mainstream media, and non-Muslim clergy.

The fact we now have a President-elect who is unafraid to analyze the  Global Jihad Movements threat doctrines,  has these American Muslim leaders who signed this letter concerned.   Groups like MPAC, ISNA, MSA, CAIR, MSA, NAIT, etc… are concerned because they may be losing influence making domestic and foreign policy.

The American citizenry are having a honest discussion on Islamism like they would Socialism, Communism, Marxism, or totalitarian dictatorships.  These national discussions on Political Islam and the Global Jihad Movement have nothing to do with the individual followers of Islam.  They  have everything to do with analyzing a political doctrine and the Shariah Islamiyya (Islamic Law) which is in conflict  with our Constitution, Bill of Rights, and our man made laws.

Poison pen letters like this Open Letter: From American Muslim Leaders to President-Elect Trump are not helpful.  The tone, tenor, and content of this letter further divides us as a nation.  “Out Of Many One” is a positive theme All Americans should embrace.  Our country works because majority rules and our Constitution protects minority rights, especially these 371 misunderstanders of how and why a Representative Republic works.  One Team One Fight.

As American Muslims committed to the values of our faith and the principles that underpin our country’s democracy, we write to express serious concerns about policies proposed during your campaign as well as announcements regarding appointments to your upcoming administration.

Muslims have been an integral part of the United States since its founding when the first slave ships arrived on its shores.  Today, millions of American Muslims are among the country’s most diverse faith groups, representing seventy-seven countries, with African-Americans, South Asians and Arab Americans making up three quarters of our community. Muslims have served and paid the ultimate sacrifice in every war since the American Revolution with more than 3,939 Muslims serving honorably in the U.S. Armed Forces, today and many more in law enforcement.

The values we hold align with those of the overwhelming majority of Americans. According to a recent study by the Institute for Social Policy and Understanding (ISPU), Muslims are as likely as Protestants to have a strong American identity.  American Muslims who view their faith as important are more likely to say being American is central to their identity. And, those who regularly attend mosques are more likely to be civically engaged.

Like other Americans, we love our country and are committed to preserving religious freedom, equal opportunity and equal protection under the law for all.   As our President-Elect, one of your duties is to ensure our collective safety and security. This includes protecting the First Amendment rights of all Americans to freely practice their faith, without fear, intimidation or reprisal.  This is a particularly critical duty now as the FBI recently reported a 67 percent increase in anti-Muslim hate crimes in 2015.

During and immediately following this year’s presidential election cycle, American Muslim organizations received more reports of anti-Muslim hate crimes than any other period of time since 9/11. Your recent denunciation of such behavior on 60 Minutes was a positive first step, and we urge you to clearly and strongly condemn bigotry, hate crimes and bias-based school bullying directed at any American, including American Muslims. We call on you to make mutual respect and acceptance a hallmark of your presidency.

Furthermore, along with many other Americans, we are deeply troubled by reports that your team is actively considering proposals that would target Muslims based on religion and violate their Constitutional rights. Advisors and members of your transition team have proposed a registry of Muslim immigrants and visitors to this country. Shockingly, an advisor cited the internment of more than 110,000 Japanese Americans during World War II – one of the most shameful moments in our nation’s history – as precedent for targeting Muslims.

We call on you to appoint individuals who have a demonstrated commitment to serving and defending the Constitutional rights of all Americans. It is deeply concerning that you have announced the appointment of individuals to your upcoming Administration with a well documented history of outright bigotry directed at Muslims or advocating that Muslims should not have the same rights as their fellow Americans.  We urge you to reconsider and reject such candidates.

Just as with previous administrations, we will continue to engage all levels of our government to make America great. As engaged citizens, we also pledge to holding you and all elected officials accountable for upholding our Constitution and the equal protections it guarantees. We will raise our voices together with all Americans who share our concerns to protect these values.

We wish you success in upholding our country’s founding principles and for a future of progress for all Americans.