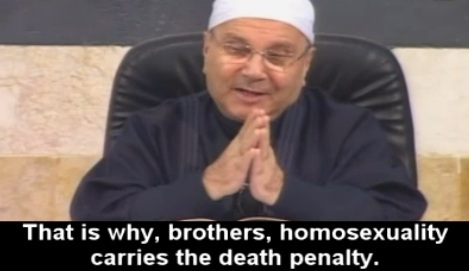 For those who did not see this Channel 9 Investigative report there was a Radical Syrian  Cleric, Sheikh Mohammed Rateb Al-Nabulsi,  who openly calls for the death of Jews and Gays speaking in Central Florida.   Sh. Al-Nabulsi found a welcoming home at the Islamic Society of Central Florida – Imam Musri’s Mosque, AlBir Mosque in Kissimmee, Islamic Society of Pinellas County Mosque, and a Embassy Suites Banquet Hall in Tampa for the American Muslim Leadership Council of Tampa, FL.

In it Al-Nabulsi says, “…the wicked Jews are a collection of defects and imperfections, and a hotbed of vices and evils. They are the worst enemies of God, against Islam and its people, The Almighty says: Certainly you will find the most violent of people in enmity for those who believe (to be) the Jews and those who are polytheists. [Quran 5:82]”

Sh. Nabulsi goes on, “It is not permissible under Sharia to relinquish to the Jews any part of the lands of the Muslims nor to make peace with them, for they are the people of cunning and deception, and the breaking of pacts.

All the Jewish people are combatant…this is essentially an entirely aggressive entity from A to Z. This is the Sharia ruling, This is what many of the Ulema say, the Sharia ruling on Fedayeen activity is that it is permissible. ”

Sheikh Al-Nabulsi has never retracted his statements publicly.  These statements of hatred for all the Jewish people from A to Z, is part of his schadenfreude or worldview.  In the Muslim world, Sh. Al-Nabulsi is a world renowned Islamic scholar and those who support him must also, by default, share his hate filled worldview.

Imam Mohammad Musri on January 7, 2014 invited this Hate Sheikh into his Mosque.  Imam Mursri was interviewed by Channel 9 reporter Field Sutton on why he would invite such a controversial  figure to his Orlando, FL Mosque.  Imam Musri did not condemn  his friend Al-Nabulsi’s hate speech against the Jews.  In fact, Musri ignored those  anti Jewish comments thinking Mr. Sutton was referring only to Sh. Al-Nabulsi’s anti gay remarks.

Imam Musri’s answers appeared to only reference Sh. Al-Nabulsi’s video saying that, “All homosexuals deserve the death penalty” not addressing any of the hate Sheikh’s Anti Jewish comments.  Imam Musri said, “We would not welcome any person or organization that will bash any group,” Musri said, “after the Pulse nightclub attack, he hopes the visiting scholar no longer feels the way he used to feel. “If he does, then it gives us the opportunity to discuss and maybe challenge those views and maybe change minds or hearts,” I’m sorry to tell you  this Imam Musri,  but any reasonable person would want that little detail of calling for the murder of an entire demographic cleared up before inviting him to speak at your Mosque, instead of giving the Hate Sheikh a clever pass.  Imam Musri – I find your cavalier attitude towards your brother Al-Nabulsi’s hate speech and incitement to violence pathologically disturbing.

Imam Musri’s  refusing to condemn Al-Nabulsi’s hate speech against the Jews specifically, creates a dilemma for many in the Orlando Jewish leadership.

For example, Imam Musri co-hosts a interfaith radio show on National Public Radio with Rabbi Steven Engel of the Congregation of Reform Judaism in Orlando.  Rabbi Engel must decide if his personal friendship with Imam Musri is more important than his association with a  radical Syrian cleric who says all Jews are legitimate targets for martyrdom operations and death.  Imam Musri had the opportunity to condemn Sh. Al-Nabulsi on Channel 9 News but never did, one must ask why?  Rabbi Steven Engel and his congregation must ask why?

The afternoon of Sh. Al-Nabulsi’s lecture at Imam Musri’s Mosque we went to ask that exact question, but never got the chance.  Before entering the Mosque, we were confronted by Bassem Chaaban, Director of Outreach for  Imam Musri’s Mosque.  Mr. Chaaban told us, “This is a private event and not open to the public…it was not advertised to the public and for our members only.” We were denied entry and asked to leave.

Nowhere on Imam Musri’s flyer for the Hate Sheikh event does it say ‘Private’ or RSVP required.  The Al-Nabulsi lecture was advertised on the ISCF Facebook page.  Clearly Mr. Chaaban, acting on Imam Musri’s behalf, only wanted Muslim’s in attendance, all others not welcome.

How deep does the hate and intolerance run in the Central Florida Muslim community? There are three Mosques and the American Muslim Leadership Council of Tampa who hold Sh. ‘Hate’ Al-Nabulsi in such high regard they invited him to speak, knowing his visceral hatred for Jews and Gays.

Imam Musri was the voice of the Orlando Muslim community after the Pulse Nightclub terrorist attack.  Imam Musri spoke a message of love, togetherness, and that Islam had nothing to do with the attack by ISIS Jihadi, Omar Mateen.

Imam Musri did an interview next to the Pulse Nightclub with Tim Vargas, local gay leader, and George Stephanopoulos.   Imam Musri was saying how the Pulse Nightclub shooter did not represent Islam and how the Muslim community stands with the Gay community and the entire Orlando community at large.  That was a good and much needed message, only now we learn Imam Musri was not telling the truth.  If Imam Musri was truthful in his interview with George Stephanopoulos,  today he would have condemned Sheikh Al-Nabulsi publicly for his call to murder gays and Jews.  Imam Musri invited a hate cleric to his Mosque as an honored guest for his thousands of Muslim congregants, now he must account for his actions.

This is serious business because Imam Musri is well respected in the Jewish, Christian, Gay, and interfaith communities.  Imam Musri has built these relationships over many years telling these local leaders exactly what they need to hear to build bridges of  friendship.

Then while Imam Musri thinks nobody is looking, he shows what lies underneath his slick polished veneer.  Underneath that veneer of bridge building lies a man who reveres an Islamic scholar who calls for the murder of Jews and Gays.  Imam Musri had the opportunity to set the record straight condemning Al-Nabulsi with Channel 9 News reporter Field Sutton, but he did not.

How many followers of Islam in Central Florida who went to hear the Hate Sheikh speak  agree with his views on the killing of Jews and Gays?

How many people who hear Sheikh Mohammed Rateb Al-Nabulsi’s incitement to violence against Jews and Gays will act upon it?  In light of the Pulse nightclub terrorist attack, Ft. Lauderdale airport  attack,  San Bernardino attack, Ft. Hood terrorist attack, bomb scares to 3 Jewish facilities in Orlando, this question can no longer be ignored.