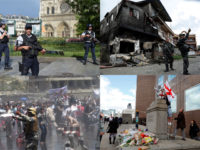 Islamic extremists killed more than 1,620 people during this year’s holiest month for Muslims, marking one of the deadliest Ramadans in modern history, reveals a Breitbart News tally.

The large majority of Ramadan violence victims are Muslims.

At the end of Ramadan on Saturday, the total number of casualties across the world for the entire holy month had reached 3,451 (1,627 murders and 1,824 injuries), more than tripling the 1,150 (421 deaths and 729 injuries) that took place in 2016, considered the deadliest holy month in recent memory.

The 1,627 fatalities this year nearly quadrupled the estimated 421 deaths last year. There were an estimated 160 terror incidents in nearly thirty predominantly Muslim countries during Ramadan 2017.

On the annual Muslim festival of Eid ul Fitr that marked the end of Ramadan Saturday, jihadists attempted to attack Islam’s most sacred Grand Mosque in Mecca, Saudi Arabia, which surrounds the holiest place for Muslims — the Kabaa.

Saudi security troops thwarted the attack, but one of the suspects in the planned assault blew himself up, injuring six foreigners and five of the Sunni kingdom’s forces.

Between Friday and Saturday, Islamic extremists killed 141 people and injured 387 others. The majority the casualties (84 deaths and 282 injuries) took place in Pakistan, which the Pentagon has labeled a jihadi sanctuary.

The Islamic State (ISIS/ISIL) issued multiple messages urging its sympathizers and followers to carry out deadly attacks during Ramadan, namely in the United States, Europe, Russia, Australia, Iraq, Syria, Iran, and the Philippines.

Except for Russia, jihadists carried out attacks in all of the listed locations during the holy month.

Consistent with the years since the group surfaced in 2014, ISIS, including its Boko Haram affiliate, takes the grim title of the world’s most prolific terrorist group during Ramadan 2017, carrying out more attacks than any other jihadist organization.

ISIS-linked jihadists were behind an estimated 60 of the 160 terror incidents (about 40 percent) during Ramadan.

The Taliban, as well as al-Qaeda and its offshoots, has also been involved in the killing and murder of mainly fellow Muslims.

During Ramadan, the majority of Muslims follow the tradition of abstaining from eating, drinking, smoking, having sex, and other physical needs each day, starting from before the break of dawn until sunset.

However, extremists perceive Ramadan as a time when martyrdom and jihad are especially rewarded in paradise, prompting a spike in the terrorist attacks during the period every year.

Islamic extremist groups encourage martyrdom among their sympathizers and followers, promoting the belief that they will be doubly rewarded if they fatally castigate infidels during Ramadan.

In previous years, the fatalities have included women, children, and members of the Christian minority. This year is no exception.

Although Muslims of all sects make up the majority, there are members of a wide variety of ethnic and religious groups among the victims: Westerners of all ethnicities, Christians, Asians, Sunnis, Shiites, and Arabs, among others.

The West, including the United States, has not been immune to the Ramadan carnage this year.

As this list was compiled by collecting news reports on a daily basis throughout the holy month, some death tallies from individual attacks may have been updated after the attack was added to our list. Thus, the list remains subject to updates.

All the terrorist attacks during Ramadan 2017, as documented by Breitbart News, include: