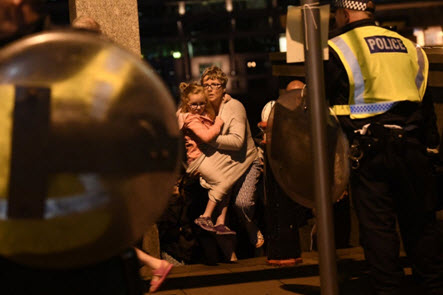 After terror attacks, we often hear from Western media and politicians that we must accept terrorist attacks as the “new normal.”

For Western citizens, this phrase is dangerous.

Islam’s doctrine of jihad, expansion and dawah (Islamic outreach, proselytizing) rely heavily on the use of both terror and luring. Targhib wal tarhib is an Islamic doctrine that means “seducing (luring) and terrorizing” as a tool for dawah, to conquer nations and force citizens to submit to Islamic law, sharia. It amounts to manipulating the instinctive parts of the human brain with extreme opposing pressures of pleasure and pain — rewarding, then severely punishing — to brainwash people into complying with Islam.

Most ordinary Muslims are not even aware of this doctrine, but Islamic books have been written about it. Mainstream Muslim sheikhs such as Salman Al Awda have discussed it on Al Jazeera TV. On a show called “Sharia and Life,” Al Awda recommended using extremes “to exaggerate… reward and punishment, morally and materially… in both directions”. “The use of terror under this doctrine,”‘ he said, “is a legitimate sharia obligation.”

People in the West think of terror as something that Islamic jihadists inflict on non-Muslims, and it is. But terror is also the mechanism for ensuring compliance within Islam. Under Islamic law, jihadists who evade performing jihad are to be killed. Terror is thus the threat that keeps jihadists on their missions, and that make ordinary Muslims obey sharia.

An online course for recruiting jihadists contains this description:

“Individual Dawa depends on eliciting emotional responses from recruits (and building a personal relationship). Abu ‘Amr’s approach illustrates a recruitment concept called al-targhib wa’l-tarhib, which is a carrot-and-stick technique of extolling the benefits of action while explaining the frightening costs of inaction. The concept was introduced in the Qur’an and is discussed by many Islamic thinkers exploring the best way to call people to Islam (several scholars, for example, have written books titled al-targhib wa’l-tarhib). According to Abu ‘Amr, recruiters should apply the concept throughout the recruitment process, but emphasize the benefits of action early in the process and the costs of inaction later.”

In other words, recruiters of jihadists should start by emphasizing the “good stuff” first, the “lure” — the future glory, supremacy and fulfillment of every lustful wish, such as virgins in heaven. Later, they should threaten the recruits with “terror” and shame — the consequence if they fail to participate in jihad.

Part of the tarhib or “terrorizing” side of this doctrine is to make a cruel example of those who do not comply with the requirements of Islam. That is the reason Muslim countries such as Saudi Arabia and Iran, and entities such as ISIS, intentionally hold ceremonial public beheadings, floggings, and amputation of limbs. Countries such as Egypt, Jordan, and Turkey are more discrete, but they tolerate and support honor killings; killing apostates; beating women and children, and torture and murder in their jails. The doctrine of targhib and tarhib is alive and well, not just in Islamic theocracies but also in the so-called “moderate” Muslim countries.

Islam has been using these “pleasure and pain” brainwashing techniques, and cruel and unusual punishment, from its inception and until today. While the Bible — the Western Judeo-Christian tradition — is in harmony with, and nurtures, kindness in human nature, Islam does the opposite: it uses the human instincts for self-preservation and survival to break the people’s will and brainwash them into slavish obedience.

Like the majority of Muslims, I never heard of this foundational Islamic doctrine when I was growing up in Egypt, but have felt the impact of this doctrine on my life — in every aspect of Islamic culture; in Islamic preaching, in my Islamic family relations; in how Islamic governments operate and how people of authority, in general, treat the people under them.

The Islamic doctrine of “lure and terror” has produced a culture of toxic extremes: distrust and fear, pride and shame, permission to lie (“taqiyya“), and rejecting taking responsibility for one’s actions.

Having lived most of my life under Islam, I am sad to say that people the West calls “moderate Muslims” are frequently, in fact, citizens who have learned to live with and accept terror as normal. For centuries, many have made excuses for terror, condemned victims of terror, remained silent or equivocal, and have even compromised with the terrorists to survive. The Islamic culture in which I lived looked the other way when women were beaten. When girls were honor-murdered, the question was “what did she do?” instead of “how could that be?” When Christians were killed and persecuted, many blamed the Christians for their own persecution at the hands of Muslims. The normal Islamic response to terror became: “None of my business.”

And now the Islamic doctrine of Targhib wal Tarhib, has moved to the West and aims at changing Western humanistic culture. It would replace respect for human rights, caring for one’s neighbor and the values of freedom and peace, with the values of bondage, terror, tyranny and fear.

Islamic jihad has always counted on people in conquered lands eventually to yield, give up and accept terrorism as part of life, similar to natural disasters, earthquakes and floods.

It did not take long for the Islamic doctrine of Targhib wal Tarhib to work on the psyche of Western leaders and media, who are now telling us to live with it as the “new normal.” Islam counts on turning everyone into “moderate” Muslims who will eventually look the other way when terror happens to the person next to you.