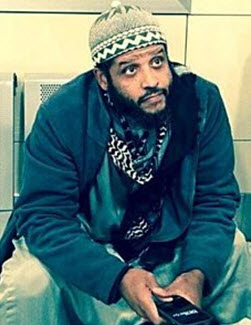 Erlier today at the federal courthouse in Brooklyn, New York, Tairod Pugh, an American citizen and former member of the U.S. Air Force, was sentenced to 35 years in prison following his March 9, 2016 trial conviction for attempting to provide material support to a foreign terrorist organization, the Islamic State of Iraq and Syria (“ISIS”), and obstruction of justice. The sentence was imposed by United States District Court Judge Nicholas G. Garaufis.

“The defendant turned his back on his country, and the military he once served, to attempt to join a brutally violent terrorist organization committed to the slaughter of innocent people throughout the world,” stated Acting United States Attorney Rohde. “Today’s sentence sends a powerful message that those who support terrorism will be brought to justice by this Office and our law enforcement partners, undeterred by obstructionist efforts.” Ms. Rohde expressed her appreciation to the members of the FBI’s Joint Terrorism Task Force, which comprises federal, state, and local agencies from across the region, for their work on the investigation.

“With this sentence, Tairod Pugh – an American citizen and former member of the U.S. Air Force where he served as an aircraft mechanic – is being held accountable for attempting to travel to Syria to provide material support to ISIS,” said Acting Assistant Attorney General Boente. “We are committed to bringing to justice all those who seek to provide material support to foreign terrorist organizations. I would like to thank all of the agents, analysts, and prosecutors who are responsible for this result.”

“The alarming reality of this case is that Pugh served in the U.S. military but ultimately traded in his pledge to defend the United States to defend the Islamic State,” stated Assistant Director-in-Charge Sweeney. “Today’s sentencing should send a strong message to those who seek to support terrorists groups — they will face serious consequences for their actions. The FBI’s Joint Terrorism Task Force will continue to work with our partners, both here and abroad, to prevent acts of terrorism. This investigation demonstrates the importance of law enforcement coordination and collaboration here and around the world.”

“The defendant broke his oath to defend our nation and instead made repeated attempts to join ISIL on the battlefield of Syria,” stated Commissioner O’Neill. “The work of protecting New York City from those who seek to harm us is ever present. I am thankful for the work of so many whose diligence helps keep this city safe.”

Before traveling overseas to try to join ISIS, the defendant served in the U.S. Air Force as an avionics instrument system specialist and received training in the installation and maintenance of aircraft engines, navigation, and weapons systems. The defendant later worked as an airplane mechanic for numerous companies in the United States and Middle East. He lived abroad for more than one year before his arrest in this case.

On January 10, 2015, the defendant traveled from Egypt to Turkey in an effort to cross the border into Syria to join ISIS to engage in violent “jihad.” Turkish authorities denied the defendant entry and returned him to Egypt. At the time of his detention, the defendant was carrying a laptop computer and four USB drives that he had stripped of their plastic casings in an effort to destroy their contents and thereby make them unavailable to investigators. The defendant also was carrying solar powered chargers, compasses, a black balaclava, and clothing suitable for war-torn Syria. Foreign government officials quickly deported the defendant to the United States, where the FBI closely monitored him, relying in part on a covert undercover employee who encountered the defendant at John F. Kennedy International Airport. The defendant was arrested on January 16, 2015, in Asbury Park, New Jersey, and thereafter indicted in the Eastern District of New York.

The defendant’s laptop contained Internet searches for “borders controlled by Islamic state,” the ISIS propaganda video “Flames of War,” as well as terrorist videos he had downloaded, including ISIS execution videos. In the months before he attempted to join ISIS, the defendant made statements to coworkers and on social media establishing his support for ISIS, including advising Facebook followers to “support [ISIS] with your bodies.”

Shortly before he left Egypt for Turkey on his way to Syria, the defendant drafted a letter proclaiming, “I am a Mujahid. I am a sword against the oppressor and a shield for the oppressed. I will use the talents and skills given to me by Allah to establish and defend the Islamic State. There is only 2 possible outcomes for me. Victory or Martyr.”