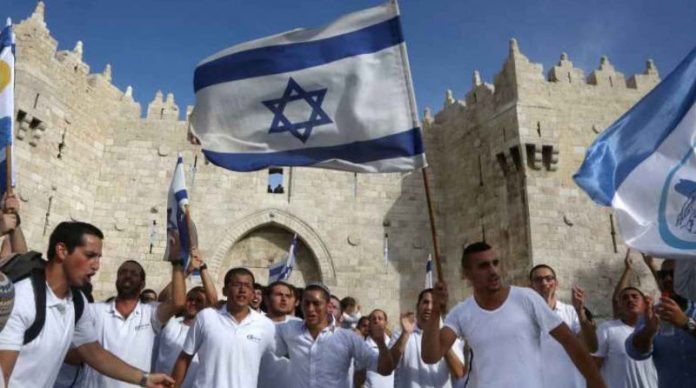 Wednesday, May 24th, 2017 marked the 50th anniversary of “Yom Yerusalayim” or “Jerusalem Day.” This relatively new holiday is celebrated by Israelis, but also by large segments of the Jewish diaspora.  It is a new addition to the Hebrew calendar, celebrating the unification of the city shortly after the Six Day War of June, 1967.  The Israel Defense Forces (IDF) recaptured the Old City of Jerusalem and its Jewish Quarter, which includes the Western Wall – a remnant of Solomon’s Holy Temple.

In 1948, the Arab Legion, commanded by British officer John Bagot Glubb, better known as Glubb Pasha, forcibly took the Old City of Jerusalem after a lengthy siege, and expelled all the Jewish residents within the Jewish Quarter.  East Jerusalem and the Jewish Quarter became “Judenrein,” or cleansed of Jews.  Those not expelled were killed.  In June, 1967, 19 years later, the IDF returned the Jewish Quarter back to its rightful owners.  Jerusalem was however celebrated as the capital of the Jewish people since the time of King David, approximately 1000 BCE, or for over 3,000 years.

On “Jerusalem Day,” thousands of Israelis flocked to the city to express their solidarity with the unified city of Jerusalem as Israel’s eternal capital.  This show of solidarity was particularly poignant this year as it coincided with U.S. President Donald Trump’s visit to Israel, and his extraordinary tour of the Jewish Quarter and the Western Wall.  President Trump, during his campaign for the U.S. Presidency, promised to move the U.S. embassy from Tel-Aviv to Jerusalem, its historic capital.  “Jerusalem Day” defies the international community judgement on Jerusalem, which has never “approved” the “unification” of the city under Israeli sovereignty, and many countries have not recognized Jerusalem as the capital of the Jewish state.  This singular anti-Jewish bias must not stand.

To add insult to injury, UNESCO, the United Nations Educational, Scientific and Cultural Organization based in Paris, reported, according to the Qatari based Al-Jazeera (May 2, 2017) that “UNESCO’s executive board passed a resolution that criticizes Israel’s actions in occupied Jerusalem and the Gaza Strip. The resolution, which describes Jerusalem as “occupied” and declares Israel’s sovereignty over the city “null and void,” was backed by 22 countries, a UNESCO spokesperson said.  The resolution was submitted by Algeria, Egypt, Lebanon, Morocco, Qatar and Sudan…all Arab-Muslim states.  It calls on Israel as the “occupying power,” to cease “persistent excavations, tunneling, works and projects in East Jerusalem,” which Palestinians want as the capital of their future state.”

The 22 – 10 vote with 23 abstentions was taken on Israel’s Independence Day, following a highly controversial UNESCO resolution passed last October that ignored Jewish connections to the Western Wall and Temple Mount sites, decreeing in essence that the Western Wall was “occupied territory.” Additionally, the resolution designated Judaism’s second holiest site, the Tomb of the Patriarchs and Matriarchs (Machpela Cave), and Judaism’s third holiest site, Rachel’s Tomb, “as integral parts of the Occupied Palestinian Territory.  The resolution also claims that it is “safeguarding” the cultural heritage of Palestine,” when in fact no such country exists.

Suffice it to say that during the 19 year Jordanian occupation of Jerusalem Judea and Samaria, Jews were prohibited from visiting their holy places including the Western Wall, the Machpela Cave in Hebron, Rachel’s Tomb in Bethlehem, or Joseph’s Tomb in Nablus.  The Jordanians desecrated Jewish graves and tombs on Mount Olive, using head stones to pave roads.  Access to holy places for Christians was also restrictive albeit, not as prohibitive as it was for Jews.  The upkeep of religious sites in Jerusalem by the Jordanians was abysmal.

This reporter arrived at the Western Wall days following its capture by the IDF in 1967.  The Western Wall plaza, familiar to many of its visitors today as an open and inviting space, was a dumping ground for garbage, which was strewn all over. Many wild bushes growing everywhere prevented easy access to the Wall.  It was in fact a deliberate insult to Judaism, which the world community failed to protest.  Jordan itself, like Saudi Arabia and some of the Gulf States, were “Judenrein,” where Jews were not permitted to enter, let alone live as citizens.

It is particularly galling and hypocritical on the part of the counties sponsoring the Jerusalem resolution on behalf of the Palestinians who have called Israel, “the ‘occupying power,’ to cease “persistent excavations, tunneling, works and projects in East Jerusalem,” which Palestinians want as the capital of their future state.” Israel is not an “occupier” in Jerusalem, since Jerusalem has been the very heart of the Jewish nation for millenniums.  Moreover, Israel liberated the Old City of Jerusalem from its Jordanian occupiers.  In fact, the Palestinian-Arab clergy and politicians fear Jewish excavations for obvious reasons.  Archeological finds have confirmed the Jewish presence in the city for over 3,000 years, as King David and Solomon’s capital, as well as the capital of the Kings of Judea, and later the capital of the Hashmoniam Dynasty.  The Titus Arch in Rome clearly depicts the Romans ransacking of the Jewish Temple vessels in Jerusalem, in 70CE.

While Jerusalem is mentioned in the Old Testament over 500 times, it is never mentioned in the Quran, the Islamic holy book.  Many Muslims claim this is a lie, and assert that the word Al Aqsa (the mosque on Temple Mount) means Jerusalem.  Al Aqsa literally means “the Farthest Mosque” and does not in any way mean Jerusalem.  Jerusalem was never a capital of an Arab state or empire.  Muslims never revered Jerusalem as Jews and Christians do.  Muslims turn their back on the Temple Mount when they pray. Instead, they face in the direction of Mecca, Saudi Arabia.  The hypocrisy, however, does not end here. The Arab sponsored resolution accuses Israel of “tunneling” when in fact, it has been clearly demonstrated that it is Hamas, the Gaza based Palestinian Islamist terrorist organization that uses tunneling for the purpose of murdering Jews, be it civilians or soldiers, children or the elderly.

President Trump, much like many of his predecessors, both democrat and republican, while promising to move the U.S. Embassy in Israel to Jerusalem, has given in to Arab-Muslim pressure.  For Israelis though, Jerusalem will always be the country’s spiritual and political capital.  Lest we forget, ‘Next Year in Jerusalem’ are the last words that conclude the Passover Seder, and many other Jewish occasions. The world may begrudge the Jews their fulfilled dream of once again being the sovereign in Zion. For Israelis however, “Jerusalem Day” celebrates the fulfillment of two millenniums of yearning, and that will never cease.