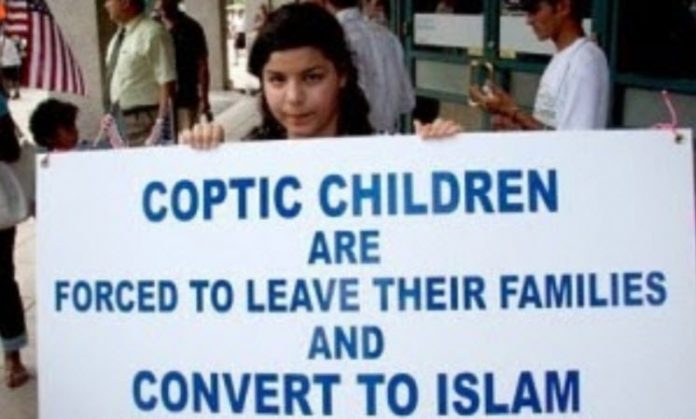 What are we to make of the glaring contradiction between the Koran’s claim that “there is no compulsion in religion” (2:256) and the many other verses that call for war, slavery, and death to those who refuse to submit to Islam (9:5, et al)—to say nothing of the militant behavior of the prophet of Allah, Muhammad?  This is the question Stephen M. Kirby examines in his new book, Islam’s Militant Prophet: Muhammad and Forced Conversion to Islam.

Rather than offer speculations or cite nearly 1,400 years of Islamic history that is heavy laden with forced conversions, Kirby answers the question in an objective and meticulous fashion—in a fashion that any Muslim will be hard pressed to counter: he focuses exclusively on the career of Muhammad, from its beginnings in 610 till his death in 632, as recorded in Islam’s primary sources, the Koran and Hadith, and as understood or interpreted by Islam’s most authoritative scholars, such as Ibn al-Kathir.  Along the way, readers are provided useful explanations—again, directly from Islam’s learned scholars themselves—of arcane or misunderstood doctrines, such as abrogation, which is essential for any exegesis.

The long and short of it all?

The command of “no compulsion in Islam” was a unique command that had doctrinal authority for only a little over two years.  It was abrogated both by the Sunnah and the Koran.  Its short lifetime was preceded and followed by commands that non-Muslims were to be given the option of converting to Islam, fighting to the death, or, at times, paying the Jizyah.  Muhammad was indeed the militant prophet of a militant religion that supported forced conversions to Islam.

Before reaching this conclusion, Kirby offers example after example of Muhammad giving non-Muslims—pagan Quraysh, Jews, and Christians, almost always people who had no quarrel with him aside from rejecting his prophetic authority—two choices: convert or suffer the consequences, the latter of which often manifested as wholesale massacres.

It’s also noteworthy that, according to Islam’s earliest histories, sincere belief in Muhammad’s prophet claims is lacking.  The overwhelming majority of those who converted to Islam did so either under duress—literally to save their heads—or else to be part of Muhammad’s “winning team.”  Conversion was the price for one man, Malik bin Auf, to get his kidnapped family back from Muhammad.

Insincere, coerced conversion is especially evident in Muhammad’s conquest of Mecca.  When Islam’s prophet, at the head of a vast army—which had already put several tribes to the sword for refusing to convert—was approaching the polytheists of Mecca, the latter were warned: “Embrace Islam and you shall be safe.  You have been surrounded on all sides.  You are confronted by a hard case that is beyond your power.”  When the leader of Mecca, Abu Sufyan—who had long mocked Muhammad as a false prophet—approached the Muslim camp to parley, he too was warned: “‘Embrace Islam before you lose your head.’  Abu Sufyan then recited the confession of faith and thus he entered Islam.”  The Meccans soon followed suit.

Rather tellingly, the Muslim historians who recorded these non-Muslim conversions to Islam saw no contradiction between the coerced and insincere nature of the conversions and the Koran’s claim that “there is no compulsion in religion.”  For instance, in Muslim historian Taqi al-Din al-Maqrizi’s (d. 1442) multivolume history of Egypt, anecdote after anecdote is recorded of Muslims burning churches, slaughtering Christians, and enslaving their women and children.  After each incident, the pious Muslim historian concludes with, “Under these circumstances a great many Christians became Muslims.”  (One can almost detect in inaudible “Allahu Akbar.”)

Aside from sporadic bouts of persecution, the entrenched dhimmi system (see Koran 9:29)—itself a form of coercion—saw the increasingly impoverished Christians slowly convert to Islam over the centuries, so that today they remain a steadily dwindling minority.  In The Arab Conquest of Egypt, Alfred Butler, a 19th century historian writing before the age of political correctness, highlights this “vicious system of bribing the Christians into conversion”:

[A]lthough religious freedom was in theory secured for the Copts under the capitulation, it soon proved in fact to be shadowy and illusory. For a religious freedom which became identified with social bondage and with financial bondage could have neither substance nor vitality.  As Islam spread, the social pressure upon the Copts became enormous, while the financial pressure at least seemed harder to resist, as the number of Christians or Jews who were liable for the poll-tax [jizya] diminished year by year, and their isolation became more conspicuous. . . . [T]he burdens of the Christians grew heavier in proportion as their numbers lessened [that is, the more Christians converted to Islam, the more the burdens on the remaining few grew]. The wonder, therefore, is not that so many Copts yielded to the current which bore them with sweeping force over to Islam, but that so great a multitude of Christians stood firmly against the stream, nor have all the storms of thirteen centuries moved their faith from the rock of its foundation.

In short, the Koran’s claim that “there is no compulsion in religion” seems more of an assertion, a statement of fact, than a command for Muslims to uphold.  After all, it is true: no Muslim can make a non-Muslim say the words “There is no god but Allah and Muhammad is the messenger of Allah.”  But that doesn’t mean they can’t enslave, extort, plunder, torture, and slaughter those who refuse.