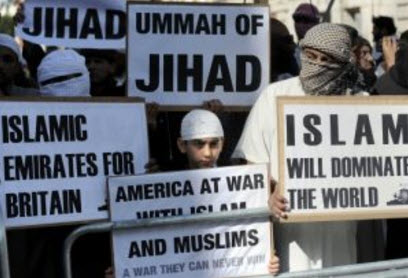 “Fight and slay the unbelievers wherever you find them, capture them and besiege them, lie in wait for them in each and every ambush.”

Since 9/11/01, Americans have been told by their leaders the problem the U.S. faces from “global terrorism” has nothing to do with Islam.  The threat, so the leaders say, is from “extremists” – or some other equally useless euphemism.  Now that barbaric violence perpetrated by muslims has become commonplace around the world, the enemy’s talking points (read: information operation) have adjusted, and U.S. and other Western leaders and analysts have followed suit and adjusted their talking points as well.

Now we are told the problem is “Wahhabi Islam” or “a 7th century version of Islam” or “Salafi Islam” or muslims following a “perverted version of religion” or anything which has nothing to do with authentic doctrinal Islam.

All of these phrases are meant to mislead the non-muslim community into believing there is an authentic version of Islam which is peaceful, loving and non-violent. 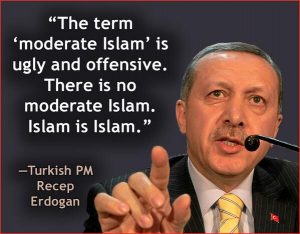 Actually, the Global Islamic Movement, including all sharia-adherent Islamic organizations and sharia-adherent muslims, does practice “Salafi” Islam and a “7th century version” of Islam.

The al Salaf al Salih – Salafi – are the obedient and “rightly-guided predecessors” in Islam.  They are those who follow the commands of Allah found in the Koran and the example of Islam’s prophet Mohammad most closely.  In other words, they follow Islam.

7th century Islam is 21st century Islam.  There is no difference.  Those who attempt to differentiate are implying Islam has changed somewhere along the way.  This hypothesis has no support from authoritative Islamic doctrine and never will.  Muslims who do not adhere to sharia do not constitute another “version” of Islam.  Muslims who do not obey Allah’s commands found in the Koran and the example of Mohammad are called “Apostates” and are killed under sharia. 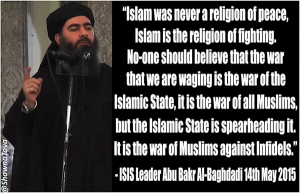 While various cultures and schools of Islamic jurisprudence have variations on certain aspects of the sharia’s application in certain communities, all sharia does and always has mandated war against the non-muslim world until the entire earth is under sharia.

Islam requires all muslims to obey the Koran and the example of Islam’s prophet Mohammad.

Did Allah change his mind or make a mistake when he revealed the contents of the Koran to Mohammad?

If not, how and when did Islam change?  It has not changed.

What did Islam’s prophet get wrong when he married a 6 year old, beheaded hundreds of Jews at the Battle of the Trench, tortured, condoned the killing of those who mocked him, or commanded war against all non-muslims? 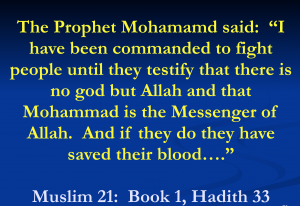 In strategizing to counter the Islamic threat, there is no room in a war plan for input from anyone articulating the threat in terms that are not clear and factual (truthful).  When analysts, pundits, or “experts” claim the Islamic threat of ISIS or the Muslim Brotherhood is “un-Islamic,” they are either ignorant and unfit to offer their opinion, or lying.  Both support the enemy.

The only times in history Islam has ever been “non-violent” is when non-muslim nations had the muslim ummah (global muslim community) under their boot.  There is no example in history when irrational (or rational) actors fully intent on world domination were talked out of their position.

ISIS, Al Qaeda, the Muslim Brotherhood/Hamas, Tabligi Jamaat, Hizbollah, Islamic Jihad, Boko Haram, Abu Sayef, and all the other Islamic jihadi organizations say they are fighting jihad in the cause of Allah to establish sharia under a caliphate.

A reasonable discussion about solutions can only happen when those involved in the discussion understand the problem.

In the wake of tremendous violence in Europe and the United States perpetrated by muslims against non-muslims, the threat must be clearly articulated by leaders.  Islam is the problem.  Islam is the threat.  Islam commands muslims to wage jihad against the non-muslim world until sharia is the law on the entire earth.  There is no other “version” of Islam.

All thoughtful, realistic strategies for victory must begin there.  Leaders who fail to know and speak truth, and deal with this threat realistically and immediately should be removed from their positions for the sake of the safety/security of their citizens, and for the sake of the survival and triumph of the West.