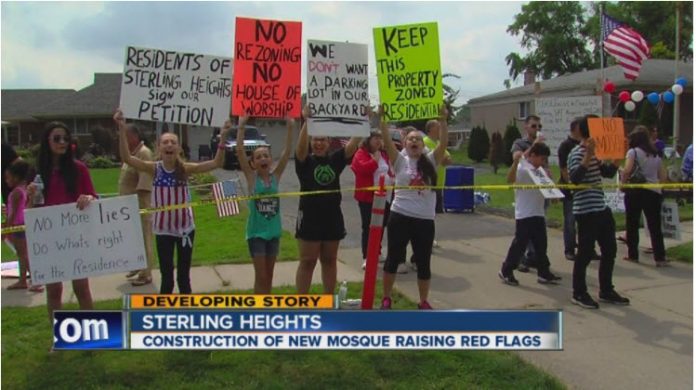 The Department of Justice has become an advocate for the establishment of mosques in America. It is as if there were some congressional affirmative action mandate. The DOJ’s own statistics reveal a sharp escalation in intervention efforts on behalf of Islamic complainants, mostly involving mosque disputes with local zoning authorities.  Alarmingly, these interventions reveal a pattern of generous settlements that benefit mosques while bypassing municipal laws and disregarding legitimate neighborhood concerns.

During the Obama Presidency, DOJ lawyers ran roughshod over local officials, as long as the complaining party was a mosque.  Trump’s Justice Department must reverse these tendencies.

The atmosphere of DOJ intimidation cannot be overstated. Negotiated settlements between the DOJ, local zoning authorities, and mosque officials take place against a backdrop of DOJ threatening long, prohibitively costly litigation. The drive for ever more concessions, and more cash, confronts communities whose small governments cannot compete with DOJ’s $28 billion budget and legions of lawyers. Importantly, DOJ treats these settlements as if they were precedents even though, by sidestepping the courts, the settlements bypass judicial precedents that could protect legitimate community interests.

Just one example of neighborhood hardships that result from deferential permit agreements, the Dar al Farooq mosque in Bloomington, Minnesota is currently holding services for the entire month of Ramadan with overflow parking and lighted lots until 1:00 and 3:00 a.m.—in a residential neighborhood.

The Sterling Heights settlement is illustrative of abusive DOJ meddling.

The mosque had applied to build a 28,000 square foot facility on 4.35 acres of land. The building’s dome was to be 58 feet high and the minarets 66 feet high. The surrounding neighborhood has been settled by many Chaldean Christians who fled Iraq and Islamist oppression. An imposing Islamic structure was not met with enthusiasm to put it mildly. But federal law focuses on whether the decision-makers are biased. It demands that local government officials give all sides equal consideration. It does not require that neighborhood residents greet this kind of application with enthusiasm.

In this case, there were many legitimate concerns that the local planning commission investigated, concerns that contributed to the unanimous conclusion that the mosque was ineligible for the indicated property. Indeed, the major disputes arose because mosque representatives provided incomplete information and they were unwilling to address zoning concerns. 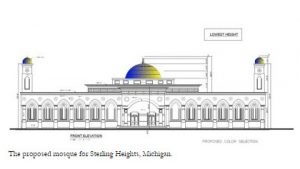 But why would they negotiate when they know DOJ is their ace in the hole, ready to presume the assertion of legitimate community interests is a pretext for anti-Muslim bias? The strategy of making a bee-line to DOJ rather than working in good faith to address community zoning concerns proved successful. The DOJ-administered settlement disregarded dire traffic congestion, including a nearby intersection listed in the highest accident category. It ignored glaring parking issues, a massively imposing structure for the size of the lot, and vast undesignated square footage.

The settlement bypassed local ordinances and state law, allowing the mosque virtually unlimited activity, provided that arrangements for a shuttle and overflow parking lot were merely attempted. The height of the dome and minarets were left essentially unchanged. No answers were provided to show how, and when, 25,000 square feet of the building would be utilized.

The terms of this settlement were so egregious that the American Freedom Law Center has filed a lawsuit challenging the disregard for neighborhood residents, local zoning authority, and state law.

Announced in late May, the Basking Ridge settlement was also a blow to community members. Residents organized early to defend the residential and historic character of a neighborhood called Liberty Corner. Again, it should not have been surprising that a religious land use application would be met with controversy. And, again, the applicants equated frustrations on the part of the community with anti-Islamic bias on the part of the decision-making officials.

The years-long series of hearings and deliberations were contentious. They reflected recalcitrance on the part of the applicant and a problematic search for solutions on the part of township officials. The final settlement required the community to pay $3.25 million. It made minimal provision for 50 parking spaces and an additional allocation of at least ten non-paved parking spots. Inevitably, the residential lot will have overflow parking in all areas that are not clearly designated otherwise.

In flagrant violation of free speech principles, moreover, residents are prohibited from uttering comments about “Islam” or “Muslims” at the final local hearing. Most offensive to the township, the settlement arrogantly included a rewrite of local zoning law. Its terms coerce the community to permit religious worship sites in institutional, commercial and residential zones on the same conditions as other assembly uses—comparable to even clubs and day care facilities.

Concerns of local residents were deemed out-of-bounds and even banned from discussion during the hearings.

Of critical importance, these DOJ settlements are used to punish cities in an accusatory and invasive fashion. The agreements typically require that cities submit to intensive DOJ monitoring for five years. Reports must be filed every six months. Compliance signs are required at city hall, in newspapers, and on the internet. In the absence of evidence that they’ve engaged in discrimination, officials must undergo training against it.

Not only does DOJ monitor a city’s actions related to the mosque and all other religious land use applications; DOJ has also required that documents on complaints to law enforcement about mosque activity and reported “harassment” of mosque participants be collected for retrieval by the DOJ.. That is, notwithstanding the centrality of mosques to several of DOJ’s own terrorism prosecutions—in which they have been proven to be used for jihadist incitement, recruitment, training, fundraising, and even the storage and transfer of weapons—DOJ implies that complaints and suspicions about mosque activity must be motivated by invidious discrimination. Law-enforcement officials like to tell the public, “If you see something, say something.” Do they mean it? Or are they actually instilling the paralysis that induced a San Bernardino resident, out of fear of being thought a bigot, to refrain from reporting suspicions about the neighborhood jihadists who later murdered 14 people?

The RLUIPA (Religious Land Use and Institutionalized Persons Act) governs religious land use decisions. Congress passed this law unanimously for the purpose of giving religious applicants a fair shot at achieving permit approvals. Congress intended that religious applicants would not be “substantially burdened” and that they would be treated on “equal terms” with other assembly uses. The courts have been inconsistent in interpreting this law, and almost every federal appellate circuit has a different approach. The Supreme Court has not ruled on the religious land use parts of the law.

Over the last few years, DOJ has sought to make it easier for mosques to bring lawsuits.  Lawyers at the notorious Civil Rights Division have pressed arguments that would allow discrimination to be proven by tenuous circumstantial evidence—including comments made by private citizens at a public hearing, which has the obvious effect of chilling speech—notwithstanding that speech is a civil right, the kind the Civil Rights Division exists to protect. So in addition to citing unequal treatment, the mosque applicant strategy focuses on discrimination charges by compiling examples of locals expressing what DOJ calls “naked animus.”

Therefore, when officials drill down on practices that are not conventional, like peak services on Friday when traffic may coincide with school hours, or comparing Ramadan as it lasts for a month with a one-time Easter or Christmas service, it may add to the legal appearance of “animus.” In essence, DOJ has taken justifiable community angst and transmogrified it into damning circumstantial proof of discrimination.

Predictable rule-application and practical limits are critical to the compatible mixing of assembly and residential uses of land. As the courts have said, RLUIPA was passed to provide equal terms for religious institutions but “not special treatment.” DOJ has been acting like RLUIPA intends special treatment, especially for one privileged group.