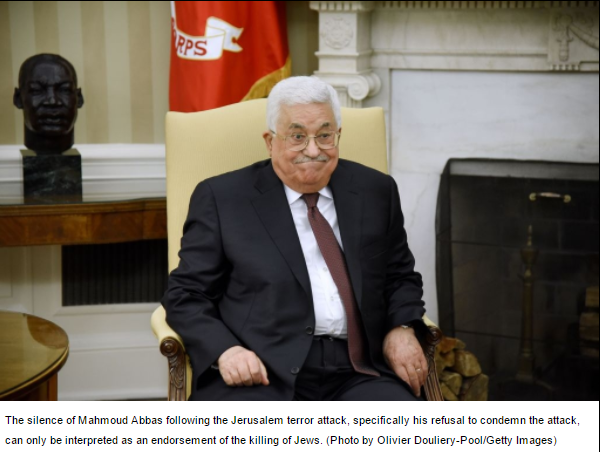 President Mahmoud Abbas’s Palestinian Authority (PA), which is funded by Americans and Europeans, has once again chosen to maintain silence following a terror attack perpetrated by Palestinians. This silence of Abbas and his PA leadership, specifically their refusal to condemn the terror attack, can only be interpreted as an endorsement of the killing of Jews.

For many Palestinians, the stabbing murder of a 23-year-old Israeli Border Police officer in Jerusalem on June 16 is an act of “heroism” that proves that the “revolution against the Zionist entity will continue until the liberation of Palestine, from the (Mediterranean) sea to the (Jordan) river.”

For many Palestinians, the three terrorists who murdered the young woman, Hadas Malka, are “heroes” and “martyrs” who will be rewarded by Allah in Paradise.

Moreover, in a move reminiscent of a demented Alice in Wonderland, Abbas’s ruling Fatah faction, which is often described by Westerners as “moderate” and “pragmatic,” publicly blasted Israel for killing the three terrorists who murdered the policewoman and wounded several others.

In a statement published in Ramallah shortly after the terror attack, Fatah “condemned the Israeli occupation forces for killing three young Palestinian men in East Jerusalem.” It said that the killing of the three terrorists “proves that the Israeli government is pursuing its policy of escalation.” Fatah called on the international community to “seriously look into providing protection for the defenseless Palestinian people.”

The Fatah statement failed to mention that the three Palestinian “young men” were armed with knives and a homemade submachine gun. Nor did Fatah mention a word about the Border Police officer who was stabbed to death in the terror attack.

Such a statement could never have been published without the approval of Abbas and his top cronies in Ramallah. They even seem to have endorsed the Fatah communiqué by publishing it on the website of the PA’s official news agency, Wafa. This agency is managed and funded by the PA, which also appoints the editors and journalists working there.

This is the twisted logic of Abbas and his people: How dare Israeli police officers shoot terrorists armed with knives and a machinegun and prevent them from killing more Jews?

Fatah spokesperson Osama Qawassmeh went as far as accusing Israel of committing a “war crime” by killing the terrorists and thwarting a bigger attack. He called on the international community to condemn Israel for the “cold-blooded” killing of the three terrorists in Jerusalem, dubbing it a “cruel crime.” Qawassmeh, who is considered a trusted advisor and confidant of Abbas, seized the opportunity to heap praise on the terrorists, describing them as “martyrs.” Palestinians, he added, should remain faithful to the “blood of the martyrs” by “holding on to their lands and holy sites and defending them.”

One wonders: how does this public endorsement of the Jerusalem terror attack and the terrorists stand up to Abbas’s promise to US President Donald Trump to stop anti-Israel incitement and “promote a culture of peace” among Palestinians?

This is but further proof in an endless string of damning evidence concerning the ‘peace lies’ spouted by Abbas and his PA. The PA president is always among the first to denounce terror attacks around the world, including Britain, France and Germany. Yet when Palestinians murder Israelis, they suddenly become “heroes” and “martyrs.”

How would the British government and public have reacted had someone condemned the British police for killing the three terrorists who carried out the recent London Bridge attack?

How would the British government and public have reacted had the international media run headlines such as, “British policemen kill three Muslim men in London attack?” This is precisely how Abbas’s media outlets — and the BBC — reported on the Jerusalem terror attack: “Israeli policemen shoot dead three Palestinians in Jerusalem” and “Three Palestinian youth martyred at the hands of Israeli occupation policemen.”

Hamas, notably, was the first party to applaud the Jerusalem terror attack, saying it proves that the Palestinian intifada was continuing and would escalate.

The Popular Front for the Liberation of Palestine (PFLP), a Marxist Palestinian terror group, also joined the chorus of those heaping praise on the terrorists for murdering the Israeli policewoman. Hamas and the PFLP have claimed responsibility for the “heroic operation” and dismissed as “false” a statement by ISIS taking credit for the attack.

To be clear: the two terror groups are furious with ISIS for attempting to rob them of the “honor” of murdering a young policewoman on the streets of Jerusalem. This is the surreal reality in the Middle East today.

Not to be left behind in the promotion of Jew-killing, Palestinians across the political spectrum took to social media to applaud the latest terror attack and express their jubilation over the murder of the policewoman.

In innumerable postings on Facebook and Twitter, dozens, if not hundreds, of Palestinians praised the terrorists, describing them as “heroes” and “martyrs.” They particularly expressed excitement over the use of a homemade submachine gun (often referred to as a “Carl Gustav“). This type of weapon is often produced in workshops in various parts of the PA-controlled territories in the West Bank.

The Palestinians also expressed deep satisfaction that the terrorists chose to carry out their attack during the holy month of Ramadan. They pointed out that the three terrorists, who were fasting, had chosen to carry out their attack during Ramadan because this was the surest and fastest path to Paradise. “There is nothing more pure and sacred than killing the infidels and Jews than when one is fasting during Ramadan,” remarked some of the Palestinians.

There is documented, widespread jubilation in the Muslim world about this and other terror attacks perpetrated not only by Palestinians against Israelis, but — contrary to the statements of many in the West — by many Muslims against all “unbelievers”: if “infidels” are murdered during Ramadan, their killers expect to be “doubly rewarded in Paradise.”

Bassam Tawil is a Muslim based in the Middle East.