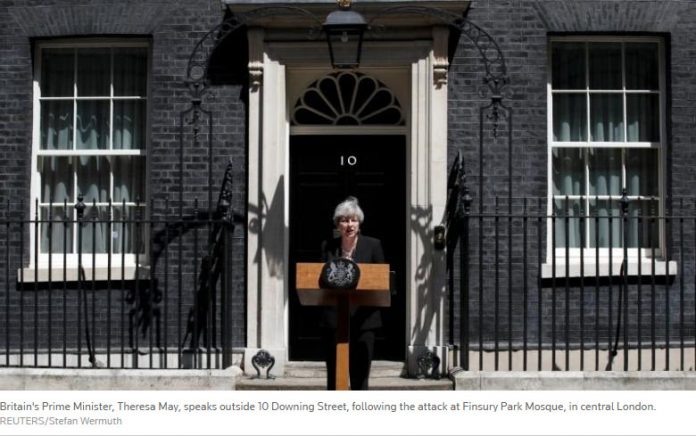 Today, June 19, 2017, Prime Minister Theresa May was again addressing the UK citizens to make statements of dismay and shock for the van attack at a mosque.  Her words fall short, as the attack was obviously inspired by the recent vehicular attacks from France to the UK.  Her response to remedy was (as shown below) “extra police resources would be deployed”.  At some point deploying “more” becomes a militia state.  How many need to be deployed before it finally gets recognized that we are at war?  AND… the enemy is named?

Europe’s open borders and open welfare for those flooding in without concerns for it’s own citizens has created much of this issue needing to be addressed!  Time to return to citizens first and recognize where the problem started.

UK PM May says attack on Muslims near mosque is ‘sickening’

British Prime Minister Theresa May said hatred and evil would never succeed after a van plowed into worshippers near a London mosque in a deliberate attack on Muslims as they left prayers at mosques in north London on Monday.

“This morning, our country woke to news of another terrorist attack on the streets of our capital city: the second this month and every bit as sickening as those which have come before,” she said outside her Downing Street office.

“It was an attack that once again targeted the ordinary and the innocent going about their daily lives, this time British Muslims as they left a mosque after prayers.”

She said extra police resources would be deployed to provide reassurance and said Britain had been far too tolerant of all forms of extremism in the past.