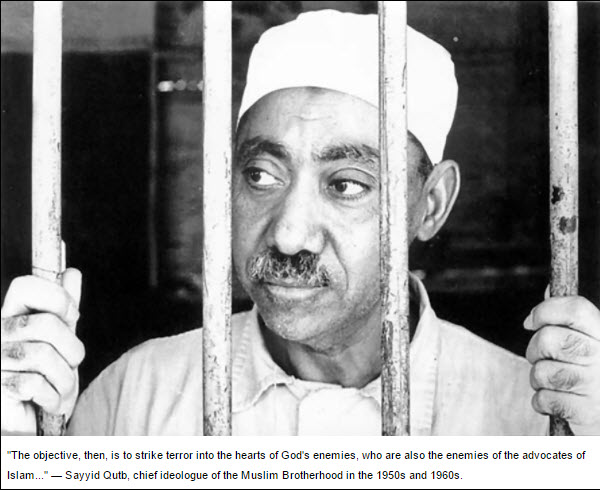 The Trump administration is considering designating the Muslim Brotherhood (MB) a foreign terrorist organization, and Human Rights Watch is outraged.

“Designating the Muslim Brotherhood a ‘foreign terrorist organization’ would wrongly equate it with violent extremist groups like Al-Qaeda and the Islamic State and make their otherwise lawful activities illegal,” said Human Rights Watch. The press release went on to repeat the old claim that “…the Muslim Brotherhood in Egypt officially renounced violence in the 1970s and sought to promote its ideas through social and political activities”.

Adding its voice to the Muslim Brotherhood’s apologists, the New York Times wrote:

“A political and social organization with millions of followers, the Brotherhood officially renounced violence decades ago and won elections in Egypt after the fall of President Hosni Mubarak in 2011. Affiliated groups have joined the political systems in places like Tunisia and Turkey, and President Barack Obama long resisted pressure to declare it a terrorist organization.”

For decades, the Muslim Brotherhood has pushed a specific public narrative, intended exclusively for Western consumption. Just how extremely effective the MB has been was demonstrated in 2011, when then Director of National Intelligence James Clapper, unbelievably, claimed that the MB was “… largely secular… has eschewed violence and has decried Al Qaeda as a perversion of Islam…They have pursued social ends, a betterment of the political order in Egypt…there is no overarching agenda, particularly in pursuit of violence”.

Nothing could be farther from the truth.

The founder of the Muslim Brotherhood, Hassan Al-Banna made jihadist violence a focal point of his movement. He wrote, “Death is art” and “Fighting the unbelievers involves all possible efforts that are necessary to dismantle the power of the enemies of Islam.” The MB inducts members into its deliberatively secretive and opaque network with the pledge that “Jihad is our way” and “Dying in the way of Allah is our highest hope.”

It is, in fact, difficult to overstate the importance of the MB in promoting and spreading jihad in the 20th century and onwards[1]. As the UK government’s expert review of the MB, published in December 2015, concluded:

The UK review goes on to say:

The indictment could not be more damning.

The New York Times itself featured a lengthy article called “The Philosopher of Islamic Terror” about Sayyid Qutb in its magazine in March 2003, stating that he was “…the intellectual hero of every one of the groups that eventually went into Al Qaeda, their Karl Marx… their guide”. Most of the terrorists who later founded al Qaeda were rooted in the Muslim Brotherhood. Osama bin Laden was apparently recruited as a young man to the MB, whereas Ayman al-Zawahiri joined the MB at the age of 14 and went on to found the Egyptian Islamic Jihad, “an organization that holds many of the same beliefs as the MB but simply refuses to renounce violence inside Egypt”, according to The Foundation for Defense of Democracies (FDD). It subsequently merged with bin Laden’s organization. The lead hijacker of 9/11, Mohammed Atta, was also a member of the MB. The list goes on.

In January 2015, the Muslim Brotherhood in Egypt released an official statement calling on its supporters to “prepare” for jihad:

“It is incumbent upon everyone to be aware that we are in the process of a new phase, where we summon what is latent in our strength, where we recall the meanings of jihad and prepare ourselves, our wives, our sons, our daughters, and whoever marched on our path to a long, uncompromising jihad, and during this stage we ask for martyrdom.”

“Imam al-Bana prepared the jihad brigades that he sent to Palestine to kill the Zionist usurpers and the second [Supreme] Guide Hassan al-Hudaybi reconstructed the ‘secret apparatus’ to bleed the British occupiers.”

After the official statement was released, Eric Trager, a fellow at the Washington Institute for Near East Policy (WINEP), stated:

“Muslim Brothers have been committing violent acts for a very long time. Under [Egypt’s former president, Mohamed] Morsi, Muslim Brothers tortured protesters outside the presidential palace. After Morsi’s ouster, they have frequently attacked security forces and state property… But until now, the official line from the Brotherhood was to support this implicitly by justifying its causes, without justifying the acts themselves. So the Brotherhood’s open call to jihad doesn’t necessarily mean a tactical shift, but a rhetorical one.”

“It [the call for jihad] invokes the Muslim Brotherhood’s terrorist past, specifically mentioning the ‘special apparatus’ that waged terror in the 1940s and 1950s until the Nasser government cracked down on the group, as well as the troops sent by founder Hassan al-Banna to fight against Israel in 1948. It concludes saying that the Brotherhood has entered a new stage, warns of a long jihad ahead, and to prepare for martyrdom… What remains to be seen is how this announcement will be received inside the Beltway, where the vast majority of the ‘experts’ have repeatedly said that the Brotherhood had abandoned its terrorist past, which it is now clearly reviving, and had renounced violence,”

There is nothing peaceful, lawful or democratic about the Muslim Brotherhood. It believes today what it has always believed and openly stated: that a caliphate, where sharia law will rule, must be established through jihad. Refusing to designate the Muslim Brotherhood a foreign terrorist organization would be a grave mistake, playing straight into the strategy of the Brotherhood and, once more, revealing to the world the extreme gullibility of the West and its boundless willingness to believe anything the Muslim Brotherhood throws its way.