According to the 2010 census, Flint has a population of 102,434, making it the seventh largest city in Michigan.  Not a big city, probably more a mid to small city in comparisons to Los Angeles, Chicago, etc.  So, why Flint’s Bishop International Airport?   Here’s a personal commentary as this is an airport that is well known to this writer/commenter.  Two things immediately jump out: 1) It is located right at the cross roads of two major freeways (I-75 N/S and I-69 E/W), and 2.) Airports today post NO PARKING signs outside the baggage pickup/passenger arrival lanes in most all airports, Flint’s Bishop International also had those signs.  BUT, Flint’s airport security never enforced it.   So, why are those 2 things significant?  Here’s my theory on this:  Flint International Airport was a specific target.  The Muslim attacker parked in front, carried out his attack, and thought he would escape to his car and drive onto one of the freeways to make his escape.   BUT, he didn’t figure in the people that jumped on him to stop him for attacking more people.  AND, it was fortunate that he only had a knife.  Not that this was good news, but good news from the perspective that there were not mass injuries or casualties.  Pray for the officer injured and heroically did all he could to stop this Jihadi terrorist from hurting others!

This is not stopping any time soon as many of our followers realize.  If you scan the local news sources, you will see other stories that don’t make it to the MSM sources.  Stories that may NOT have ended in someone being hurt or killed.  But, very related to the Islamic threats. 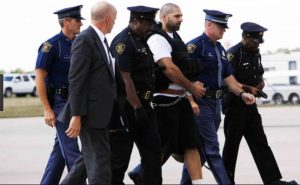 The stabbing of a police officer at a Michigan airport Wednesday by a Canadian citizen who yelled “Allahu Akbar” and referenced people being killed in Syria, Iraq and Afghanistan is being investigated by the FBI as an act of terrorism, officials said.

FBI Special Agent in Charge David P. Gelios said at a news conference Amor Ftouhi, a 49-year-old Canadian citizen, entered Bishop International Airport in Flint around 9:45 a.m. and went to a restroom before dropping both of his bags, coming out with a knife and yelling “Allahu Akbar,” the Arabic phrase for “God is great,” before stabbing Officer Jeff Neville in the neck.

Ftouhi said something similar to “you have killed people in Syria, Iraq, and Afghanistan, and we are all going to die” as he was being arrested, according to Gelios. He also used a 12-inch knife with an 8-inch serrated blade, he added.

Timothy Wiley, FBI public affairs specialist, holds a photo Amor Ftouhi after a news conference in Detroit, Thursday, June 22, 2017. Amor Ftouhi, a Canadian man, shouted in Arabic before stabbing a police officer in the neck at the Bishop International Airport in Flint, Mich., on Wednesday, and referenced people being killed overseas during the attack that’s now being investigated as an act of terrorism, federal officials said. (AP Photo/Paul Sancya)  (Copyright 2017 The Associated Press. All rights reserved.)

The Canadian citizen was motivated to come to the airport and conduct this act of violence out of a “hatred of the United States,” according to Gelios. He legally entered the U.S. at Lake Champlain in New York on June 16, and then made his way to Flint, according to Gelios.

Police in Canada were searching a Montreal apartment late Wednesday. Montreal police spokesman Benoit Boiselle told the Associated Press officers with their department were assisting the Royal Canadian Mounted Police in the search on behalf of an FBI request.

A number of police stood guard outside the apartment building in the east end of Montreal located in St-Michel borough. Canadian TV footage showed police escorting at least one person from the building where Ftouhi is believed to have lived.

Boiselle said three people staying at the residence had been taken in for questioning.

Luciano Piazza, the building landlord, said Ftouhi was not a difficult tenant and that he is married with children.

“I never had any problems with him,” Piazza said. “I’m really surprised. I would see him at least once a month, when he paid his rent.”

Federal prosecutors have charged Ftouhi with committing violence at an airport. The entire attack took place outside of the TSA screening area at the airport.

The FBI added in the criminal complaint that Ftouhi asked an officer who subdued him why he didn’t kill him.

The FBI said this is believed to be an isolated incident and that there was “nothing to suggest a wider plot.”

A White House official confirmed to Fox News that President Trump has been briefed on the stabbing.

“I want to assure all our law enforcement across the nation, any attack on someone who serves and protects our citizens will be investigated and prosecuted to the fullest extent of the law,” Attorney General Jeff Sessions said in a statement. “I am proud of the swift response from the FBI and our federal prosecutors and their partnership with local police and the Canadian authorities. Our prayers are with the officer and his family for a full recovery.”

Law enforcement agencies in Canada are in touch with their U.S. counterparts and are assisting in every way possible, Canadian Embassy spokesperson Christine Constantin told Fox News. Constantin said Canada condemns this “heinous and cowardly act,” and that “our thoughts and sympathies are with the officer and his loved ones.”

Ken Brown told The Flint Journal he was dropping off his daughter at the airport and saw the officer bleeding from his neck. He says he saw a man detained by police and a knife on the ground.

“The cop was on his hands and knees bleeding from his neck,” Brown said. “I said they need to get him a towel.”

Cherie Carpenter, who was awaiting a flight to Texas to see her new grandchild, tells Flint TV station WJRT she saw the attacker being led away in handcuffs. She described the man in custody as appearing “blank, just totally blank.”

Genesee County Commissioner Mark Young, a friend of Neville, called him “an honorable man” whom he worked with at the County Sheriff’s Department, according to MLive.
###