It is beyond time for President Trump to DRAIN THE SWAMP in this area.  These Jihadi represent the Civilization Jihad that has been occurring for far too long.  They wear suits, but have the same goal as those in the trenches doing the actual attacks on non-Muslims across the world.  They are very highly educated and have the Islamist’s “speak” that is difficult to unravel if you have not studied the enemy.

THIS MUST BE STOPPED! 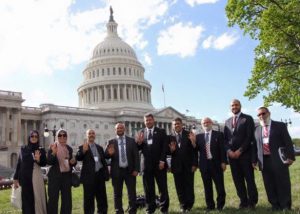 The Muslim Brotherhood is quite active in the U.S. and undeterred by the new administration.

Muslims flashing the Muslim Brotherhood sign in front of the U.S. Capitol

@Khaled_M_Hamza @sherifa78060270 @EricTrager18@jrossman12 I was hoping that liberal elites would at least support t/challenge to get political Islam out of its orbit, but no.. they foster it instead

@miskelayla @Khaled_M_Hamza @EricTrager18 @jrossman12 How on Earth can US lawmakers meet with Muslim Bro thugs specially Ayat Orabi (woman to the left) who openly calls to boycott Christians? pic.twitter.com/dIy8iajGZt

The organization held several direct meetings between the organization’s delegation from various US states and members of the US Congress and a comprehensive file of human rights violations in Egypt since the military coup of July 2013 to March 2017.

“The members of the US Congress thanked the Egyptian delegation for presenting this important file for its study and research, and the determination to stop the violations in Egypt.”

More on one of the Muslim Brothers via: 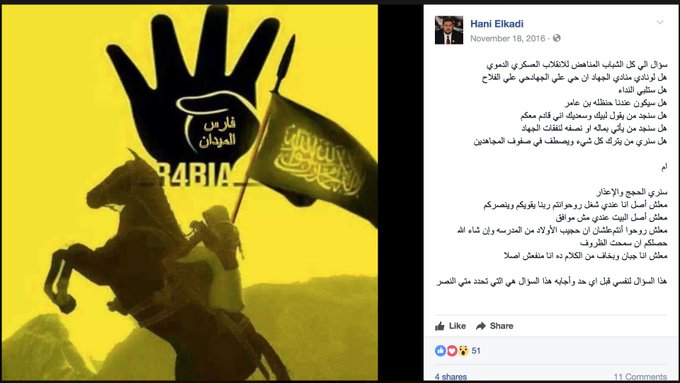 One response to the recent tweet above doesn’t bode well for New Jersey or America:

Awni Elsherbeiny
@AElsherbeiny@EricTrager18 @jrossman12 I live in Jersey, MB are all over the place here, like cockroaches.

Three Muslim Brotherhood supporters who caused a row in Egypt last year after they met with Obama administration officials and members of Congress returned to the U.S. Wednesday, according to the Facebook page of Egyptian Americans for Freedom and Justice (EAFJ).

EAFJ leaders Mahmoud El-Sharkawy, Hani Elkadi and Aber Mostafa greeted Heshmat, Sharaby and Azzam at New York’s JFK airport and posed for a picture with them displaying the Brotherhood’s four-fingered Rabaa salute which has become representative among those wanting the Brotherhood’s return to power in Egypt.

Elkadi seemed to self-identify as a Brotherhood member in a March 9 Facebook post showing an cartoon of a man holding a sign with the Brotherhood logo and the words which translate to, “I am [Muslim] Brotherhood and I’m not threatened.”