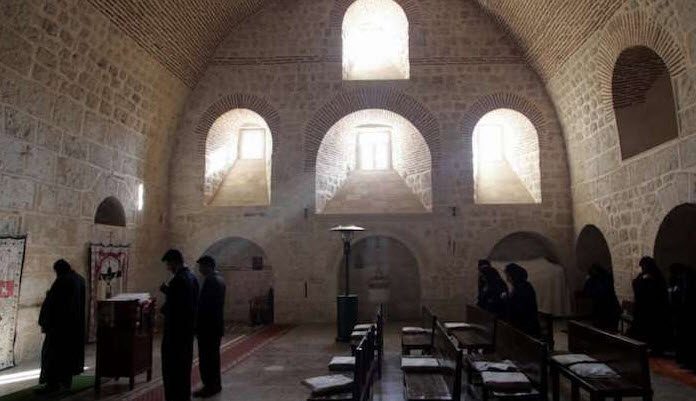 “The Turkish Directorate of Religious Affairs (Diyanet) has seized control of at least 50 Syriac churches, monasteries, and cemeteries in Mardin province, report media sources from Turkey…

” After Mardin became a Metropolitan Municipality, its villages were officially turned into neighbourhoods as per the law and attached to the provincial administration. Following the legislative amendment introduced in late 2012, the Governorate of Mardin established a liquidation committee. The Liquidation Committee started to redistribute in the city, the property of institutions whose legal entity had expired. The transfer and liquidation procedures are still ongoing.

In 2016, the Transfer, Liquidation and Redistribution Committee of Mardin Governorate transferred to primarily the Treasury as well as other relevant public institutions numerous churches, monasteries, cemeteries and other assets of the Syriac community in the districts of Mardin.

The Mor Gabriel Monastery Foundation appealed to the decision yet the liquidation committee rejected their appeal last May. The churches, monasteries and cemeteries whose ownerships were given to the Treasury were then transferred to the Diyanet.

Inquiries of the Mor Gabriel Monastery Foundation revealed that dozens of churches and monasteries had been transferred to the Treasury first and then allocated to the Diyanet. And the cemeteries have been transferred to the Metropolitan Municipality of Mardin. The maintenance of some of the churches and monasteries are currently being provided by the Mor Gabriel Monastery Foundation and they are opened to worship on certain days. Similarly, the cemeteries are still actively used by the Syriac community who visits them and performs burial procedures. The Syriacs have appealed to the Court for the cancellation of the decision.

“We started to file lawsuits and in the meantime our enquiries continued” said Kuryakos Ergün, the Chairman of Mor Gabriel Monastery Foundation. Ergün said they would appeal to the court for the cancellation of nearly 30 title deed registries.

Included in the seizure is the 1600-year-old Mor Gabriel Monastery:

Foundation of Mor Gabriel Monastery, filed a court case at the Civil Court of First Instance in Mardin against the registration of title deed records in the name of Treasury.

In the petition filed to the court it has been noted that the properties subject to the court case had been, since ancient times, under the possession and ownership of the Foundation and the significance of Mor Gabriel Monastery has been underlined; “Its history dates back to the 4th century AD. The Monastery is one of the oldest monasteries in the world which is still active and is one of the most ancient religious centers of Syriacs and the entire world with its history of more than 1600 years.

Midyat Syriac Deyrulumur Mor Gabriel Monastery Foundation had been established on the basis of the imperial order of Sultan Abdülmecid Han during the Ottoman Empire in “1267 Islamic calendar (1851/1852 Gregorian calendar) and its status was redefined, became a legal entity, on the basis of the Foundations Law of 13.06.1935 with no 2762.