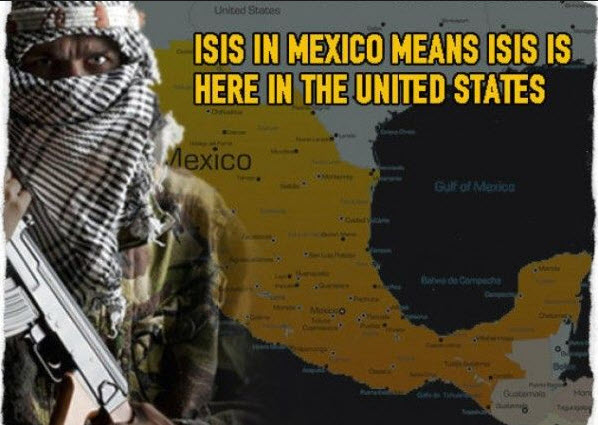 A new government audit confirms what Judicial Watch has been reporting for years, that Islamic terrorists are operating in Mexican border towns and infiltrating the United States to carry out attacks. In a report issued this month by the Texas Department of Public Safety, the agency notes that the state faces a full spectrum of threats and “due to the recent actions of lone offenders or small groups affiliated with or inspired by the Islamic State of Iraq and Syria (ISIS) and other foreign terrorist organizations, we assess that the current terrorism threat to Texas is elevated.”

Safety officials in the Lone Star State also write in the 86-page document that they are “especially concerned about the potential for terrorist infiltration across the U.S.-Mexico border, particularly as foreign terrorist fighters depart Syria and Iraq and enter global migration flows.” They also express worries about Syrian refugees that have been sent to Texas under President Obama’s settlement program because the government doesn’t have a system to properly vet them. Judicial Watch has also reported extensively on that national security crisis. Read the latest stories here and here. “We see a potential that these challenges may leave the state exposed to extremist actors who pose as authentic refugees, and who are determined to later commit violent acts,” the Texas report states.

In the same manner that ISIS deployed operatives to their targets in European capitals, the terrorist group could implement the same tactics to infiltrate operatives across the Texas-Mexico border, the new report points out. “Human smugglers, working along established Latin American routes, have long transported Syrians, Iraqis and other immigrations from countries where terrorist groups operate to our land border with Mexico,” Texas safety officials write in the report. The U.S. government calls them Special Interest Aliens (SIA) and in past few years they have come from Turkey, Iran, Afghanistan, Pakistan, Lebanon, Egypt and many other “countries of interest” in the Middle East, North Africa and South Asia where terrorist groups are active.

The southern border has become a hotbed of Islamic terrorism in recent years and Judicial Watch has exposed the national security disaster as part of an ongoing investigation into the dangerously porous region. In 2015 Judicial Watch reported that Mexican drug cartels are smuggling SIAs from countries with terrorist links into a small Texas rural town near El Paso. Sources on both sides of the border confirmed to Judicial Watch that the smugglers use remote farm roads—rather than interstates—to elude the Border Patrol and other law enforcement barriers. Once they clear the border, the SIAs are transported to stash areas in Acala, a rural crossroads located around 54 miles from El Paso on a state road – Highway 20. Then the SIAs wait for pick-up in the area’s sand hills just across Highway 20.

Also in 2015 Judicial Watch broke a story about ISIS operating a camp just a few miles from El Paso, Texas in an area known as “Anapra” situated just west of Ciudad Juárez in the Mexican state of Chihuahua. Judicial Watch’s sources include a Mexican Army field grade officer and a Mexican Federal Police Inspector who also revealed that another ISIS cell is located to the west of Ciudad Juárez, in Puerto Palomas. A year earlier Ft. Bliss, the U.S. Army post in El Paso, implemented increased security measures following a Judicial Watch report about an Islamic terrorist plot in the Mexican border city of Ciudad Juárez to attack the United States with car bombs or other vehicle borne improvised explosive devices (VBIED).