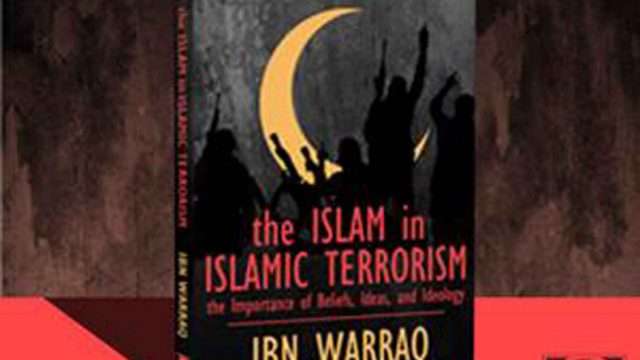 Douglas Murray, whose book The Strange Death of Europe I applauded here the other day, has called him “one of the great heroes of our time.” I fully agree. His name – or, at least, his pen name – is Ibn Warraq, and he’s the author of such important and eloquent works as Why I Am Not a Muslim (which I wrote about here eleven years ago), Why the West Is Best (which I reviewed here five years ago), and What the Koran Really Says. Born in India and educated in Britain, Warraq began criticizing Islam in print during the 1988-89 Satanic Verses controversy, when he was appalled by the failure of celebrated writers and intellectuals to defend Salman Rushdie’s freedom of speech. Warraq, who was then based in France and now lives in the U.S., has been publishing books on Islam ever since, and is one of the essential contemporary authors on the subject, courageously telling ugly truths about a religion – an ideology – that has been swathed in pretty lies.

His new book, The Islam in Islamic Terrorism: The Importance of Beliefs, Ideas, and Ideology, is (if it doesn’t sound a bit odd to put it this way) a godsend – a comprehensive answer to every one of those duplicitous politicians, lily-livered journalists, and slimy professional “experts” and “consultants” who tirelessly insist that Muslim terrorists have hijacked a peaceful faith. Some of us don’t need to be told that this “Religion of Peace” stuff is arrant nonsense; but innumerable apologists continue to absolve Islam itself of guilt for violent terror, and tens of millions of people in the West continue to buy their bull – some because they are themselves so pure of heart that they simply can’t believe any religion would actually preach violence, and others because admitting the facts would make them feel like bigots.

Many apologists insist that violence in the name of Islam is a relatively recent development; Warraq makes it crystal clear that it’s prescribed in the Koran and has been practiced from the outset. Since 9/11, apologists have attributed Islamic terrorism to such “root causes” as poverty, the Israeli-Palestinian conflict, U.S. foreign policy, Western imperialism, and the Crusades – anything but Islam itself. About this determination to formulate sophisticated answers to a question that the terrorists themselves have already answered repeatedly and definitively, Warraq observes that “[t]he centrality of religion in the Islamic world is something that Western liberals fail to understand or take seriously.” This isn’t just true; it’s one of the tragic realities of our time.

One by one, Warraq expertly shreds every one of the apologists’ fake “explanations” for terror. Imperialism? Warraq reminds us that Muslims, too, have been imperialists, destroying “thousands of churches, synagogues, and temples…in a most brutal fashion” and exterminating “whole civilizations such as the Pre-Islamic cultures of Iran (Zoroastrians) and the Assyrians.” Saudi Arabia, homeland of fifteen of the nineteen 9/11 hijackers, “was never colonized by the West” but was, rather, part of an Islamic empire – namely the Ottoman Empire, governed by Turks from Constantinople. If those Saudis were spurred by a rage at empire, why not fly a plane into the Hagia Sophia?

No, as Warraq demonstrates, there’s no way around it: Islamic terrorism is jihad. And jihad is a founding Islamic concept. The apologists, of course, have their own line on this one, too: under true Islam, they say, the word jihad denotes an inner spiritual process, and has nothing to do with violence; when terrorists use the word to describe their depredations, they’re distorting the word and the faith. Warraq, citing a wide range of scholarly sources – both Western and Islamic, some recent and some dating back to the eighth century – puts that fulsome falsehood firmly in its place: yes, jihad can be used to mean an inner struggle, but in the Koran and Hadith, and in key texts ever since, it always refers, above all, to the sacred obligation to advance Islam by means of armed action against unbelievers.

Warraq also gives us a sweeping – but succinct – lesson in the history of jihad, beginning with Muhammed’s own conquests, then moving on to ninth- through eleventh-century Baghdad, seventeenth-century Constantinople, eighteenth-century Saudi Arabia, and so on, right up to today’s Muslim Brotherhood. Of course the apologists (Barack Obama among them) would have us believe that the Muslim Brotherhood is moderate and non-violent; Warraq establishes that throughout its existence, to the contrary, the Brotherhood has preached Holy War, period. Then there’s the Nazis. Some apologists argue that Islam was just peachy until some of its leaders got chummy with Hitler and were infected by his love of violent world conquest and Jew-hatred; Warraq establishes that if Islamic higher-ups cozied up to the Nazis, it was because their totalitarian, exterminationist doctrines were already extremely similar.

Warraq also introduces us to a 1979 book that has been called “the most influential treatise on why Jihad is necessary and how it must be fought.” Written by one Brigadier S. K. Malik, The Qur’anic Concept of War won the endorsement of no less a jihad enthusiast than the late Pakistani president Zia al-Haq. A brief sample: “The Quranic military strategy…enjoins us to prepare ourselves for war to the utmost in order to strike terror into the hearts of the enemies….[The Koran] gives us a distinctive concept of total war. It wants both the nation and the individual to be at war ‘in toto,’ that is, with all their spiritual moral and physical resources.” In addition to Malik’s tome, Warraq reads (so we don’t have to) several other vile works that have also inspired the suicide-vest set – a veritable library of holy hate.

Warraq sums up his book’s point as follows: “jihad is essential for the spread of Islam, and it is a duty incumbent on all Muslims until Islam covers the whole surface of the earth.” And what’s essential for the West’s survival is for us infidels to face up to the fact that nothing is more integral to Islam than that monstrous duty. If Islamic terror is, as apologists assert, a reaction to some action by the West, that action is, as Warraq points out, nothing more or less than our failure to “accept the Koran as a blueprint for a model society.” However much the talking heads may insist otherwise, it was Islam’s explicit call for jihadist conquest, and nothing else, that motivated 9/11 and 7/7, Atocha and Nice, Bataclan and Ariana Grande. If we insist on clinging to lies about these atrocities – and thereby lose our freedom – it won’t be because Ibn Warraq hasn’t nobly and bravely shouted the truth from the rooftops.