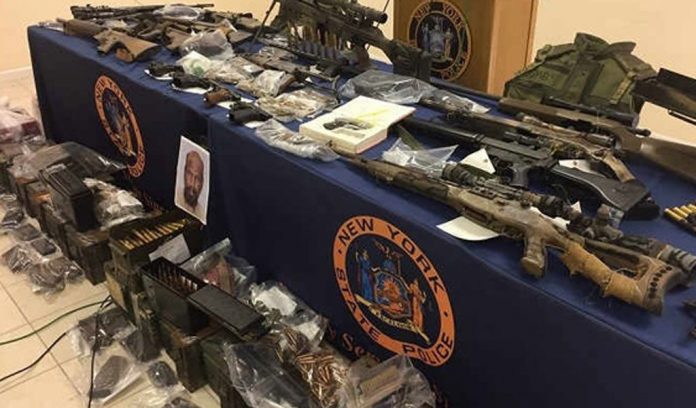 A long-time associate of a U.S.-based Islamist terrorist organization, Muslims of America (MOA), has been arrested in Johnson City, NY. Authorities discovered that he had a large cache of weapons inside a storage locker. A source inside MOA says the weapons were intended for the group’s “Islamberg” headquarters in Hancock, NY.

The suspect, 64-year old Ramadan Abdullah, was previously arrested in 1977 when he and another man tried to rob a candy store in Brooklyn and someone was murdered in the process. When police searched his home, they found enough material to build 50 bombs. In the end, the charges against Abdullah were strangely reduced (see below).

On May 31, Abdullah was arrested after trying to steal four boxes of ammunition from a local Gander Mountain store. When police questioned him about the purpose of the ammo, his answers made them suspicious, and they obtained a search warrant for a storage locker he was renting in the town of Union.

During that search, police found a large assortment of weaponry including:

Searches of other residences linked to Abdullah turned up another loaded handgun, more high-capacity ammunition feeding devices and ammunition, including .38-caliber rounds.

For a full report on Muslims of the Americas and their terror enclaves, click here

New York State Police Major Jim Barnes would not say whether Abdullah was connected to terrorist groups or any organizations, but confirmed that police believe Abdullah had made trips overseas.

“There’s no indications there was a plan in place to commit an act of violence. However, it begs the question, what was he doing with all this and what were his intentions down the road?” said New York State Police Maj. Jim Barnes.

“It’s just a tremendous blessing to be able to take all these high power weapons and high power ammunition off the streets, and who knows what kind of large scale tragedy that this investigation may have prevented later down the road,” said Johnson City Police Chief Brent Dodge.

Abdullah is currently being held in the Broome County Jail without bail.

Abdullah is a longtime associate of the U.S.-based Islamist cult Muslims of America

(MOA), which has been described as a terrorist organization in documents from the FBI and other agencies. A 2003 file says MOA is linked to terrorists in Pakistan, including Al-Qaeda affiliates.

The group’s headquarters is a 70-acre compound in Hancock, NY called “Islamberg.”  It is just a 50-minute drive from where Abdullah was arrested.

MOA is led by a radical cleric in Pakistan named Sheikh Mubarak Ali Gilani, who demands a cultish loyalty from his followers in America. Gilani indoctrinates them to follow a hate-filled extremist ideology that includes violent jihad against perceived enemies of Islam and a belief that they are fulfilling apocalyptic prophecies.

The group has claimed to have 22 “Islamic villages” across the U.S., mostly in rural areas, which have been used as guerilla training compounds. The group also has a history of committing acts of terrorism and crimes including murder, gun smuggling, narcotics trafficking and money laundering.

A 2007 FBI report warns that MOA “possesses an infrastructure capable of planning and mounting terrorist campaigns overseas and within the U.S.”  It says “members of the MOA are encouraged to travel to Pakistan to receive religious and military/terrorist training from [Sheikh] Gilani.”

Confidential sources inside MOA say that Ramadan Abdullah has been a significant member of the group since it first formed in the United States in 1980 and helped buy the land that became “Islamberg.” Additional research substantiates their information that he is close to MOA members.

They say that he is an “elder” and often visits Islamberg to spend time with older members but does not live inside the commune. He’s also provided firearms instruction for MOA, they report.

The sources say that Abdullah’s weapons were destined for the group, specifically Islamberg.

Abdullah has no apparent blood relationship with another convicted MOA member bearing the same name. In 2001, Ramadan Abdur-Rauf Abdullah fatally shot Fresno County Deputy Erik Telen with a shotgun. Court documents identified his father as a law enforcement officer in Brooklyn named Mahdi Abdullah. The murderer lived in New York and on the now-abandoned commune named “Baladullah” in California.

“We were told some bullsh** that the weapons were coming to MOA to help us defend ourselves against an upcoming biker rally. They had armor-piercing bullets coming to them. Why would they want that if they are just protecting themselves against some bikers?” said one source who learned about the explanation following a meeting that was held by MOA after Abdullah’s arrest.

Back in May 2016, a previous biker rally was held against Islamber,g the group’s Hancock, NY location.  MOA’s website claims their interfaith allies “thwart[ed] a planned attack by anti-American bikers.”

The demonstration turned out, however, to be nothing more than a few bikers and cars driving past the compound in a mostly silent and uneventful protest.

Even though the biker’s protest was small, peaceful and uneventful, MOA officials reportedly said they were upset that there wasn’t greater police protection and therefore needed more weaponry for self-protection, the source said.

Contrary to MOA’s private assertion, there is no evidence that a second biker’s rally is planned.

One source said that he was shocked over MOA’s claim that there was a lack of police protection during the first rally.

“That’s nonsense,” he said.  “There were cops everywhere during that first protest.  Sh**, MOA even had people in the trees with guns ready to shoot anybody coming on the property.  These weapons (from Abdullah) weren’t coming to MOA for any upcoming biker rally,” he said.

“And here’s the kicker,” the source continued.  “Ramadan Abdullah was there!  He was at that rally, just last year.  He was on the property.  He was MOA.  He’s still MOA.”

Law enforcement sources have told us that New York State Police knows that Abdullah was a member of MOA during its early years, but are operating with the belief that he was kicked out by Sheikh Gilani in the early 80’s because he was banned from “Islamberg” and other communes.

One source in MOA with direct knowledge of Abdullah being “kicked out” recalled it this way:

“Ramadan was one of the original founders of the group but refused to follow Sheikh Gilani’s orders to move onto Islamberg when the land was first purchased. He didn’t want to move onto the land in tents and shabby trailers in the dead of winter and pay the required fee, and he was seen as being disrespectful. So, Gilani kicked him off the land, but he very much remained a member.”

“Ramadan Abdullah is like many punished members. You can still teach skills like how to use guns or if they can use you for another reason, then you’re called upon to provide help. You just can’t live on the compounds, but you can visit.

The police would probably never know for a fact whether a member is MOA, former MOA, an affiliate of MOA, etc. unless he completely came out against them. I can’t believe they’d say he hasn’t been a part of MOA since the early days.”

Unfortunately, the district attorney’s office has not been responsive to our offers to provide additional information.

In addition, another source said:

MOA members who have been arrested and are on parole are also the ones who are most likely to get “kicked off the land” but remain in the group. Under state law, police may enter the property of any parolee without having to first obtain a search warrant. To avoid searches by the police, MOA officials do not normally allow parolees to live in their communes.

Abdullah has been arrested several times in the past, so the security-conscious MOA would obviously not want him to live on the land. Living away from the land also allows for plausible deniability.

In 1977, Abdullah and another individual were charged with the murder of Ali Shawish, in a botched attempt to rob a Brooklyn candy store.

In the night of the shooting, police went to Abdullah’s Brooklyn home at 12:15 a.m. to question him. Upon entering, they discovered enough bomb-making materials to construct 50 bombs.

The police found 14 pounds of gunpowder, three pipe casings, fuses, and chemicals like potassium cyanide, sodium nitrate and aluminum nitrate, which are used as accelerants by bomb-makers.

Abdulalh, a chemistry student at the time, said the chemicals were for a school project. He was charged with possession of explosives and criminal possession of a dangerous weapon.

Strangely, both the murder and explosive possession charges were drastically reduced to a “minor misdemeanor weapons possession” charge.

One police officer, speaking off the record, suspects Abdullah received the reduced charge because he “snitched” on someone.  But the officer still expressed shock that a murder and explosive possession charge could be reduced to a minor misdemeanor weapons charge.

The incident comes after the authors’ confidential sources in MOA reported that the group sees the election of President Trump as a fulfillment of End Times prophecies and is arming up in anticipation of jihad and raids on their camps.

MOA recently declared a vague “campaign” for Kashmir against India, a battlefield that the group has previously been engaged in. MOA has also been expressing solidarity with the Hizbul Mujahideen terrorist group in Kashmir, an organization that it has had a relationship with.

MOA obviously denies that it is an extremist organization and blasts its critics as anti-Muslim bigots. It is helped in this endeavor by the Council on American-Islamic Relations (CAIR), a group with its own extremist ties which include being identified by the U.S. Justice Department as a Muslim Brotherhood entity. CAIR and MOA are increasingly close, attacking their opponents’ character at every turn.

The arrest of Ramadan Abdullah and the discovery of his arms stockpile should be a wake up call to the danger posed by MOA and its Pakistan-based leadership.

Ryan Mauro is ClarionProject.org’s Shillman Fellow and national security analyst and an adjunct professor of counter-terrorism. He is frequently interviewed on top-tier television and radio. Martin Mawyer is president of the Christian Action Network.