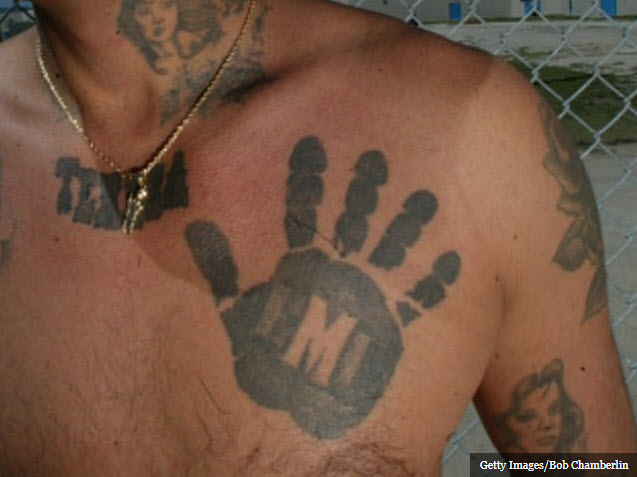 The Mexican Mafia, or “La EME,” is a U.S.-based gang made up primarily of Mexican-American street gang members. The Mexican Mafia should not be confused with illegal alien drug gangs that originate from Mexico or with the Mexican cartels that use the gang as U.S. foot soldiers. Though it originated as a prison gang, its members and operations have since spilled out into U.S. communities.

The Mexican Mafia was formed in California in 1957 for the purpose of controlling the daily criminal activities within correctional facilities by means of fear, intimidation, and violence, while providing its members protection, prestige, and providing its leadership a steady flow of income.

The Mexican Mafia is a multi-generational gang that recruits its members from traditional Mexican-American barrio street gangs. They primarily recruit the most violent, or those street gang members who have the potential to generate a generous cash flow for Mexican Mafia leadership. This cash flow is usually from the result of criminal activity such as narcotics trafficking, or from being the enforcers for debt collecting, extortion by taxing, or murder-for-hire.

Here are five reasons why the Mexican Mafia should be feared:

1. The Mexican Mafia will not hesitate to put out green lights, or hits, on U.S. law enforcement personnel or regular citizens who stand up to the gang.

They have put out green lights on U.S. investigators who were part of special task forces investigating them. These targets also included prosecutors and corrections personnel. In the late 90s in Phoenix, Arizona, a plot was uncovered in which three New Mexican Mafia Members were plotting to have the Arizona Prison Director murdered over his “get tough” policies against them, within the correctional facilities.

In San Antonio, Texas, the Texas Mexican Mafia carried out an execution of a small town police officer who had turned bad, this crooked cop had been selling drugs for the Mafia.

2. The Mexican Mafia is classified a security threat group (STG) in Arizona and California and as a Tier 1 gang in Texas, due to their propensity for violence and organizational structure within the prison system.

This classification requires special precautions to be used in dealing with its members due to the violence they have used against other inmates and corrections officers. Their criminal activity once they are released from a prison requires local and federal police as well as parole personnel to track them due to the threat potential they pose to the regular population.

3. The Mexican Mafia is used by Mexican cartels to sell drugs, firearms, engage in money laundering, and to carry out hits or assassinations against rivals on U.S. soil.

4. The are all around you and use secret “mafia loyalists” to assist with their criminal activities.

These loyalists will be family members, defense lawyers, school teachers, police, court and MVD (Motor Vehicle Division) administrative employees, as well as police and correctional officers who have been compromised.

The work that these individuals carry out are primarily with the help in facilitating communications with those mafia members locked up and those on the outside. The loyalists will also assist in illicit money transactions and transfers that benefit the mafia membership allowing them to continue with their violent activities.

5. The Mexican Mafia uses fear and intimidation to silence witnesses and victims which allow them to operate in their illicit activities.

Police investigators and prosecutors have an extremely difficult time in successfully prosecuting Mexican Mafia cases due to the reluctance of citizens speaking out against their criminal activities.