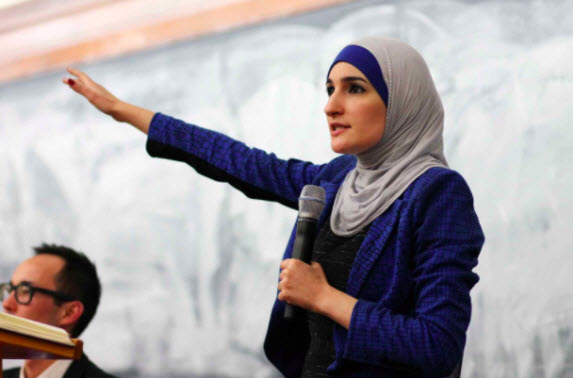 Linda Sarsour is involved in yet another scandal. The money Sarsour raised to restore a Jewish cemetery was never delivered. Was the fund raising effort merely a scam?

A Jewish cemetery in Colorado that has fallen into severe disrepair has yet to receive a check for some $100,000 from a group associated with Palestinian-American BDS activist Linda Sarsour, despite being promised the money several months ago, The Algemeiner learned on Tuesday.

Neal Price of the Golden Hill Cemetery in Lakewood, CO said he had left three unreturned voicemails for Tarek El-Messidi, the founder of non-profit Islamic education organization Celebrate Mercy, who led the high-profile effort by the Muslim community in February and March to raise money for vandalized Jewish cemeteries in the US. El-Messidi’s partner in the effort was Sarsour.

Price has been the primary caretaker of the Colorado cemetery for 35 years, and has tried doggedly to raise money to restore the area containing 800 graves of impoverished tuberculosis victims, buried there in the 19th and 20th centuries. Over the years, Price said there have been numerous false starts in his attempts to get grants for landscaping and security for the site.

As TGP previously reported, Noted Islamic-extremist Linda Sarsour, who hates western culture, loves sharia law, hates Christians, and hates men, recently managed to scam Americans out of $80,000 based on a completely fabricated hate crime hoax. On June 4th, Linda Sarsour tweeted out a picture of a Muslim woman with a bruised lip and nose asking people to donate money for loss of work and medical expenses. The police report, however, dismissed allegations of a hate crime.

As previously reported, Sarsour also called on Americans to rise up against President Trump, strongly suggesting they rage ‘Jihad’ against the current administration.

“They are relentless, they are persistent and consistent and want to see how much as a community we can endure and wanna see who our friends are and how hard we are going to fight back against this administration.”

“And I hope that when we stand up to those who oppress our communities,” Sarsour continued, “that Allah accepts from us that is a form of Jihad! That we are struggling against tyrants and rulers–not only abroad in the Middle East…but here in the Unites States of America where you have fascists and white supremacists and Islamophobes reigning in the White House.”

If you’re not familiar with this piece of work, she is a ‘Palestinian-American activist’ and key organizer of the Women’s March. She was arrested for disorderly conduct this year.

According to the Washington Free Beacon:

Sarsour, executive director of the Arab American Association of New York, received several warnings along with other demonstrators to disperse and leave the roadway outside of Trump International. The New York Police Department arrested Sarsour and other protesters after they refused to move, according to news reports and social media.

She previously accused the NYPD of “manufacturing” terrorism cases that target Muslim-Americans.

Sarsour, a co-chair of the Women’s March on Washington in January, was participating in the Day Without a Woman strike on International Women’s Day.