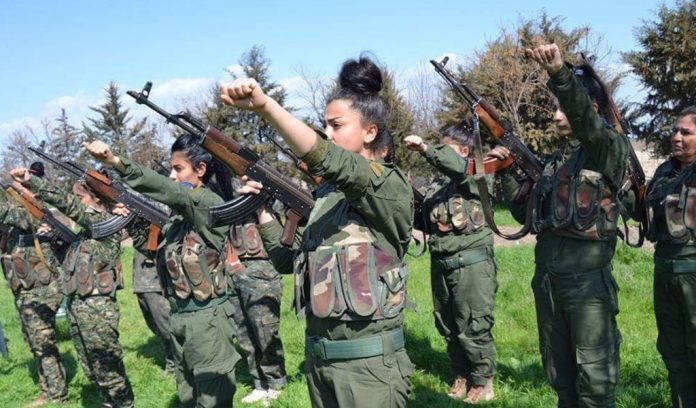 Stories about Christians in the Middle East are often about the latest barbaric persecution by radical Islamists — in an almost desensitizing, routine narrative.

Meet one group of Christian women in Syria fighting back. The Bethnahrin Women’s Protection Forces (HSNB) are part of over 2,000 Christian fighters taking on Islamic State (ISIS/ISIL).

As partners of the Kurdish-led Syrian Democratic Forces, they have been among America’s most reliable partners on the ground since their formation in mid-2015.

Similar to the better-known Kurdish forces, they are against both Syrian President Bashar al-Assad’s regime and the so-called moderate Syrian opposition.

Nisha Gewriye, commander of the women’s units, has graciously agreed to present an exclusive inside look at the women’s fighting force for Clarion Project’s readership:

Zach D. Huff, Clarion Project’s Kurdish Affairs analyst: What is your current position? Tell us about your background and why you fight.

Nisha Gewriye, HSNB commander: I am the commander of Bethnahrin Women’s Protection Forces from both the headquarters and the field. My position is to coordinate front line activities. I must be very diligent in my duty and responsibility when planning operations and assessing all potential risks beforehand.

As a woman, I am fighting against the savage Islamic State and against their inhumane treatment of women and the whole of humanity. I see it as my duty to fight against a barbarian organization that threatens the whole world.

Clarion Project: What are the most important engagements you’ve had? Where have your forces been most active, and what role do you play in taking Raqqa?

Gewriye: As positive as it is that women play an active role in the battlefield, women have yet to be accepted in society. We aim to change this status quo with the position we have. There are some obstacles to the participation of women in the military which are rooted in the mentality of the men.

We played an active role in the al-Hawl and al-Shaddadi operations, with front line positions, as well in supportive roles. In Raqqa — the capital of Islamic State — we are taking positions in the toughest places yet.

Our goal is to free Raqqa from ISIS and to completely remove them from their center of operations. We will liberate Raqqa and return it to the people.

Clarion Project: What makes your units unique? How does ISIS view you?

Gewriye: What makes our units unique is the courage of our female warriors, whose resistance and superior performance on the front scares the enemy. Moreover, our warriors have the ability to improve themselves with training and experience. We are constantly conducting training exercises to enhance combat readiness.

ISIS fears engagements with women — and to be killed by us — because according to ISIS members, if they are killed by a woman, they are not allowed to enter heaven.

So the additional advantage of women fighting against ISIS is that we psychologically undermine ISIS, meaning they are defeated sooner. It’s our strength, resistance and struggle that are frightening the enemy.

Clarion Project: Which branches of Christianity are represented among your forces?

Gewriye: We have hundreds of Christian warriors — Syriac-Chaldean-Assyrian, Protestant, Catholic, Orthodox branches and Armenians. We also have non-Christian Arab and Kurdish fighters among us.

Clarion Project: What’s it like to fight alongside mostly Muslim forces — and how do your neighbors treat you in now-liberated areas?

It’s well known that the Christian community has always been an easy target for oppression and genocide. They’ve been the most harshly affected group during conflicts.

Now the situation is different in northern Syria, where all ethnic and religious groups — Assyrians, Syriacs,Turkmen, Armenians, Arabs, Kurds — live together in friendship and peace. We still face challenges, but these problems are normal, and we try to resolve them by viewing all religions and all peoples as having a part in the community, with unity as a common denominator.

We want to ensure everyone finds a way to live together despite differences in religion, culture, and identity — that they learn to live freely and with equal rights. Everyone knows that the Christians have never used oppression or force against other people because of their religion or identity.

We prefer to live in peace, in friendship, and in equality with other people and strive to apply this idea in reality. Our real war is actually to defend this concept. We are fighting and will fight against whoever opposes the notion of living in democracy and coexistence.

We are certain that this idea of democracy, freedom and peace among diverse groups will succeed, and that’s why this is a priority for us — a continued resistance until we reach our goal.

Clarion: What support have you received from the international community? What are the most important things you need right now to win this fight?

Gewriye: We have received ammunition from the coalition. Heavy weapons are used by American and coalition forces, but we do not use these arms. To defeat ISIS, we need more superior weaponry than what they have.

When we have these heavy weapons, it is much easier to defeat the enemy — the price of victory in terms of Christian blood is much less. We are also in need of military supplies and ammunition.

Our request is that the international powers support this dignified and humanitarian war.

Clarion: How does the freedom to practice your faith while serving in the military compare with these freedoms at home? How does your religious freedom differ under Assad’s rule, versus the current Rojava administration — and what if Assad wanted to control Rojava again?

Gewriye: We see freedom of religion as very important for every human being. Maybe we do not have a chance to pray in a church, but those who wants to pray have the ability to do it — as long as it does not bother anyone else.

In the time of Bashar al-Assad, freedom of religion didn’t exist unfortunately. For example, a priest could be reported to the intelligence for his teachings. Everything was being monitored and people were frightened in this way. These tactics were done under the name of the majority religion.

In addition, the Syrian regime built mosques with public funds, but they did not build any churches. Now, with the formation of the Kurdish Democratic Self Administration, freedom of religion and freedom in general exist in every area.

Here, people are beginning to live real freedom in every sense. All peoples, beliefs and cultures live together in peace and freedom. Bashar al-Assad’s authority is no longer acceptable. There is no freedom or favor that this dictatorial regime can give to the people. It is a collapsed and reactionary regime, and we will carry out all kinds of struggle against it.

Syriac, Kurdish, Arab, Armenian, Turkmen and all peoples living in the region want to live together in democracy and peace. We want to manage our futures on our own. We do not accept dictators and authoritarianism imposed on us.

Clarion: Which Bible story or verse is most inspiring to you?

Gewriye: The light tries to shine in the dark, and the darkness could never extinguish the light (John 1:5). These words embody the teachings of Jesus Christ.

Our call for freedom is the same. We will live in peace and reach our goal by defeating this enemy. No dark power will be able to overcome this light because the rightful ones always win. Darkness cannot beat the light. We will not let our bright future be dragged into darkness. Humanity will win over this darkness.

Clarion: What do you say to your traditional, conservative Christian neighbors — and Christians around the world — about the role of women?

Gewriye: Whether we are Christians or women holding different beliefs, we must play an active role in every area, especially in places where women face oppression and where humanity is threatened.

We call on all women to unite and fight against all organizations that are working against humanity — in other words, to provide solidarity and unity, because this is a war of liberating the woman. As long as women empower themselves, they will face less oppression.

There is also the question of the diminishing and disappearing of the Christians in the Middle East. Christians have always been the target of persecution and under attacks. Under these tough conditions, Christian women are the ones that suffer most.

Outside support is critical to halt this trend. It is a shameful situation for humanity to lose this cultural and historical treasure.

We must therefore be united in solidarity and supporting each other to finally liberate the woman and to save our Christian communities.