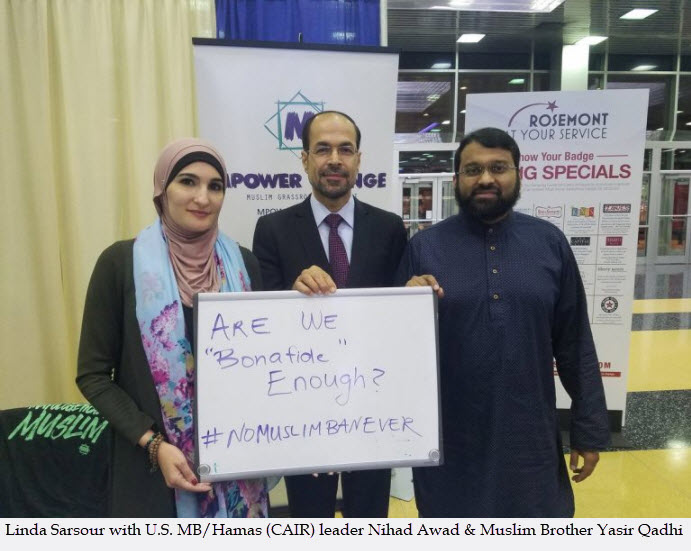 “This religion [Islam] will destroy all other religions through Islamic jihad fighters.”  Jordanian/Palestinian school book (1998)

“The word jihad is most often associated with the act of physically confronting evil and wrong-doing…if anyone dies in a Jihad they automatically go to Paradise.  The duty of muslim citizens is to be loyal to the Islamic State.”

What Islam is All About (most widely used junior high school text book in U.S. Islamic schools)

Last week, Hamas operative Linda Sarsour called for a “Jihad” against President Trump and, in case you missed the implications, the United States of America.  She made her remarks while speaking at the largest Muslim Brotherhood (MB) organization in North America – ISNA (Islamic Society of North America) – which the U.S. Department of Justice identified as a Muslim Brotherhood organization funding the terrorist group Hamas.

The MB is openly calling for jihad against the U.S. President, and they are immediately following it with an information operation stating “Jihad” is non-violent.  It is just a “struggle” we are told.

This is a blatant lie which has to be harshly and immediately put to rest.

Jihad is total warfare against unbelievers (non-Muslims).  There is no other legal definition of jihad.

Here is a quote from a high school text book used at the Islamic Center of Oakland:

“To be true Muslims, we must prepare and be ready for jihad in Allah’s way. It is the duty of the citizen and the government. The military education is glued to the faith and its meaning, and the duty to follow it.”

“Fight and slay the unbeliever wherever you find them, besiege them, and lie in wait for them in each and every ambush.”  Koran 9:5

And this from the highest legal authority in the Islamic world, Al Azhar University (Chairman):

“But jihad in the path of Allah, to make his word supreme, spread his religion, defend the honor of the Islamic nation, and respond to the aggression against Muslims all around the earth—this is jihad: when a Muslim fights an infidel without treaty to make the word of Allah Most High supreme, forcing him to fight or invading his land, this is a permissible matter according to the consensus of the jurists. Indeed, it is an obligation for all Muslims. Now if the deeds of the jihad—including fighting the infidels and breaking their spine through all possible means—are permissible according to Sharia, then it is impossible to define those acts as terrorism, which Sharia-based evidence has made illegitimate.”

There is no gray area.

The Global Islamic Movement led by the Muslim Brotherhood continues to call for the destruction of the United States and the West.

We have long past the time when we must destroy them and their Movement utterly.