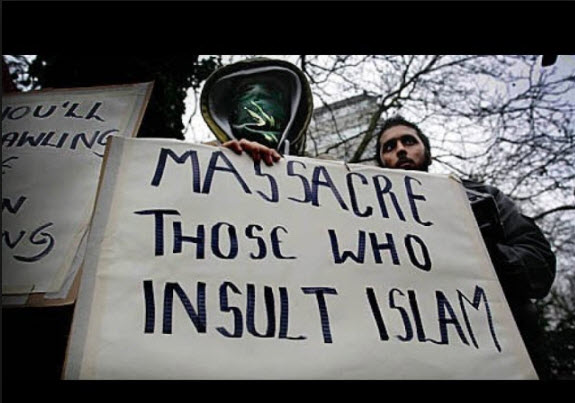 A two-minute clip from the 1989 British comedy film “Erik the Viking” demonstrates, symbolically, what is wrong with the West today – and, most particularly, Western Europe.

An earthquake triggers the slow sinking of an island kingdom. But islanders looking to King Arnulf for guidance are assured it is not sinking. Despite the fact the islanders now had to stand in waist-high water in the public square to listen to the king’s obviously incorrect assertions, they still nodded their naive agreement with him. Aboard his Viking ship, Erik beckons survivors, now clinging to the last visible land, to swim to him. But rejecting Erik’s “island-sinking-phobia,” they embrace King Arnulf’s continuing assurances – as the island finally slips beneath the sea.

Erik represents the voice of one grasping Islam’s true reality. Those unwilling to listen, however, dub him Islamophobic.

A critic of Islam, in a video posted by “Never Again Canada,” asks and answers a simple question:

“How can you tell when a civilization is in danger of collapse? … It’s when every leader of every country that makes up Western civilization no longer accepts reality … when presented with genuine danger.”

The critic then makes a statement many will claim Islamophobic but which is easily verifiable:

“In the midst of worldwide Islamic violence, war, terror, torture and rape, we are told Islam is a religion of peace, over and over again. It is a sign of total cowardice to say Islam is peaceful when it is, undoubtedly, an ideology of supremacism and war. Islam is the Quran; the Quran is Muhammad; and Muhammad was a warlord and a murderer.”

History records Muhammad was a murderer, having ordered the beheading of hundreds of Jewish males from a tribe opposing him but surrendering without a fight.

“All Western countries, with large and growing Muslim populations, find themselves, whether they like it or not, in the House of War, which is … precisely why our security services are engaged in a constant battle trying to stop the followers of the religion of peace [from] blowing us up on trains, planes and buses.”

While Western leaders give Muslims assurances we are not at war with them, they are at war with us. All non-Muslims either live in a world governed by Shariah or soon to be so governed. At least 109 verses in the Quran call for violence against non-believers to achieve the latter – most telling about a supposedly peaceful religion.

On June 10, a “March Against Sharia” was held in dozens of U.S. cities to support banning Islamic law in their states contrary to rights guaranteed by our Constitution. Shariah rejects equality of sexes, limits freedom of movement by women, allows wives to be beaten by husbands, punishes by death those leaving the religion and supports underage marriage – i.e., child rape. Yet despite religious practices accepted in the seventh century but unacceptable in the 21st, pro-Muslim rallies have outnumbered anti-Shariah protests.

Surely, one would like to believe, these pro-Shariah demonstrators were simply motivated by a sense of religious equality and an ignorance of the evils mandated by Islam’s laws.

Those proclaiming Islam peaceful seem to fall into two main groups – Muslims, who are required by the Islamic concept taqiyya to deceive non-Muslims, and non-Muslims who have not read the Quran. Accordingly, only non-Muslim scholars of Islam should be considered independent authorities.

One such expert was Thomas Jefferson. His reading of the Quran, coupled with a Muslim foreign minister’s assertion to him Islam justified unprovoked attacks against infidels, caused the future president to press for funding an American navy. Jefferson forewarned, correctly, that war with Muslim pirates was inevitable. He proved prophetic concerning Prophet Muhammad’s Islamic teachings as America’s first two wars were triggered by Muslim aggression. No one accused Jefferson of being Islamophobic.

A modern-day independent authority on Islam, Dr. Bill Warner, undertook a scientific analysis of its three core ideological sources – the Quran, the Hadiths and the Sira (Muhammad’s biography). The yardstick he applied, ironically, is the same Obama applied in a speech given at the 2015 annual Prayer Breakfast.

Obama suggested one law all faiths share – the Golden Rule – mandates we treat one another as we wish to be treated. Warner applied this in his analysis of the above sources, determining 61 percent of their contents would have to be removed as non-compliant. That content qualified as “political” Islam, dictating inferior treatment toward non-Muslims, rather than “religious” Islam, focusing purely on believers’ relationships with Allah.

“The worst error in thinking about Islam is that it is a religion … religion is the smallest part of Islam.”

Thus, the bottom line on Islam is this: It is predominantly a political ideology packaged as a religion.

Armed with this knowledge, it is unconscionable our leaders open our borders to Islam and its believers, inviting them in without truly understanding their political aspirations – aspirations impacting directly upon our freedoms.

It is well-documented over a quarter-billion lives have been lost during Islam’s 1,400-year reign as non-believers fought submission to a mostly political ideology.

How many more must die before, as did the island kingdom above, Western culture disappears under the sea of Islam, a threat it simply chose not to see coming.