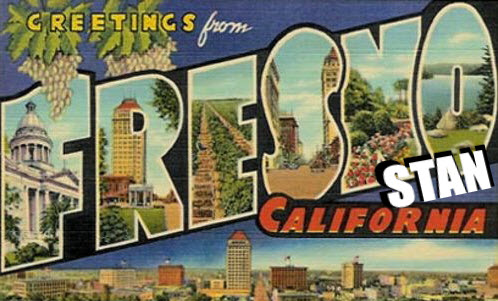 Fresno already has a growing Muslim problem. Now the Muslim refugees are invading.

via When Syria Came to Fresno: Refugees Test Limits of Outstretched Hand

FRESNO, Calif. — The police responded to a call about a loud party on East San Ramon Avenue, but it wasn’t just any party: A sheep was reportedly being slaughtered in a backyard.

“Muslim refugees were unaware that slaughtering sheep is not allowed in the city,” the police wrote afterward in their report, which also stated that those involved “were advised to clean up the blood and mess” and warned that in the future “they could be cited.”

The animal, actually a goat, was killed by a Syrian refugee who later skinned, roasted and shared it with his Syrian neighbors in the apartment complex where they all live.

Refugees are typically placed in towns and cities such as Buffalo, N.Y.; Boise, Idaho; and Fayetteville, Ark., where resettlement agencies ease their transition to life in a new country. But they are free to move about the country like anybody else, and they sometimes land in places like Fresno that are not exactly prepared for their arrival.

Since late 2016, more than 200 Syrian refugees originally settled elsewhere in the United States have made a fresh start in Fresno, the largest city in California’s agricultural belt. They have been drawn there mainly by cheap housing.

But behind the low rent is a city struggling with high poverty and unemployment, making it more difficult for the refugees to secure jobs. And Fresno has no federally funded agency to help them find work, learn basics like bus routes and understand United States culture and rules, like with the practice of animal slaughter.

Syrian children turned up unexpectedly at Ahwahnee Middle School, needing vaccinations, trauma counseling, English-language instruction and academic support as a result of interrupted schooling. “It was a shock at first,” said Jose Guzman, the principal. “We never had to teach students who speak Arabic.”

But Muslim refugees represent a polarizing issue. Although all refugees undergo extensive screening before being approved for resettlement, some Fresnans have echoed President Trump’s concerns that the vetting isn’t good enough.

As the Syrian flow intensified, Turlock, a town about 80 miles north of Fresno that has been receiving Christian minorities from Iraq and Iran for more than a decade, was identified as a site with “decent housing, jobs and a welcoming mayor,” said Karen Ferguson, executive director of the International Rescue Committee of Northern California.

About 250 Syrians, overwhelmingly Muslim, were sent there. But the agency could not immediately house all of them, stranding some families in hotels for several weeks or longer.

Last fall, a few members of Fresno’s 15,000-strong Muslim community — Pakistanis, Yemenis, Iranians and Palestinians, among others — offered to help. Soon, they were welcoming four Syrian families to apartments that they had found for them.

Word traveled fast to Turlock and elsewhere that rent in Fresno was a relative bargain — about $450 a month for a two-bedroom unit in some places — and that there were people ready to supply furniture, food, clothing and more.

In a blue-collar neighborhood once dubbed “Sin City,” more than a dozen Syrian families with up to nine members apiece are crammed into two-bedroom units in two apartment blocks on East San Ramon Avenue, where the goat roast occurred in February.

…there have been no reports of anti-Muslim violence or vandalism. And Syrians keep arriving.

More than a dozen families with nine members apiece? How could a family of nine or more possibly be vetted? How can the U.S. be allowing un-vaccinated refugees to attend public schools and claim they have been well-vetted?

The entire refugee program needs to be defunded and eliminated. Not halted. Eliminated.