Terrorist breaks into home in Halamish during Shabbat dinner, murders three Israelis and wounds a fourth.

Three Israelis were murdered on Friday evening in a stabbing a stabbing attack in the Shomron (Samaria) community of Halamish, located to the north of Ramallah. 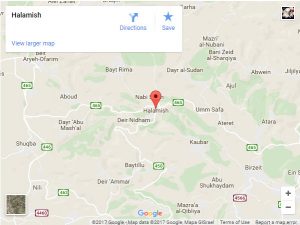 A terrorist broke into a home in the community as the residents were in the middle of their Shabbat dinner, stabbing four people. Two men, one in his 40s and one in his 60s, and a woman in her 40s, suffered critical injuries and were later pronounced dead.

A 60-year-old woman suffered moderate-to-serious injuries in the attack and was evacuated by Magen David Adom paramedics to the Shaare Zedek Hospital in Jerusalem.

The terrorist, identified as 19-year-old Omar al-Abed from the nearby Palestinian Arab village of Kaubar, was shot by a neighbor, suffering serious injuries.

IDF troops are conducting searches in and around the community and checking whether other terrorists were involved.

Magen David Adom paramedic Ehud Amiton, who was at the scene, said, “When we entered the house, we saw four people with stab wounds. Three of the wounded were unconscious, without a pulse and not breathing. We gave them medical treatment that included dressing the wounds and stopping the bleeding, and carried out advanced and prolonged resuscitation operations.”

“Another 60-year-old woman who was conscious and suffered from stab wounds to her upper body was treated at the scene and evacuated to the Shaare Zedek Hospital in moderate-to-serious condition,” he added.