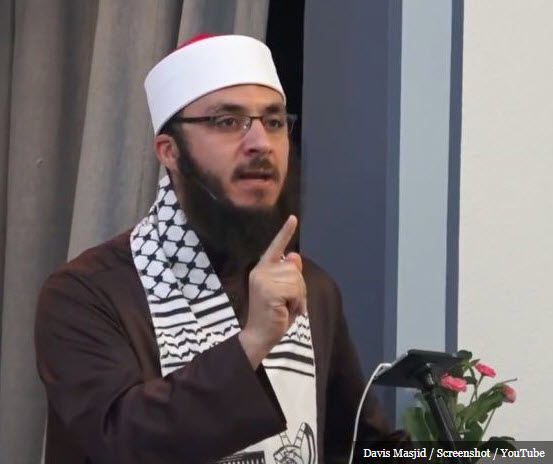 Imam Ammar Shahin of the Islamic Center of Davis in California delivered a sermon on Friday in which he quoted an antisemitic hadith and prayed for Allah to “annihilate” Jews “down to the very last one.”

The video of Shahin’s sermon was posted to the Islamic Center of Davis’s YouTube channel on Friday (Update: the video has since been removed), and translated and excerpted by the Middle East Media Research Institute (MEMRI), though portions of the sermon were delivered in English.

The topic of the sermon was the ongoing controversy at the Temple Mount in Jerusalem, where the Israeli government installed metal detectors at access points to the Al-Aqsa Mosque after a terrorist shot and killed two Druze Israeli soldiers earlier this month.

Jewish visitors to the nearby Western Wall have had to pass through metal detectors for decades, due to the security threat of terrorism. Nevertheless, the new metal detectors for Muslim worshippers have been whipped into a source of outrage among Palestinians and throughout the Muslim world.

In his sermon at the Islamic Center, Shahin quoted, in Arabic, one of the most notorious antisemitic hadiths (teachings of Muhammad) — one quoted by the Hamas charter — in which Muslims are called upon to kill the Jews to bring about Judgment Day, and in which Muhammad is said to prophesy that the Jews will try to hide behind rocks and trees, which will call out to Muslims to kill them.

The Prophet Muhammad said: ‘Judgment Day will not come until the Muslims fight the Jews, and the Jews hide behind stones and trees, and the stones and the trees say: Oh Muslim, oh servant of Allah…’ They will not say: Oh Egyptian, oh Palestinian, oh Jordanian, oh Syrian, oh Afghan, oh Pakistani. The Prophet Muhammad says that they time will come, the Last Hour will not take place until the Muslims fight the Jews. We don’t say if it is in Palestine or another place. Until they fight… When that war breaks out, they will run and hide behind every rock, and house, and wall, and trees. The house, the wall, and the tress will call upon the Muslims. It will say: Oh Muslim… It will not say: Oh Palestinian, oh Egyptian, oh Syrian, oh Afghan, oh Pakistani, oh Indian… No, it will say: Oh Muslim. Muslim. When Muslims come back… ‘Come, there is someone behind me – except for the Gharqad tree, which is the tree of the Jews. Except for a certain tree that they are growing today in Palestine, in that area, except this form of tree, which they are growing today… That’s the tree that will not speak to the Muslims.

Article 7 of the Hamas covenant reads:

The Day of Judgement will not come about until Moslems fight the Jews (killing the Jews), when the Jew will hide behind stones and trees. The stones and trees will say O Moslems, O Abdulla, there is a Jew behind me, come and kill him. Only the Gharkad tree, (evidently a certain kind of tree) would not do that because it is one of the trees of the Jews.” (related by al­Bukhari and Moslem).

It is not clear whether Shahin meant for Muslims to “annihilate” all Jews everywhere, or merely all of those responsible for the temporary closure of the Temple Mount and the installation of metal detectors in response to radical Islamic terror.

The full video of Shahin’s remarks place today’s controversy at the Temple Mount in the context of past Muslim grievances against the Crusaders for occupying the mosque and other indignities. In his remarks, his voice shaking with emotion, Shahin demanded that his audience take action to defend the mosque.

He described the fight with the “Yahood” (Jews) as a fight over faith, not over land. He said the Jews had won thus far because they were fighting for their faith. “It’s a war of faith. It’s either a belief or disbelief … They train their children to read the Torah … we do not have the parents who sits with their children and raise their awareness of what’s al Masjid Al-Aqsa.”

He praised Palestinians who face Israeli soldiers with rocks, and mocked those who merely watch events from afar. He urged congregants to pray, at the very least, for those resisting the Israelis.

At no point in his sermon did Shahin condemn the terror attack that provoked Israel to take additional security measures.

Friday is the holy day of the Islamic week, and Friday sermons are considered the most important.

Neither Shahin nor the president of the mosque returned requests for comment from Breitbart News by the time of publication.

Davis has been the site of other antisemitic incidents in the recent past, some evidently fueled by radical Islamic beliefs and affinity for the Hamas terrorist group.

In 2015, Muslims students taunted Jewish students at a student government meeting by chanting “Allahu Akbar!” at them, One of the Muslim students involved later boasted that “Hamas and Sharia law have taken over UC Davis.”