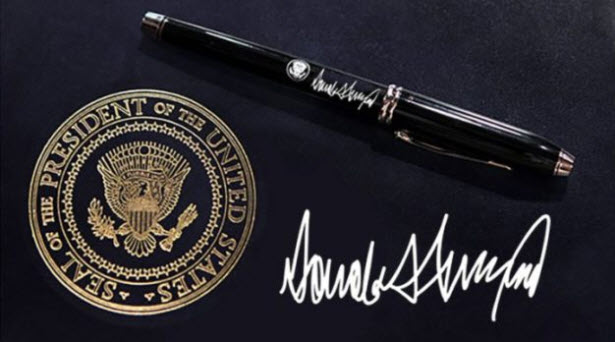 President Trump announced Wednesday morning the military will no longer allow transgender individuals to serve in “any capacity” in the military.

“After consultation with my Generals and military experts, please be advised that the United States Government will not accept or allow Transgender individuals to serve in any capacity in the U.S. Military. Our military must be focused on decisive and overwhelming victory and cannot be burdened with the tremendous medical costs and disruption that transgender in the military would entail. Thank you,” Trump said in a series of tweets that remained unfinished Wednesday morning.

Transgenderism is the “big absurdity.”

Transgenderism and homosexuality are absurdities that have lead to individuals committing atrocities upon themselves, their families and society.

The Teaching Transgender Toolkit is a detailed collection of best practices, lesson plans and resources for those who wish to facilitate trainings about transgender people, identities and experiences. The first of its kind, this book translates the authors’ decades of experience leading transgender-related trainings and educational best practices into a guide that can be used by trainers of all levels to provide accurate and effective trainings. Whether you are a novice who has never led a training before, or you are an expert trainer or an expert on transgender identities, the Teaching Transgender Toolkit has something for you!

To become a transgender you need a tool kit.

One has to “train” to become a transgender.

One cannot change their genetic sex, however there are those, like TTT’s sponsors Planned Parenthood, Out for Health a Project of Planned Parenthood and Education, Training and Research (ETR), whose sole purpose is to “teach” boys and girls to believe they are neither a boy or a girl.

Adopting “gender uncertainty” policies that permit access to vulnerable women and girls provides predators with greater access to victims. Predators can enter the private spaces of opposite-sex students without detection if they reject their birth sex or dress in opposite-sex clothing. And with the force of law protecting “transgender” students and staff, one is unlikely to report a cross-dressed person for fear of being accused of discrimination. Catch 22. Gotcha!

Dr. Reisman warned, “Remember, the U.S. Department of Education, Office for Civil Rights’ “PROTECTING CIVIL RIGHTS, ADVANCING EQUITY” reports that elementary and secondary students do mimic what they learn, becoming perpetrators. We must revisit the fallout of the obscene sexual revolution in sex ed and pornography. Was it the road to sexual liberation or the road to sexual slavery?”

The American College of Pediatricians (ACP) has released a position paper denouncing popular approaches to transgender, declaring that the current protocol is founded upon “unscientific gender ideology,” which lacks any basis in real evidence.

The physicians argue that the assumption that gender dysphoria (GD)—a psychological condition in which people experience a marked incongruence between their experienced gender and their biological sex—is innate contradicts all relevant data and is based on ideology rather than science.

Studies have shown, the authors contend, that the “perspective of an ‘innate gender identity’ arising from prenatally ‘feminized’ or ‘masculinized’ brains trapped in the wrong body is in fact an ideological belief that has no basis in rigorous science.”

“GD is a problem that resides in the mind not in the body. Children with GD do not have a disordered body—even though they feel as if they do,” the doctors note. “Likewise, although many men with GD express the belief that they are a ‘feminine essence’ trapped in a male body, this belief has no scientific basis.”

Transgenderism is a function of nurture not nature.

Whether its a parent, friend, colleague, public school teacher, professor, religion or government that is promoting transgenderism it leads the individual to question their sex when there is no scientific basis for doing so.

Today we are seeing played out what Voltaire wrote, “Those who can make you believe absurdities can make you commit atrocities.”