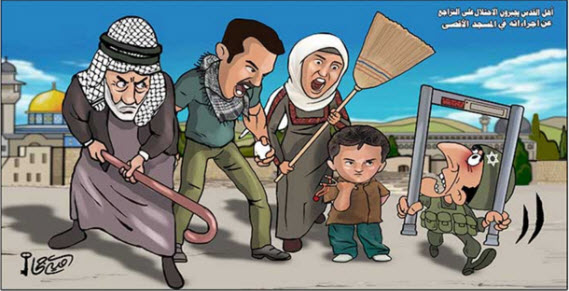 TEL AVIV – Arab media from all over the world celebrated the removal of security measures at the Temple Mount and the subsequent return of Muslim pilgrims to the holy site by publishing cartoons poking fun at Israel for capitulating and saying the Jewish state acted out of fear.

Last Tuesday, Israel removed the metal detectors in lieu of “security measures based on advanced technologies.” However, those too were removed Thursday morning and Palestinians hailed a victory by converging on the Temple Mount for afternoon prayers that day. The security measures were first installed following a July 14 terror attack in which Arab gunmen smuggled weapons onto the holy site and shot and killed two Israeli police officers.

Saudi Arabia’s Al Watan newspaper published a cartoon depicting the golden Dome of the Rock, which stands on the Temple Mount, with a hand making a “V for victory” sign adorning the top of the dome. 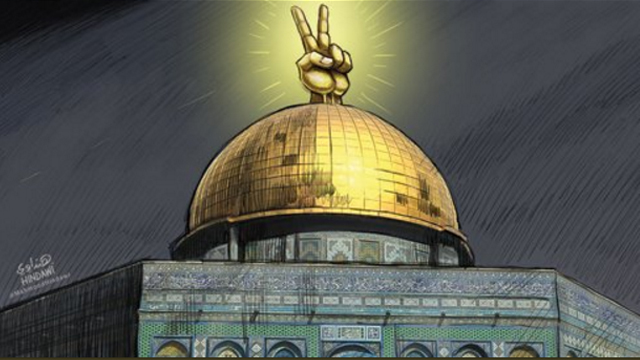 The London-based Al-Quds Al-Arabi depicted four Palestinians – an old man, a rock-wielding youth, a hijab-wearing woman with a broom and a child with a slingshot – chasing away a hook-nosed Israeli soldier carrying a metal detector. 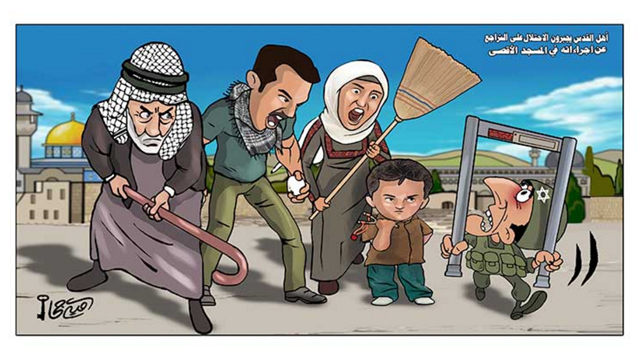 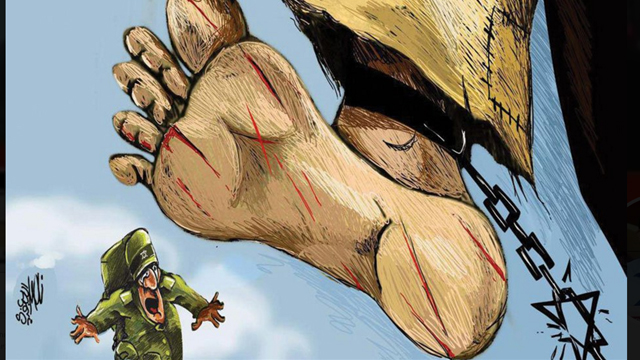 Palestinian Authority President Mahmoud Abbas’ Fatah faction posted a cartoon on its Facebook page showing Muslims at the Temple Mount cheering in victory as metal detectors run away from them in fear. The cartoon was accompanied by the text, “The Palestinian people, the nation of giants,” according to a translation by Palestinian Media Watch. Fatah published another cartoon (below) showing Palestinian Christians and Muslims celebrating together in front of their respective holy sites while a dejected Prime Minister Benjamin Netanyahu, with a security camera and boot hanging around his neck, drags away a metal detector. The irony of the cartoon is clearly lost on Fatah. After all, as well as being the holiest site in Judaism, the Temple Mount is also holy to Christians. Yet, as is also the case with Jews, Christians who visit the site are banned from praying – even under their breath – and from wearing or carrying Christian symbols such as the cross. Elsewhere on social media, memes were being shared celebrating the Muslim return to the Mount. One depicted Abbas, Saudi Arabia’s King Salman and Jordan’s King Abdullah II, dressed as militants and wielding machine guns, standing in front of the Dome of the Rock. 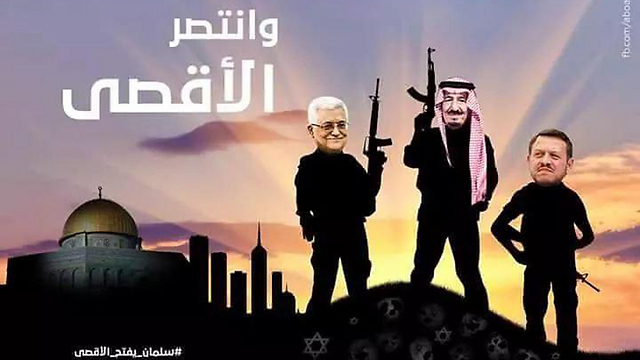 On Thursday, Breitbart Jerusalem reported that an overwhelming majority of Israelis (77%) believe that the government’s decision to remove metal detectors at the Temple Mount following rioting by Muslims was a capitulation on Israel’s part.