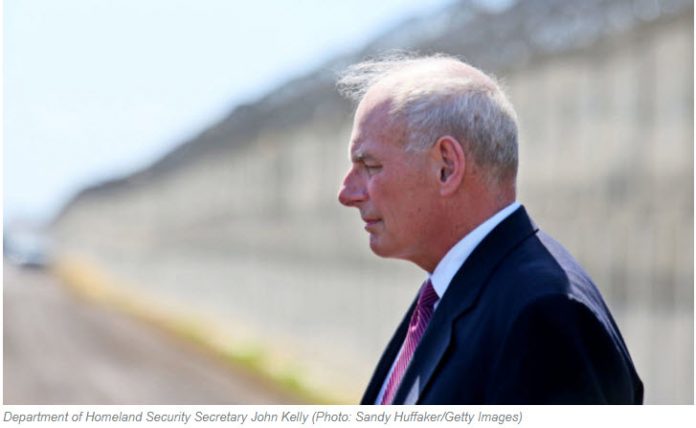 The Department of Homeland Security is continuing to use the Council on American-Islamic Relations (CAIR) as an outreach partner, despite the Justice Department identifying it as a Muslim Brotherhood entity and designating it as an unindicted co-conspirator in the largest terrorism-financing trial in American history.

CAIR’s Florida branch has published a letter from the DHS Office for Civil Rights and Civil Liberties thanking it for its years of collaboration. The author says it was written at the request of the Secretary of Homeland Security, General John Kelly. It is dated May 5 and can be seen at Pamela Geller’s website.

“The Department of Homeland Security (DHS) appreciates your years of support and partnership with the Department’s Office for Civil Rights and Civil Liberties, working on issues central to the DHS mission, including identifying civil rights and civil liberties concerns in the homeland security context,” it states.

The Justice Department designated CAIR as an unindicted co-conspirator during the trial of the Holy Land Foundation, a Muslim Brotherhood front that was financing Hamas until it was shut down. The Justice Department identified CAIR as an “entity” of the Muslim Brotherhood’s branch in America, specifically its “Palestine Committee” tasked with aiding the Hamas terrorist group.

FBI personnel were required in 2008 to begin “refraining from participating in any CAIR-sponsored events, avoiding being photographed with leaders of CAIR and not engaging with CAIR in events such as fundraisers.”

“[I]n order to stop CAIR senior leadership from exploiting any contact with the FBI, it is critical to control and limit any contact,” the report stated.

The Justice Department and FBI leadership pointed to evidence linking CAIR to Hamas and instituted the policy in 2008 to “ensure that the FBI is not supporting individuals who support extremist or terrorist ideologies.”

When the federal government engages CAIR like the DHS is doing, it gives CAIR legitimacy and a platform. Letters like these and pictures with government officials are used to fundraise, win support from Muslim-Americans, gain access to influential persons, have media segments booked and showcase its “moderate” credentials. All of this increases CAIR’s power and standing as the self-proclaimed representatives of the Muslim community.

Making matters worse is the fact that the letter was addressed to Hassan Shibly, an inflammatory activist whose extremism I exposed before he joined CAIR and was a guest speaker at Clarence High School in New York. You can read more about Shibly and CAIR-Florida’s extremism here.

Hopefully, the attribution to Secretary Kelly is just a standard formality and he didn’t actuallyrequest that this letter be written. Unfortunately, we do not know his position on designating the Muslim Brotherhood as a Foreign Terrorist Organization, so we cannot responsibly assume this is the case.

On the positive side, DHS has withdrawn grants to several Islamic groups with unsatisfactory backgrounds and activities.

Earlier, four Muslim groups rejected counter-extremism funds they were previously granted as a means of protesting President Trump, a remarkably stupid and counterproductive approach that only hurts the communities they claim to be helping.

Another positive step is that the DHS has Katharine Gorka as an official adviser to the Office of Policy. She agrees with designating the Muslim Brotherhood as a Foreign Terrorist Organization and is eager to uplift Muslims who take a staunch stand against Islamism. She is the wife of Dr. Sebastian Gorka, the deputy assistant to the president known for making TV news anchors feel like they had an anvil fall on their heads when they ask him confrontational questions.

Secretary Kelly was confirmed on January 20, so he’s had six months in office. By now, DHS policy should have been changed so it is consistent with the Justice Department’s when it comes to CAIR.

If this issue isn’t on his mind with everything that is going on, then it should be after the publication of this embarrassing letter thanking a deceptive Islamist group with a history of terror ties and extremism, including questioning whether fallen American servicemen should be honored on Memorial Day.