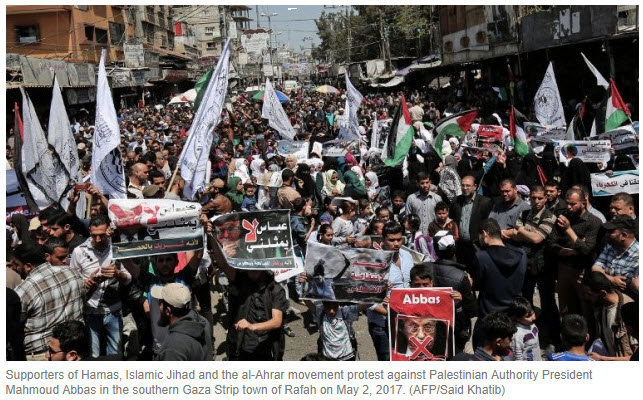 Lightning talks aimed at restoring Palestinian Authority control in Gaza and getting the PA to lift sanctions against Hamas in the Strip are underway, according to Arabic-language media sources.

The negotiations are reportedly taking place within a new framework for reconciliation initiated by PA President Mahmoud Abbas.

Earlier this year, the PA — which rules in the West Bank — stopped paying Israel to supply the Strip with electricity, and slashed salaries for government personnel in Gaza.

The feud between the two Palestinian factions — Fatah, which controls the PA, and Hamas, which rules Gaza — also brought about a severe shortage of medicine and medical equipment in the enclave, a rights watchdog said in June, describing a worsening humanitarian situation.

Abbas, who opposes what he sees as Hamas’s shadow government in Gaza, has said privately that he is tired of being Hamas’s “ATM machine” and that if Hamas wants PA money it must cede power to the PA in the Strip.

The new framework will reportedly enable the PA to restore electricity supplies and allow Gazan banks to trade in foreign currency again.

But in return, Hamas must publicly renege on its agreement with Abbas’s rival in Fatah Mohammad Dahlan, and dismantle its governing structures in Gaza, which, according to the PA, contravenes previous agreements between the group and the PA.

Hamas wrested control of Gaza from Abbas’s PA in a bloody coup in 2007. Years of reconciliation efforts have so far yielded nothing.