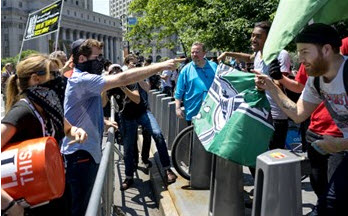 “Minnesota is no longer the state I moved to in the mid-1960s,” Bachmann told WND. “Then, we were a well-ordered society with a high-functioning population.”

Today, the largest Somali community in the United States – consisting of approximately 40,000 refugees who are predominantly Muslim, according to the U.S. Census Bureau – resides in Minnesota.

“It’s the biggest Somali community in North America – possibly in the world – outside of East Africa,” freelance photojournalist Arthur Nazaryan informed CNN. “It’s like the cultural hub of the Somali diaspora, you could say.”

“Minnesota is a super liberal state. … They have that whole history of accepting refugees from, I think, initially Vietnam, and then the Hmong … and then the Bosnian crisis,” Nazaryan pointed out. “So, they have this whole infrastructure set up already – in terms of nonprofit agencies and NGOs – where their primary purpose is resettling refugees.”

Bachmann stressed that instead of integrating with American society as contributing members, Somali refugees in Minnesota have purposely disengaged from the community – a trend that has spurred the denigration of Minnesota’s culture, which comes with numerous detrimental social consequences.

“This is a failed multicultural experiment that is killing people and destroying the future of the West,” the conservative politician insisted. “Parallel societies kill assimilation from the Third World and create havoc in American societies.”

She stressed that the refugees’ decision to not assimilate into American culture as they predominantly live in closed communities – exclusive to Somalis – is the root of the problem.

The Minnesota government’s so-called multiculturalism agenda witnessed in the public school system and other state-run entities – such as law enforcement – have taken a negative toll on the state, with a recent tragic shooting bringing the problematic policy to light.

“[Bachmann believes that] the recent shooting of Justine Damond by a Somali-refugee cop Mohamed Noor, an officer hired during a campaign for a diverse police force, demonstrates the ‘havoc’ Third World immigration can bring to the United States,” WND’s Liam Clancy informed.

Bachmann noted that Somalis’ submersion in their own culture – leading to their intolerance for American culture – was the primary reason behind the fatal shooting.

“Somali women in Minnesota are almost always covered with clothing from head to toe,” Bachmann observed. “There is very little evidence in Minnesota of Somali women adopting Western dress and Western ways. In fact, Mohammad Noor was photographed with three females from his family – all of whom were covered with traditional Somali clothing.”

The former GOP presidential candidate impressed that there are dire consequences to be faced when the government allows such a drastic cultural rift in communities.

“Was Noor acting like the Muslim religious police, maintaining strict adherence to keeping women’s bodies covered when he shot Justine?” Bachmann posed. “Was he acting from a cultural instinct?”

Evidence from the crime scene indicates that the fatal shooting at the hands of the Somali police officer was no accident.

“The facts remain unclear because the officer hasn’t cooperated with investigators, but apparently, as Damond approached the police car she called for because she heard what sounded like an assault going on, he drew his gun, fired across his partner, through a car door,” Clancy pointed out. “His bullet killed Damond.”

Not jumping to conclusions, Bachmann just wants the right questions asked during the investigation – which she hopes will not be distorted to promote the state’s multicultural bent that openly welcomes Somali refugees.

Such a mindset pervades Somali Minnesotans, with Islamic terrorism, Shariah law enforcement groups and female genital mutilation becoming more common in the state. Clancy pointed to a report by the St. Paul Pioneer Press about a Michigan doctor being charged with the genital mutilation of two Minneapolis girls this year – with a probe indicating that “multiple” other victims exist.

“[There are] ‘Shariah cops’ in Minneapolis – a group called the General Presidency of the Religious Affairs and Welfare of the Ummah that pays regular visits to Somali households to enforce Shariah law, including prohibition on the use of alcohol and restrictions on dress for women,” Clancy informed. “The group’s leader, Abdullah Rashid, is a convert to Islam who married a Somali woman and moved to Minnesota. Rashid has said he wants to turn a Muslim enclave of Minneapolis into a ‘Shariah-controlled zone,’ where Muslims are required to submit to Shariah law and non-Muslims are ‘asked to respect’ it.”

Bachmann emphasized how American tax dollars allow Somali refugees to have a higher standard of living while maintaining their anti-Western traditions.

“In Minnesota, Somali households live as they do in Somalia, only with improved living standards,” she asserted. “There is evidence of continued practice of [female genital mutilation], of domestic abuse of women,and of polygamy.”

Because of Somalis’ sheltered existence, ISIS has been able to have a presence and influence Somalis in Minnesota.

“The Islamic State claimed responsibility for a stabbing attack on a Minnesota mall in 2016, in which a 20-year-old Somali refugee injured 10 people,” Clancy recounted.

FBI Special Agent Richard Thornton, who headed the probe, said that the Somali was most likely “radicalized” by others in his Minnesota community.

“[O]ne could reasonably conclude his actions were consistent with the philosophies of violent, radical Islamic groups,” Thornton told reporters, according to WND.

Before the massive Somali refugee resettlement program began in Minnesota, such problems simply did not exist.

“As people from Third World, impoverished, dysfunctional, war-torn countries establish communities anywhere in the world – from the tiny island nation of Nauru, to Minnesota – we see that transplanting the followers of Islamic Shariah law brings with it the continual problems of Islamic Shariah,” Bachmann lamented. “There are no success stories of mass Islamic migration anywhere in the world.”

She says that assimilation – or no immigration at all – is the only solution that can dismantle the detrimental “parallel societies.”

“Immigrants must know it is a condition of entry to the U.S. to assimilate into Western society by adopting allegiance to Western law,” Bachmann concluded. “Immigrants should also be required to adopt Western dress, and be informed they must abandon the illegal aspects of following Shariah law.”

Standing for Minnesota and Trump

As President Donald Trump’s adviser on faith issues, Bachmann prayed for him in the Oval Office recently and spoke to a forum for five Republican candidates for governor about the commendable ways the commander-in-chief is handling America’s security threat posed by militants migrating from Islamic nations.

“After all of this phony, fake, Russia-collusion nonstory, the number one thing that voters in America stand with Donald Trump on, it’s the idea that they want the pause button hit on immigration from Islamic countries because of the problems that are coming into this country,” Bachmann said at the American Legion post in Waconia, Minnesota, a couple weeks ago, where she was the keynote speaker at a dinner hosted by the Carver County Conservative PAC, according to TwinCities.com.

She addressed the dangers that Muslim immigrants bring upon the community.

“This is something that we have to be cognizant of, and not be afraid of it,” Bachmann told the crowd. “That’s what I see in Minnesota: Too many people who are being afraid of being called racists, bigots, Islamophobes – I’m not afraid of it, because what we’ve got to do is talk about the truth of the problems that are going on in Minnesota. [America should] step up deportation in the country of people who are unwilling to bear allegiance to the United States, [stop immigration from Muslim countries and prevent the creation of] parallel societies within our society.”

“The next governor of Minnesota needs to understand the problems and the complications we have dealing with the issue of radical Islam,” Bachmann proclaimed. “There are very, very few who do.”

She continued to hit the problem of Islam head-on.

“Minnesota is a state that now has a reputation for terrorism,” Bachmann added, according to the Star Tribune.

The topic of the Damond shooting was brought up at the event, as well.

“[Noor was an] affirmative-action hire by the hijab-wearing mayor of Minneapolis, Betsy Hodges,” Bachmann argued. “In Minnesota, we have been marinated in political correctness so long we dare not even allow ourselves to think about cultural questions.”

She ended by pointing back to Trump’s speech in recent weeks in Warsaw, Poland, where he addressed the problem of Islamization by saying that “the West is also confronted by the powers that seek to test our will.”

The tough-on-immigration politician used this as a segue to close her speech.

“We’ve got to stop being ashamed of Western civilization,” Bachmann concluded before the crowd erupted in cheers.