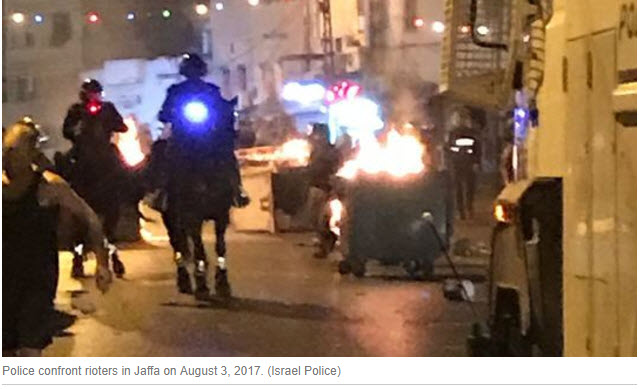 Fresh clashes erupted in Jaffa on Thursday night during a demonstration following the arrest of the brother of a man shot dead by police on Saturday.

Get The Times of Israel’s Daily Edition by email
and never miss our top stories   FREE SIGN UP!

The protest was the latest violent demonstration in the city, that has seen bouts of unrest since the Saturday shooting, which relatives say was a case of mistaken identity.

Protesters burned garbage cans, smashed shop windows and threw rocks at policemen during the unauthorized gathering, a police spokesperson said in a statement.

Police arrested two people suspected of participating in the disturbances, dispersed the rioters and regained calm in the area.

Police representatives met with community leaders in Jaffa earlier in the day in an attempt to prevent any further violent clashes and to maintain peace and quiet.

In the early hours of Saturday, police officers opened fire at two men who were suspected of being involved in a shooting at the Jaffa port. According to police, the men attempted to flee the scene of the shooting on mopeds.

Both were taken to a hospital, where one of them died of his wounds. The two men were both residents of Jaffa, a mostly Arab area in the south of Tel Aviv. 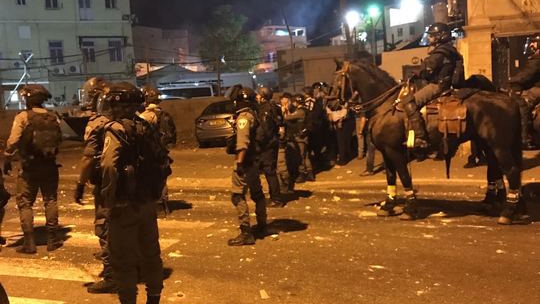 The name of the deceased has not been released.

Police had arrested the man’s brother Thursday on suspicion of assaulting several police officers who were stationed around the city to maintain order. He is also suspected of bringing additional residents with him to confront police forces, the Ynet news site reported.

A gag order was placed on the details of the earlier shooting at the port but the background is believed to be criminal.

Channel 10 reported that the suspects shot back at police during the chase. Police said an investigation into the incident has been opened.

The police officer who shot at the suspects said he did so after they refused to stop and that the shots he fired were aimed at the back wheel of the moped.