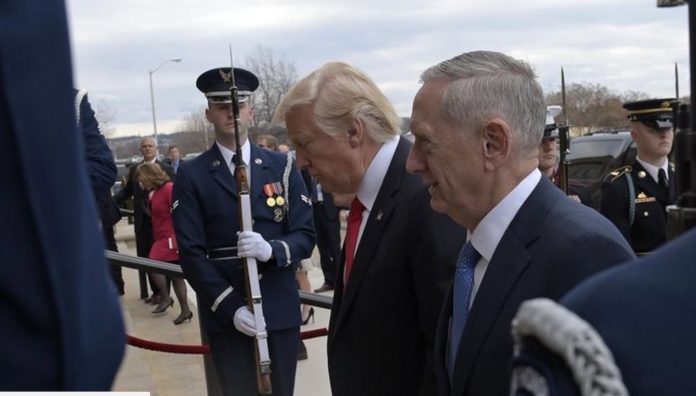 More than a dozen retired generals and admirals have signed a letter to President Trump thanking him for his announced policy to ban transgender people from the armed forces.

“We write today to express our gratitude to you for making the extremely courageous decision to reverse President Obama’s transgender social experiment,” the conservative retired flag officers wrote. “There may be an enormous amount of vitriol directed at you for making this policy correction, but please know that overturning this policy may have done more in the long-term to save the culture and war-fighting capacity of the U.S. military than perhaps any other military policy you will adopt as president.”

The letter came as the Palm Center, a research nonprofit that promotes the LGBT agenda, released a competing statement from 56 retired admirals and generals who say reimposing the ban will hurt readiness, not help it.

“The Commander in Chief has tweeted a total ban of honorably serving transgender troops,” the statement said. “This proposed ban, if implemented, would cause significant disruptions, deprive the military of mission-critical talent, and compromise the integrity of transgender troops who would be forced to live a lie, as well as non-transgender peers who would be forced to choose between reporting their comrades or disobeying policy.”

After being pressed by social conservatives, Mr. Trump announced his decision on July 26 via his favorite communications mechanism — Twitter. It caught off guard Defense Secretary James Mattis and the top brass, who issued statements saying nothing would change until they received written White House orders.

The gay rights movement and liberal media erupted in protest, and some activists are counting on Pentagon leaders to buck their commander in chief and keep the status quo.

For now, the Obama policy remains: Transgender troops may serve openly and obtain medical benefits such as gender reassignment surgeries and other treatments.

A decision on whether to allow transgender recruits is pending after Mr. Mattis pushed a July 1 deadline to the end of the year. He ordered the services to study the effects of transgender troops on readiness.

Citing various estimates that transgender medical treatments would cost $1.3 billion to $3.7 billion over 10 years, the generals and admirals wrote that “allowing transgender individuals to enlist would attract those persons who hope to have taxpayers pay for their ‘transitioning,’ including hormone replacement therapies and elective surgeries.”

“DoD guidelines require that those serving in the military be ‘medically adaptable to the military environment without the necessity of geographic area limitations,’” they wrote. “However, both hormone therapy and gender reassignment surgery result in the need for specialized medical care which will not be available in all geographic locations.”

The transgender policy adopted by Mr. Obama requires commanders to monitor all gender reassignment procedures as they consult with doctors and supervisors to approve the treatment and figure out lost duty time.

“Aside from the time lost due to the nondeployability of the person transitioning, one must also consider the time taken away from commanding officers for transgender case management,” the letter said.

The letter signatories include some active in the social conservative movement such as retired Army Lt. Gen. William G. Boykin, a storied commando who commanded Delta Force.

While on active duty in 2010, Gen. Mixon sent a letter to Stars and Stripes newspaper opposing Mr. Obama’s plans to end the military ban on open gays.

“Thank you for your focus on preserving the military effectiveness, morale and social cohesion of the United States Armed Forces,” the group wrote.

Military leaders at the Pentagon remain in a holding pattern on how and when to implement the policy change.

Pentagon spokesman Navy Capt. Jeff Davis told reporters this week that Defense Department officials were in close contact with the White House on the details of that pending directive but declined to comment whether that guidance would come as an executive order or in some other form.

“We have conversations back and forth all the time with the White House through a variety of channels,” he said, noting that Pentagon leaders fully anticipate that the White House will deliver formal guidance. “We have no reason not to believe that.”

“Orders and announcements are different things,” he said.

“I know that the goal is to work with all of the relevant departments, primarily the Department of Defense, to lawfully implement that new policy,” she said.

But there was a sign of dissent Tuesday. Speaking at a Washington think tank, Adm. Paul Zukunft, commandant of the Coast Guard, said he backs his service’s 13 self-identified transgender members. He cited the case of Lt. Taylor Miller, whose family disowned her when she went public with her sexual identity.