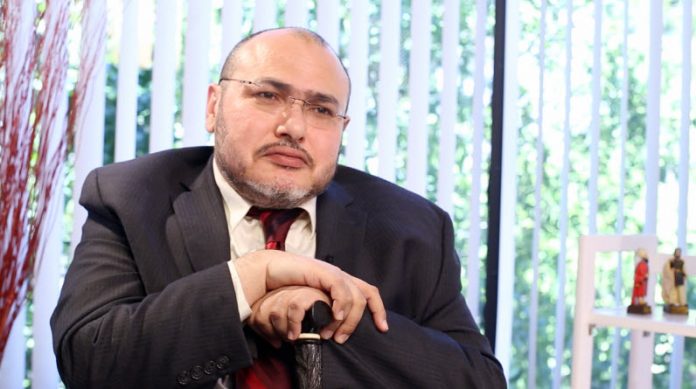 How you can stop anti-Israel incitement on campus.

When President Trump presented his budget, he defunded Title VI from $72 million to zero. But it’s up to Congress to make it happen.

Title VI centers are the organizing points for Islamist and anti-Israel activities on college campuses.  The attacks on Jewish speakers and students, the BDS resolutions and terror support begin with Title VI. So do the pro-Hamas speakers who spew hatred on campuses across America.

Instead of a wide range of views, 6 Title VI Middle Eastern studies directors have backed an academic boycott of Israel. Not only do they not promote a range of views, but they suppress pro-Israel views.

Title VI faculty play a crucial role in supporting campus hate groups from SJP to JVP to MSA. And Title VI material then finds its way from colleges into school classrooms.

All of this hatred is funded by taxpayers. But it doesn’t have to be.

Rep. Grothman, joined by Rep. Allen, Rep. Garrett and Rep. Lamborn are trying to defund Title VI and move funding over to the National Security Education Program (NSEP).  But they face an uphill battle.

Defunding Title VI would do a great deal to neutralize the ugliness and hatred on campuses.

Take the Center for Near East Studies at UCLA. The Center is busy touting a faculty member’s attack on Trump. The faculty includes Khaled M. Abou El Fadl, a leading authority on Sharia Islamic law, whom Daniel Pipes named a “stealth Islamist.” El Fadl provided an “Affidavit of Support” for top Hamas terrorist Abu Marzook. He donated to and defended the Holy Land Foundation: a Hamas front group.

In more recent articles, Abou El Fadl has defended Hamas and the Muslim Brotherhood regime in Egypt. He distinguished between “countries and movements adhering to ideologies of resistance” including “Iran, Syria, Hizbullah, Hamas” in contrast to the “moderate” appeasers of America and Israel.

“Why is Saudi Arabia so hostile to political Islam movements such as Hamas, Hizbullah, or the Muslim Brotherhood?” El Fadl asks. And the answer is that the Saudis have become “westernized and secular”.

El Fadl has been touted as a moderate because he criticizes the Wahhabis. But his criticism is not moderate, but Jihadist. He complains that Wahhabis care more about whether a Muslim woman wears a veil than “about the invasions of Iraq, Gaza, or the fate of Jerusalem.”

Should Title VI be in the business of funding centers that echo Osama bin Laden?

“Israel wants to destroy Hamas because Israel wants to continue controlling the fate of Palestinians, neutralizing their nationalism and ideological foundations, and breaking their will to resist,” El Fadl rants.

Should Title VI be in the business of funding Hamas propaganda?

But you don’t have to be an Islamist at the Center for Near East Studies to hate Israel and defend the terrorists.

Take Gabriel Piterberg, the Center’s former director. Piterberg has been at the center of a firestorm, not over his support for terrorists, but over allegations that UCLA officials had attempted to cover up accusations that he had tried to shove his tongue into the mouths of two female grad students.

Piterberg was forced to resign as director of the Center for Near East Studies, but is still on staff.

Gabriel Piterberg backs an academic boycott of Israel and associates with Students for Justice in Palestine. He appeared at a American Muslims for Palestine event. AMP has links to Hamas. He has described Islamic terrorist attacks on Israel as “a frightening piece of consciousness raising.”

Sexual harassment and contempt for the victims of terrorism are all part of the Title VI package.

Piterberg appeared at a Center for Near Eastern Studies event on a panel with Richard Falk. The Gaza and Human Rights symposium came complete with chants of “Zionism is Nazism” and F___ Israel”. Falk is a 9/11 Truther and a fan of the Ayatollah Khomeini who has supported domestic terrorism. His ugly behavior was so extreme that he was condemned by the UN Secretary General.

Falk had described the Boston Marathon bombings as “blowback” to “American global domination.” He was on good terms with an anti-Israel activist had written a book in which he wondered whether “Hitler might have been right.”

A UCLA conference organized by Piterberg included Falk and the latter had been present at a number of CNES events. That is a truly notable accomplishment for a man who had been condemned by the United States government even while it kept on funding Title VI. But that is what Title VI gets you.

UCLA’s Center for Near Eastern Studies is notorious, but it’s not unique.

“For most of human history, human beings have not thought of consent as the essential feature of morally correct sexual activity,” explained Jonathan Brown, the Alwaleed bin Talal Chair of Islamic Civilization in the School of Foreign Service at Georgetown University.

“Slave women do not have agency over their sexual access, so their owner can have sex with them,” he had claimed in the past. And, he asserted, “It’s not immoral for one human to own another human.”

The School of Foreign Service has been a recipient of Title VI funding.

John Esposito, a professor at the School of Foreign Service, testified on behalf of the Holy Land Foundation’s money men for Hamas. Esposito has defended some terrorist attacks by Hamas. He complained that, “despite HAMAS’ victory in free and democratic elections, the United States and Europe failed to give the party full recognition and support.”

Georgetown’s Center for Contemporary Arab Studies is Title VI supported. Elliot Colla, who is affiliated with the Center, signed on to a letter claiming that Hamas’ “missile assault was in direct response to Israel’s terrifying the entire population of the West Bank”. Fida Adely, of the Center, pushes BDS and has denounced Israel for raids on Hamas. At a Center event, George Mason University professor Noura Erakat complained that Israel was indiscriminately targeting Hamas people.

These are a few examples out of many. The Freedom Center, the Amcha Initiative, the Canary Mission, Stand With Us, and a great number of other groups have been battling campus anti-Semitism.

This is an opportunity to make a difference.

Title VI has become an outlet for anti-Semitism and for anti-American propaganda on campus. If we can change that, then we will send a message that the college campus is no place for terrorists and bigots.