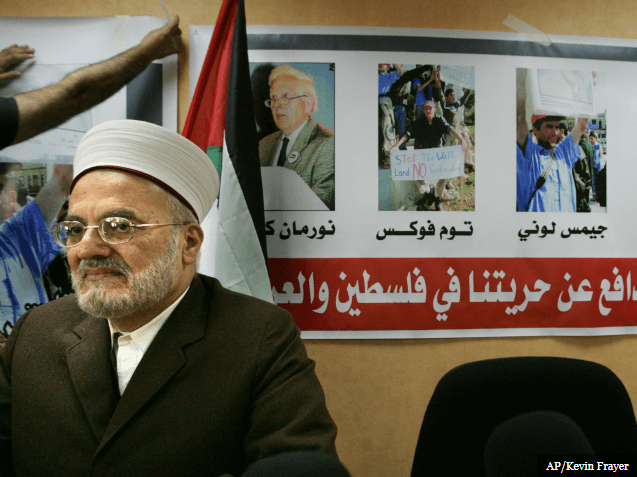 TEL AVIV — By increasing the number of Jewish visitors to the Temple Mount, Israel is trying to exact “revenge” for its “failure” to take “control” of the complex, the chief preacher at the al-Aqsa Mosque, Sheikh Ekrama Sabri, claimed.

“After the residents of Jerusalem achieved victory at the mosque, the Israeli occupation is trying to take revenge and cover for its failure with a show of force,” claimed the preacher in an interview with the Arabic television station Al Ghad.

Sabri was responding to reports about Jewish visitors to the Temple Mount yesterday to mark the fast of Tisha B’Av. According to reports, a record number of over 1,000 Jewish visitors entered the complex via the Mughrabi Bridge, the only entrance open to non-Muslims. A number of Jewish visitors were detained after trying to pray at the site, which is against the rules agreed on between Israel and the Waqf.

Contrary to Sabri’s conspiracy about “revenge,” yesterday’s Jewish tours to the Temple Mount – the holiest site in Judaism – were arranged by private groups that are not connected to the Israeli government. The fast day of Tisha B’Av mourns the destruction of the First and Second Jewish Temples, and so visits to the Mount in large numbers are connected to the fast day.

Yet, according to Sabri, “The Jews are marking what they claim as remembrance of the destruction of the Temple, or what they delude themselves was the Temple.” Sabri, who serves as director of the Supreme Muslim Council, added, “Israel’s military crimes won’t lead to peace and won’t lead them to receive any rights at the site. The Israelis installed cameras in the alleys leading to the Al Aqsa Mosque. The occupation tried to install cameras inside the mosque, but we prevented them from doing so.”

Sabri also noted that four teams of experts are currently working to determine the damage he said was caused to the religious institutions, culture, tradition and Islamic museum located at the site. According to Sabri, “These centers and libraries include treasures whose history reaches back over 1,000 years and now they are left lying in piles as a result of the damage from the occupation.”

Israel reportedly only placed the metal detectors and high-tech cameras at the entrances to the Temple Mount and not on the actual complex itself or inside any mosques. Yet the Waqf has been claiming that it needs to investigate whether Israel damaged mosques on the Mount, especially the Al Aqsa Mosque.

The Palestinian Authority has circulated wild claims that the Israelis stole ancient artifacts and documents from the site. But Sabri admitted there is no evidence any such theft took place. “The claims of the theft of these materials and their loss were not accurate and too early,” he said. “We will hold a press conference to update the public of the results of the inspection.”

Sabri’s statements contradicted a claim made yesterday by the Palestinian Foreign Ministry, alleging that documents were stolen and that various institutions inside the Al Aqsa Mosque were destroyed.