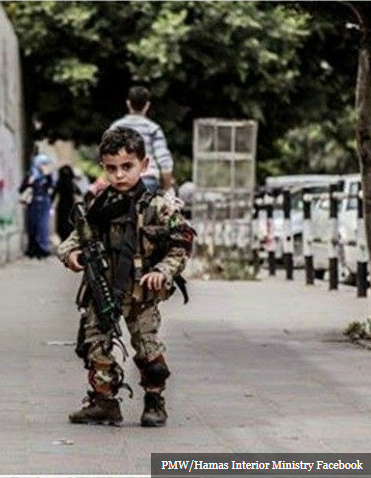 TEL AVIV – Children dressed as Islamist militants at a summer camp run by the Gaza-based Hamas terror group reenacted the recent turmoil over the Temple Mount in Jerusalem by “storming” and “liberating” the holy site by “stabbing” Israeli “police officers,” new footage shows.

The footage, which was first published on the YouTube channel of the Hamas-affiliated news site Al-Resalah and translated Tuesday by the Middle East Media Research Institute, was taken at the camp’s graduation ceremony.

The children act as Muslim worshipers engaged in clashes with children dressed as Israeli police officers in front of metal detectors and shouting, “We want to pray in the Al Aqsa Mosque!”

The “police” then aim their guns at the “worshipers” and force them to pray outside the Temple Mount complex. In reality, Palestinian leaders themselves called for a boycott of Al Aqsa and the Temple Mount complex because of the metal detectors installed there by Israel after a July 14 terror attack saw two Israeli Druze policemen killed by Arab gunmen.

Watch the video of the play below:

Several of the “worshipers” chant in unison, “We want to liberate Al Aqsa,” while some children pretend to hurl rocks at Israeli border guards and shout “Allahu Akbar.” At the same time, another Muslim “stabs” one of the “border guards” before pretending to be shot dead.

The narrator’s voice can be heard declaring, “One martyr has fallen while carrying out a stabbing operation” after “killing one of the Zionist pigs.”

A “riot” ensues with “police” throwing “tear gas” as the narrator announces “another martyr has fallen.” Children dressed up as terrorists from Hamas’ armed wing, the Izz ad-Din al-Qassam Brigades, destroy the metal detectors. The child “rioters” chant, “With our souls and our blood we will redeem you, O Al Aqsa,” repeating a slogan often used by actual rioters.

The “terrorists,” having blown up the metal detectors, then shoot rounds of gunfire in the air as they storm the Temple Mount with the announcer saying, “The mujahideen [holy warriors] are confronting the Zionist pigs and wiping them out.”

One of the “terrorists” turns to the audience and vows that Hamas will support them in “the battle for the liberation of Jerusalem and of Palestine in its entirety” and adds “this is a battle to break the chains, to shatter the shackles and to liberate the Al Aqsa Mosque from the defilement of the occupation.”

Hamas spokesman Fawzi Barhoum said the summer camps were not aimed at teaching children how to “liberate” the holy site.

“This is not true. These are just summer camps for children that take place every summer in Gaza,” he told Newsweek, “to empty them emotionally, and educate them about their reality, the causes of their suffering and how to build their future and instill a culture of love for their homeland.”

On Thursday, Israel removed the metal detectors and other new security measures after 12 days of Muslim riots in Jerusalem and the West Bank.