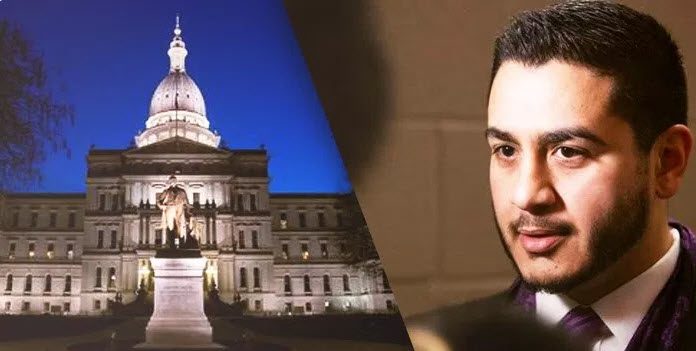 Abdul El-Sayed, potentially the nation’s first Muslim governor, sounds like the quintessential progressive politician. According to his website, the Michigan Democrat upholds “strict separation of church and state,” and vows to “defend the right of all Americans to pray as they choose.” He also opposes discrimination against the LGBTQ community and supports a pathway to citizenship for illegal immigrants.

The suspicion that El-Sayed may harbor Islamist convictions and be a Trojan horse are not unfounded, especially given the reality of what some have dubbed a “stealth jihad.”

Not surprisingly, those opposing El-Sayed’s candidacy, claiming he’s has ties to the Muslim Brotherhood and is being groomed by far-left billionaire George Soros to become the “next Barack Obama,” are being dubbed Islamophobes and conspiracy theorists. In a Vice article, Muslim journalist Beenish Ahmed attributed the allegations to a “vile political climate” and “right-wing paranoia about Sharia law.”

According to the Middle East Forum, the Muslim Brotherhood differs from other radical jihadist groups in strategy, but not in goals. Both the Brotherhood and groups like ISIS seek to destroy the West and establish Sharia, or Islamic, law. But while groups like ISIS promote a military means of conquering the West, the Brotherhood, as stated in its internal documents, seeks to penetrate and destroy Western civilization from within – “‘sabotaging’ its miserable house by their (own) hands.”

As one correspondent with the Middle East Forum put it, both the Brotherhood and militant jihadists will “shout Allahu Akbar and bomb Israel, support jihad, and support the violation of the rights of women and non-Muslims. One will do it openly and loudly while wearing his primitive Islamic dress and his untidy beard, but the other will be a Ph.D. holder from Oxford University or the Sorbonne, and he will do it cunningly and secretly while wearing his German or French suit and a tidy beard, from an air-conditioned office, all the while making deals with the Americans.”

So the ideal Brotherhood politician would be someone who secretly harbors radical Islamic convictions, but looks, acts and talks like a mainstream, major-party candidate. This candidate would not hide his Muslim identity, but instead would leverage it for political advantage, making Islam sound moderate and appealing to values like multiculturalism.

Publicly, El-Sayed espouses a very tolerant form of Islam, once remarking that he was running for public office “because of the values my Islam teaches me,” like beliefs in “equity” and “the fundamental rights of all people.”  El-Sayed also frequently talks about people of different faiths coming together, upholding his “extremely diverse” family as a model. (El-Sayed’s father, Mohamed El-Sayed, married a white woman who converted to Islam. So now, through his step-mother, El-Sayed has a grandmother who’s a Presbyterian and apparently, an uncle who’s an atheist.)

The ideal Brotherhood politician would be someone who secretly harbors radical Islamic convictions, but looks, acts and talks like a mainstream, major-party candidate.

Yet these espoused liberal convictions don’t seem very congruent with some of El-Sayed’s past and present associations, prompting suspicions that he fits the stealth Brotherhood profile. While a student at the University of Michigan, El-Sayed was “an active member” and vice-president of the Muslim Students’ Association (MSA) – a group founded mainly by members of the Muslim Brotherhood for the express purpose of spreading Wahhabist ideology – an austere form of Islam that insists on literal interpretation of the Quran and views those who disagree as enemies.

The MSA bills itself as a networking and support group for Muslim students. But according to terrorism expert Patrick Poole, the MSA “has been a virtual terror factory. Time after time after time again, we see these terrorists . . . MSA leaders, MSA presidents, MSA national presidents – who’ve been implicated, charged and convicted in terrorist plots.”

The extensive list of MSA terrorists includes Anwar al-Awlaki, an al-Queda senior recruiter, and organizer who was the first U.S. citizen to be targeted and killed in a U.S. drone strike. During his tenure at Colorado State University, al-Awlaki was president of the campus MSA. Similarly, Ramy Zamzam, convicted in Pakistan for attempting to join the Taliban and kill U.S. troops, was president of the MSA’s Washington, D.C. council. And then there’s Omar Shafik Hammami, the former president of the MSA at the University of South Alabama, who abandoned his wife and infant daughter to join the terrorist group Al-Shabaab in Somalia.

El-Sayed’s involvement with the MSA, however, is not his only association that raises red flags. El-Sayed’s father-in-law is Dr. Jakaku Tayeb, former president, and current board member of the Council on American-Islamic Relations (CAIR) Michigan.

Like the MSA, CAIR purports to be mainstream – simply a “grassroots civil rights and advocacy group.” Yet many have asserted that it’s really a terror group with board members and staff who have been accused and/or convicted of terrorist charges. In 2007, CAIR was actually named by federal prosecutors as “unindicted co-conspirators” in a criminal plot to support the terrorist group Hamas.

Of course, these are personal matters, which would seemingly have no bearing on holding public office. However, according to Manasseri, “Sharia adherents believe . . . that Sharia is the supreme law and takes precedence over any man-made law.”

El-Sayed – a Prototype of the Movement?

In a world where the desire to establish a worldwide Islamic caliphate is regularly prompting acts of terror, El-Sayed’s rise should give Americans pause. At the very least, it should prompt journalists and interested parties to vet candidates thoroughly and highlight any Islamist connections. Doing so is not Islamophobic; it’s simply prudent.