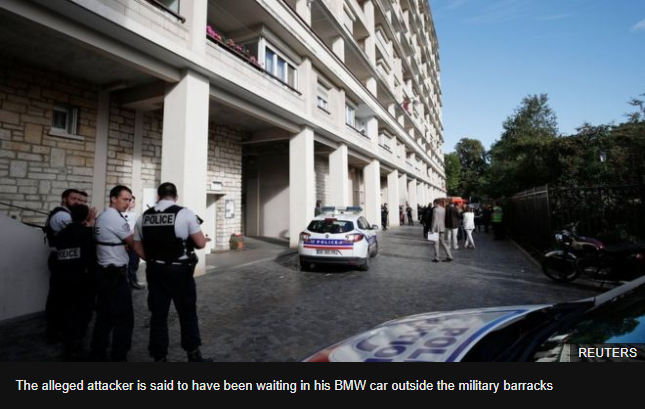 French police launched a manhunt on Wednesday after a car rammed into soldiers near their barracks outside Paris, injuring six people, two of them seriously.

Police were scrambling to track down the vehicle, which took off after the incident described by local mayor Patrick Balkany as “without a doubt a deliberate act”.

The vehicle took off after the incident, at about 6am GMT in the north-western suburb of Levallois-Perret.

“Police intervention is underway. Search underway for vehicle,” the Paris police department said in a tweet.

Mayor of Levallois-Perret Patrick Balkany has said he saw a BMW drive into the group of soldiers and has “no doubt” it was a deliberate act.

“Without any doubt, it was a deliberate act,” Balkany told BFM TV.

“It’s an odious act of aggression,” Balkany also said, adding that the car in question was a BMW.

France has been under a state of emergency since November 2015 and has seen a string of attacks on security forces who have been regularly targeted, particularly those guarding key tourist sites.

An 18-year-old with a history of psychological problems was arrested on Saturday at the Eiffel Tower after brandishing a knife and shouting “Allahu Akbar” (God is Greatest).

He told investigators he wanted to kill a soldier, sources close to the case told AFP.

In February, a man armed with a machete attacked four soldiers on patrol at Paris’s Louvre Museum, while in April another extremist shot and killed a policeman on the Champs Elysees.

In June, a 40-year-old Algeria doctorate student who had pledged allegiance to the Islamic State group attacked a policeman with a hammer outside Notre Dame cathedral.

Residents thought attack was an exercise

The Paris suburb where a vehicle rammed into soldiers is home to France’s main intelligence agency and a staging point for soldiers assigned to protect prominent sites after recent attacks.

Residents of Levallois-Perret are so accustomed to seeing security forces that resident Roseline Bailleux thought Wednesday’s attack was an exercise.

Bailleux, 67, was one of several people who said that the street where the soldiers were hit was nearly always thronged with soldiers.

She was woken in the morning by her husband, who had noticed a crush of ambulances and emergency vehicles.

“We thought it was an exercise,” she said.

She said that area was popular with parents and their children but the attack happened when they weren’t around.

She said she had been touched by several previous attacks, including the 2015 gun rampage at the Bataclan music venue in Paris – which was next door to where one of her children lived – and the 2016 Nice truck attack, which happened near where she used to live.

“I’m not going to stop walking through the park because of that. … It can happen to anyone.”

French counter-terrorism prosecutors have now opened their investigation into the attack, the Associated Press is has reported.

Defence minister: It was a cowardly act

The incident, described by police as deliberate, “does nothing to dent soldiers’ determination to work for the security of the French people,” she said in a statement.

The paper reports that the soldiers were unable to give precise witness testimonies due to the speed at which events unfolded.

The soldiers were actually hit by their own vehicle, which had in turn been rammed by the BMW in question, Le Parisien adds.

“I hope with all my heart that their attacker will be quickly arrested,” she wrote.

Was the car crash deliberate?

More from Oliver Gee, in Paris:

The question that French media is asking is: Was the car crash deliberate?

The mayor of the Levallois-Perret said it certainly was. The police have refused to comment.

Television station BFM said there are three hypotheses: A terror attack, a complete accident, or a mentally unstable driver.

Witnesses have said the car was parked in a cul-de-sac before the incident and that the driver was alone.

The driver is understood to have ploughed into the soldiers during a changing of the guards on a side street.

Police are still currently chasing the driver and on the lookout for the BMW he was driving. 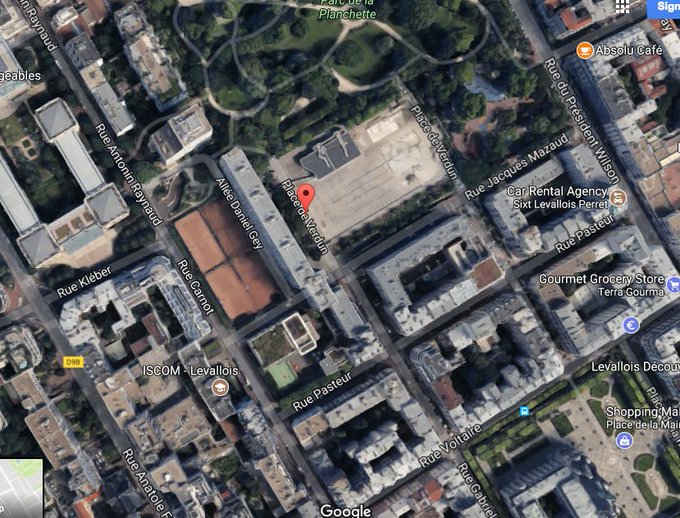 More details in from The Telegraph’s Oliver Gee, in Paris.