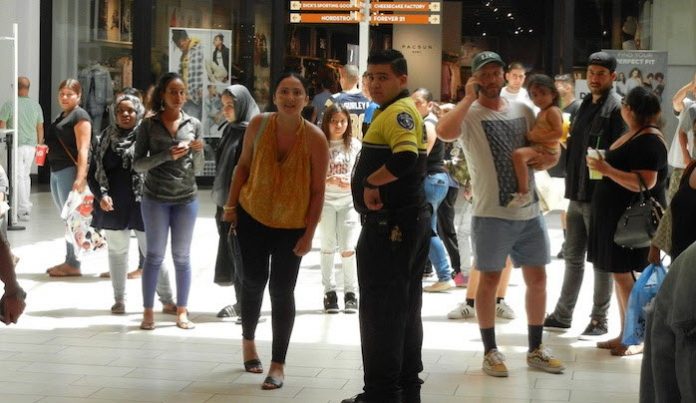 At first I thought that the two Muslims shouting at us would leave, as they have done in the past. I was wrong; it played out differently on Saturday. They were there to stay with their loud, obnoxious voices until they could get us shut down. The crowd started growing due to the commotion. Soon it numbered in the hundreds.

The cause of all of this was that the Counter Jihad Coalition (CJC) was out on a public outreach in the Cerritos Mall in Cerritos, California, educating the public on the truth of Islam. The CJC was formed several years ago to get the truth into the hands of people, since most of the mainstream media paints Islam as the religion of peace.

We have developed over 30 brochures on different aspects of Islam. All are factual and true, not our opinions. They are all based on the doctrines of Islam as set out in the Quran and the Sunnah. On a typical day, we pass out 1,500 or more of these brochures to people, who for the most part are thankful for what we are doing.

We saw an increase in Muslim pushback right after the Islamic State (ISIS) made the news, and then a huge increase in their aggressiveness after President Trump was elected. They will go to great lengths to keep the people from knowing the violence, oppression and brutality that are inherent in what they believe. And now more than ever, they are on the warpath to shut down these truths.

This past Saturday, at this venue where we have been going to for a year, Muslim anger came to a head. I called security when things started to get unruly. Soon officers from mall security, along with several Los Angeles County Sheriff Deputies, arrived to try and restore calm and sort things out.

To show you how upside down our society is, the mall manager said to me that he was going to have to shut us down early. What? Everything had been going along smoothly until the two Muslims started yelling, shouting at us and creating the hostile environment. They knew if they disturbed and disrupted, that they would win. They shouted at me that they would be there every day looking for us, and would do whatever they had to do to shut us down.

It was only a few weeks ago that the Sharia police on Facebook banned our Counter Jihad Coalition Facebook site, and took it down. To this day, I have not received an explanation from them for their action. Facebook is simply Sharia-compliant. Not only us, but many other counter-jihad groups have recently been shut down on Facebook. Our freedoms are slowly being taken away from us by the leftists who are in control of the means of communication.

In a similar vein, do you think the Sheriff Deputies escorted the obnoxious, hateful, foul-mouthed Muslims out of the mall? Not a chance! When I asked one of the Deputies if they were going to escort out the unruly Muslims, their response to me was they were waiting to hear from the mall management and what they wanted to do. So much for our law enforcement officials protecting law-abiding citizens. Every time we want to have a public outreach at this mall, we turn in an application and wait until it is approved.

After the Deputies failed to escort out the Muslims who were causing the disruption, the mall manager came over to me and said, “We are going to have to shut you down early today.” When I suggested they usher out the unruly Muslims instead, I was told that they have a right to be there and said they would not leave until we left. Did we not have a right to be there? Our dhimmi law enforcement, mall security and mall management seem to be willing to cater to Muslims anytime they are called upon to do so.

We will see what happens next week, when I turn in a new application to exercise my right of free speech. Americans better wake up fast and start pushing back on this encroachment of Sharia before our freedoms and rights are gone. Then it will be too late.