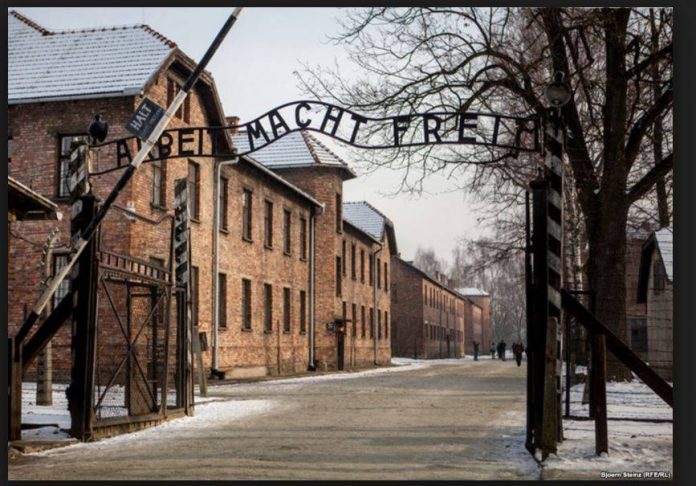 This is Auschwitz, as it appears today. Perhaps no place on the planet has ever been the scene of such egregious atrocities against humanity. How offensive this place is!

Yes, it is incomparably offensive. It is revulsive to the stomach. It drives men to puke, seventy-five years after the fact.

Auschwitz is the pinnacle of offensiveness. Not just to our Jewish brethren, whose ancestors were systematically starved, tortured, and gassed to death there, but to all the decency of humanity, to the extent there is any decency left in humanity. The Nuremberg Trials took place becasue of death camps like this… Here lies the quintessential memorial to “The Final Solution,”a standing monument to Aryan supremacy. What could be more racist? Perhaps it should be torn down so that no one has to be reminded of it, so that no one will be offended.

After all, this Auschwitz memorial might hurt someone’s feelings — to think of the memory of the prejudice and arrogance that led to such evil. How horrible that would be.

Oh.. Don’t want to tear it down? How about this compromise… Let’s dismantle it and move it to a museum! Yes! That’s the ticket! Get it out of sight so it doesn’t offend.

What? It’s too big to put in a museum, you say?

Okay, if that doesn’t work, perhaps the Germans should build a large museum over the top of it.. like a domed stadium. Maybe.. like the superdome or something… that way, no one has to look at it. It could just look like a big stadium out in the middle of the field. Passersby might think the NFL has moved to Europe. That way, no one who happens to drive by has to be “offended.” No feelings will be ruffled.

After a while, if no one sees it anymore, and no one gets “offended,” perhaps it will just all be forgotten about! Yes that’s it! Better not to be “offended” than to remember, discuss, and confront history, especially the evils of history.

And if we forget about the evils of the past, then the future becomes a blank slate! Imagine the possibilities! Anything can happen. If we can forget, we won’t be restrained by the restraints or the mistakes of the past.

Or, if it isn’t too offensive, perhaps we could heed the words of the philosopher Santayana … “Those who are ignorant of history are doomed to repeat it.”

On second thought, that quote might also be offensive, as it refers to a mass of humans who may be become “ignorant” of something. What rank arrogance by Santayana!

We simply cannot hurt someone’s feelings… Santayana cannot be allowed to refer to the masses as “ignorant,” even in a hypothetically metaphorical sense.

Better idea, when it comes to Santayana, burn all his books, and shut down all the websites that may have quoted the man. Classify his saying as “hate speech” and make the mention of his name illegal. For no one should have a legal right to warn against the “ignorance” of the masses!

Yes, destroy, hide or remove all the monuments to the past, lest they offend! Let the future become a blank slate!

Anything can happen now!

Food for thought: But better think while you can. The thought police are on the way.