On August 17, 2017 Florida Atlantic University (FAU) Professor and President of the Islamic Society of Boca Raton, FL, Bassem Alhalabi, agreed to publicly defend the Shariah Islamiyya (Islamic Law) but ran away in shame from the venue minutes before the programs starting time.

The title of the meeting was, “Interfaith Cafe: Sharia Law and U.S. Law Nothing To Fear.” Dr. Alhalabi was to defend Islamic law, making the case that we non-Muslims have nothing to fear from Shariah. 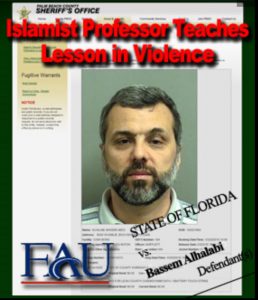 Deep down Dr. Alhalabi knows the facts are not on his side. I suspect what Dr. Alhalabi fears most are Americans who are educated on Islamic Law and use Islamic sources with consensus/Ijma to distinguish his lies from truth.

When those knowledgeable people from The United West showed up to film, Dr. Alhalabi ran out of the venue faster than you can say chop chop adios. Dr. Alhalabi left his audience and event organizers dumbfounded. I suspect this video might be the reason why.

Dr. Alhalabi remembers on May 23, 2016 he was a participant on a Muslim Student Association panel discussion on Islamophobia, at FAU, that haunts him to this day. Dr. Alhalabi made the case that chopping off the hands of thieves is good for society, as per the Shariah.

Professor ‘Chop Chop’ Alhalabi, as he’s affectionately known in South Florida, didn’t realize members of The United West caught the entire exchange on tape. Yes, this story is quite fantastic so, click on this link, watch the video here and you will be outraged if you are not a follower of Islam. I say that because on the panel was Wilfredo Ruiz, legal counsel for, The Council On American Islamic Relations CAIR Florida, who said nothing.

Except for Rabbi Barry Silver, nobody on that Islamophobia panel was outraged. There was no outrage from the followers of Islam on the panel because Dr. Bassem ‘Chop Chop’ Alhalabi said nothing that contradicted Islamic Law/Sharia.

Sadly for the Delray Beach Interfaith Cafe Community, their other speaker in the discussion, Dr. Mark Schneider, Professor Emeritus from Southern Illinois University said, “Non-Muslims have nothing to worry about, since Mohammed, and/or the Qur’an, never commanded Muslims to Kill.” Audience member, Roger Gangitano informed Dr. Schneider that Qur’an Verse 4:89 states, “Those who reject Islam seize them and slay them wherever you find them.” Dr. Schneider replied, “That is a lie” and ended that uncomfortable moment without any personal reflection or honesty.