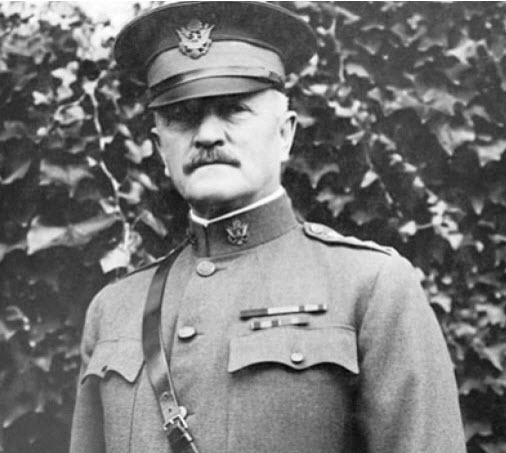 “These Juramentado attacks were materially reduced in number by a practice that the Mohamedans held in abhorrence. The bodies were publicly buried in the same grave with a dead pig. It was not pleasant to have to take such measures, but the prospect of going to hell instead of heaven sometimes deterred the would-be assassins.”

These were the words of General Pershing in his autobiography. According to the New York Times (despite having reported on it at the time) it’s a myth. The Washington Post agrees. They both cite fact checks by Politifact and Snopes. The problem with all the fact checks is… the facts.

General Pershing fell ill and died while working on his unpublished autobiography. The materials remained at the Library of Congress Manuscripts Division. Some contain his handwritten notes. They can be examined by the public.

John T. Greenwood, who assembled, edited and published the manuscript, was the former chief of the Office of Medical History, Office of the Surgeon General, US Army. He is also the author of a number of other military history books.

The book was positively reviewed as a military studies text. It was published by the University of Kentucky Press. At no point in time, until this issue came up, did anyone question its legitimacy.

“So many who achieve great things become fixed in stone as monuments. My Life before the War is a reminder that John J. Pershing was a real, living, breathing man who lived through and shaped extraordinary times. For any with an interest in either the man or the times, this book is highly recommended.” — The Journal of Military History

“What distinguishes My Life Before the World War is the author’s sense of service. It is not about Pershing the man but Pershing the public servant.” — The Historian

A fascinating read. Pershing comes across as diplomatically and politically astute—a far more nuanced officer than one gets from his standard biographers. — Timothy K. Nenninger, editor of The Way of Duty, Honor, Country: The Memoir of General Charles Pelot Summerall

A significant contribution to American military history. Pershing had a remarkable memory, and this memoir details his life from his childhood in a small Missouri town to his arrival at West Point and his military assignments across the globe. Greenwood’s scholarship is excellent. — Edward M. Coffman, author of The War to End All Wars: The American Military Experience in World War I

“To the resulting 366-page memoir, Greenwood has added a comprehensive, immaculately researched 143-page biographical appendix on officers and individuals, both American and international, whom Pershing interacted with over his lifetime. It is an invaluable contribution to the study of the US Army officer corps from 1886 to 1917. Greenwood includes no less than ten additional appendices: a lecture Pershing gave on his service in Cuba during the Spanish-American War, eight reports he made during operations against the Moros in the Philippine War, and one official investigation he conducted regarding a reverse sustained during operations in Mexico. Although these various supplements swell the volume to over seven hundred pages, they constitute a significant contribution to history in their own right. Exhaustive endnotes with Greenwood’s extremely informative annotations comprise another sixty-eight pages. The book also features a comprehensive index and very fine maps. The University Press of Kentucky and the AUSA are to be congratulated for cartography far surpassing that found in most military histories published today.” – Michigan War Studies Review

And yet, those few history deniers who have bothered to address the autobiography have begun acting as if Greenwood were a shady character passing off some dubious papers as Pershing’s own.