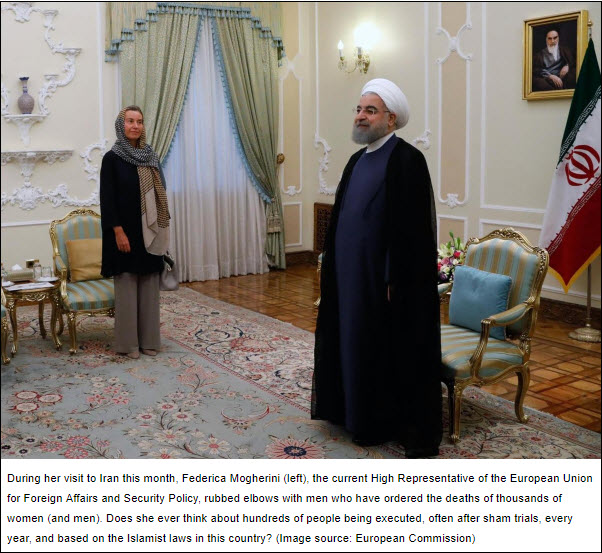 The social democrats and so-called feminists have been raising their voices for all to hear. They boast about advocating gender equality, individual rights, and advancing women’s rights. They argue that these values are universal; that every person, especially every woman, everywhere in the world, is entitled to these “inalienable” rights. Speeches are given, fundraisers are held, and an army of champions charges toward the cause.

Everyone is equal, and everyone deserves these rights. The chants, the inspirational lectures, the determination that echoes through television interviews, and is spread across the pages of magazines, all fill their followers with enthusiasm. But what is the reality?

Alongside other social democrats, Federica Mogherini, the current High Representative of the European Union for Foreign Affairs and Security Policy, recently visited the Islamist state of Iran to attend the official endorsement and inauguration of the regime’s president, Hassan Rouhani. Instead of enforcing the standards she professes — such as the strong support for women — she folded in with those around her. Others who accepted Iran’s invitation were North Koreans, members of Hezbollah, and leaders of Hamas. All three of these groups are known for cruelty, especially against women, and crimes against humanity.

The presence of such people makes the issue of despotism more complicated than it needs to be. By attending these kinds of events, social democrats such as her repeatedly endorse and give legitimacy to repressive states that implement Islamic law, Sharia. As Mogherini rubs elbows with men who have ordered the deaths of thousands of women (and men), she toes the line of their expectations. Instead of evolving their mindset, she allowed all of the women she claims to represent, to remain oppressed, as they have been for so very long.

Mogherini took the problem even a step even farther. Instead of attempting to appear as if she were working toward progressive thinking among these violent Islamist leaders, she acted as if they were friends. She appeared proud to snap selfies with the representatives of this repressive regime. The story came under the international spotlight. Some of the deputies used their selfies with Mogherini to project their legitimacy to the international community while others created self-promotional posters of themselves with Mogherini wearing the mandatory hijab. Mogherini, a social democrat Italian politician who speaks of women’s rights and was once a member of the Italian Communist Party, delightedly agreed to follow the Islamist rule of wearing a mandatory hijab. This act of compliance sends a brutal and unshakeable message. Women in these Islamist societies are controlled by laws which proclaim they must be hidden, or treated as their husband’s property. The hijab has become a symbol of this. Conversely, when Iranian leaders visit Mogherini’s country, they do not follow Italy’s rules. Instead, Italy follows the regime’s Islamist rules by offering appeasements such as covering up nude statues and not serving wine.

Mogherini — who years ago also agreed to be in controversial picture taken with the late Palestinian Authority Chairman Yasser Arafat — also played a crucial role in sealing the nuclear agreement for the Iranian regime and lifting the sanctions for those dictators. Instead of seeing these oppressors punished, she enabled them to have fewer limitations, as they still hold their own people beneath their thumbs and continue to be the cause of their suffering.

Mogherini then tweeted about her blog post, which states “It was an opportunity to talk again to Rouhani, to Foreign Minister Javad Zarif and to the Supreme Leader’s foreign policy advisor, Ali Akbar Velayati”.

Is this really an opportunity to be proud of and boast about? And what did she talk to them about?

While Mogherini is joyfully attending events with these Islamist leaders and rejoicing in having taking pictures beside them, does she ever think about the millions of women who are brutally oppressed under these Islamist regimes? Does she consider those women balled up and crying on the floor after being beaten by their husbands? Does she ever think about hundreds of people — men and women — being executed, often after sham trials, every year, and based on the Islamist laws in this country?

While she shakes the hands of these men, does think of the nine-year-old girls who are “legally” being forced into marriage with the government’s approval?

Where are all the women’s rights, liberal moral values that she and her party stand for? They were not at the celebration, and they were certainly not represented by those selfies.

Women are dehumanized, subjugated and treated as inferior on a daily basis in Islamist state of Iran as well as other Muslim states. Many people in there are struggling every day despite all the dangers they face to obtain the few rights they can. In general, a woman’s testimony in court is worth half of a man’s testimony. Women need approval from their male guardian to leave the country, and in Saudi Arabia, to leave their home. Women cannot obtain a passport without a guardian’s consent. In Iran, a man can marry any woman he desires. Men are allowed to have four wives and an unlimited number of temporary marriages (mut’a), but women can only marry a Muslim man. Honor killings continue while the regime turns a blind eye to them.

“The husband can prevent his wife from an occupation or technical profession which is incompatible with the family’s interests or the dignity of him or his wife.”

Men can initiate a unilateral divorce. Women receive only half of what men get in inheritance. A wife gets to receive only one-sixth of an inheritance if she has a son when her husband dies. If she has only a daughter, the inheritance would not automatically go to them. The deceased husband’s family — brothers, sibling and parents — would have a call on it as well. Women cannot become judges… and the list goes on.

Of course, people such as Mogherini are fully cognizant of these atrocities and the discrimination which are repeatedly reported by human rights organizations. These are even possibly the same abuses that people such as Mogherini then use to rally funds at their parties and splash in disturbing images across the media. Not one of these European leaders can plead ignorance of the acts that those men commit.

Yet, there we see people like Mogherini shaking the hands that rob women of their freedom and their voices.

The fact is that these supposed feminists not only turn a blind eye to those atrocities, but their presence at these events actively endorses and legitimizes the rule of these dictators.

People like Mogherini may be calling for admission to exclusive clubs and higher salaries for women because that equality is fair. But why, if they claim that they are champions and front-runners of women all around the world, do they contribute to, and facilitate the rule of ruthless dictators against their own people?

When the subject turns to the specific cases of millions of oppressed women around the world — such as Asia Bibi, a Christian mother on death row in Pakistan for seven years for taking a drink of water; or the 19-year-old who, this year, was raped by her cousin at gunpoint and then sentenced to death by stoning for “adultery”; or who were forced to marry their rapists; or child marriages at 12,000 a day; or women who are beaten by their husbands or who have acid thrownin their faces; or women used as suicide bombers — they become totally silent. They disregard these women’s rights.

When Mogherini smiles in her hijab in Iran, she is delivering a strong blow to women rights movements that attempt to remove the compulsion of the obligatory hijab and grant women equal autonomy, education and freedom. She is empowering suppression.

A true advocate of individual rights and democracy might instead have set a brave example. Women such as Mogherini are feeding into the system, not destroying it. Those who continue to give legitimacy to oppressors and Islamists need to be held accountable.

Finally, my message to people such as Mogherini and others like her is simple: Do you have any conscience or sense of decency? Or is it simply all about power, money, narcissism, and manipulations at the cost of the oppressed, including women? Can you hear that little girl’s cry, or are your ears as deaf to it as the men who cause it?