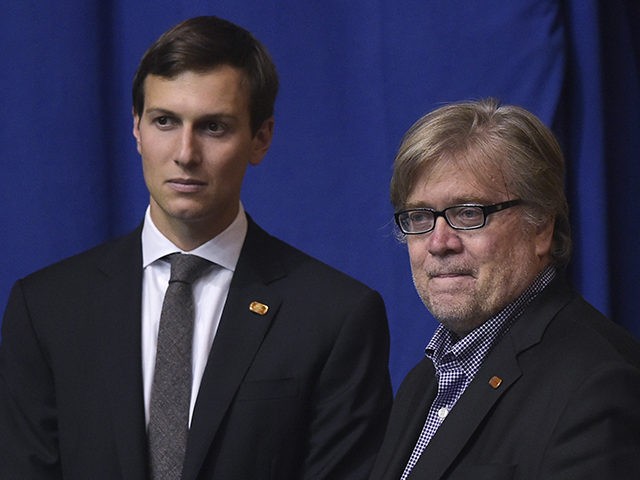 TEL AVIV – According to a report in Vanity Fair, while he served as White House chief strategist, Steve Bannon heavily lobbied President Trump to move the U.S. embassy from Tel Aviv to Israel’s capital, Jerusalem, but the move was blocked by Jared Kushner, President Trump’s son-in-law and senior adviser.

The magazine revealed that Bannon pushed a tougher stance against the PA, which pays salaries to terrorists imprisoned in the Jewish state for committing violent acts against Israelis and routinely incites against Israel.

Bannon, they say, lobbied Trump aggressively to move America’s embassy in Israel from Tel Aviv to Jerusalem, but was blocked by Kushner. And, according to three Bannon allies, Bannon pushed a tougher line against the Palestinians than Kushner did. In May, when Palestinian President Mahmoud Abbas visited the White House, Bannon stayed home. “I’m not going to breathe the same air as that terrorist,” Bannon texted a friend.

Abbas visited the White House and met with Trump last May.

Standing alongside Trump during his White House visit, Abbas attempted to whitewash decades of official PA incitement to violence and anti-Israel indoctrination that continue unabated to this day. “Mr. President, I affirm to you that we are raising our youth, our children, our grandchildren on a culture of peace,” Abbas claimed. “And we are endeavoring to bring about security, freedom and peace for our children to live like the other children in the world, along with the Israeli children in peace, freedom and security.”

Despite the PA’s repeated use of maps that erase Israel and PA propaganda calling for the dismantlement of the Jewish state, Abbas misleadingly claimed at the White House meeting that the “Palestinian people recognize the state of Israel.”

The official media and educational institutions of Abbas’s PA regularly incite against Israel. The Al Aqsa Martyrs Brigade, a terrorist group responsible for scores of suicide bombings and deadly shooting attacks, is closely aligned with Abbas’s Fatah Party and is routinely referred to as Fatah’s so-called military wing.

Abbas has refused to end payments to convicted terrorists, defending the stipends as a “social responsibility” even though the financing is said to encourage attacks against Israel.

During the 2016 presidential campaign, Trump had repeatedly pledged to move the U.S. embassy to Jerusalem. In July, Trump signed a waiver that delayed for six months a U.S. law requiring the embassy to be relocated from Tel Aviv to Jerusalem.

Bannon, meanwhile, submitted his resignation letter to the White House on August 7 and officially departed the administration last Friday. Within hours, he resumed his role as executive chairman of Breitbart News.

Bannon is known for his pro-Israel views. He was the driving force behind the founding of Breitbart Jerusalem and recruited this reporter to the news agency to defend Israel amid a constant barrage of biased news media reporting.