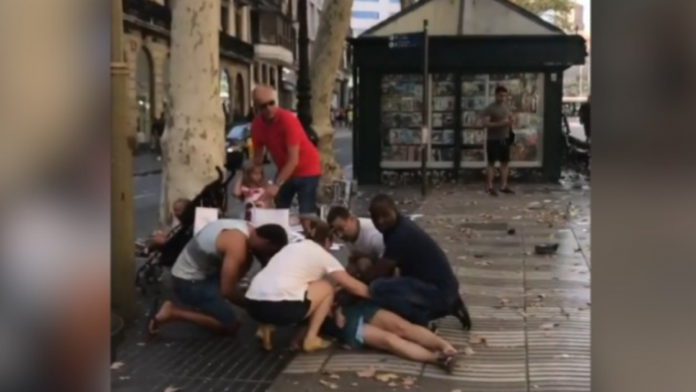 “Kill all infidels and only leave Muslims who follow the religion.”

The road to September 11 wended its way through this Spanish town where Mohammed Atta, the lead hijacker, met up with Ramzi bin al-Shibh, the former refugee to Germany and current Gitmo inmate, who had been serving as Osama bin Laden’s point man for the attacks that would kill thousands.

The hotel where Atta and Osama’s man met is a few blocks away from where the Muslim terrorists climbed out of their crashed car, drawing knives, axes and machetes, before a police officer working overtime to earn extra money shot most of them dead on the spot outside the Club Nautic.

The distance between where Atta was planning 9/11 and the latest terror attack in Spain is 110 meters. Stroll past a pub, a hair salon and a real estate agency in this seaside resort town and you’re there.

Cambrils hadn’t been the original target of the terrorists. Their dream target was the Sagrada Familia cathedral in Barcelona. When their bombs went off prematurely, they went to Cambrils and Las Ramblas in Barcelona because it was likely to have foreign tourists that they could run over, stab and mutilate.

The consistent pattern of the big Islamic terror attacks in recent years, from the Boston Marathon to the Pulse nightclub in Orlando, from Bataclan to the Manchester Arena, from the Champs-Élysées to London Bridge, is to look for nightlife spots or crowds of tourists all packed into the same place.

The Sagrada Familia, which at completion will be able to hold 14,000 people, would have been a target closer to the scale of September 11. When Pope Benedict arrived in ’10, 6,000 people were able to fill the cathedral. Around 10,000 visitors tour the building every day. Had the terrorists been able to move their original plot along, the way that Atta and Al-Shibh did theirs, thousands might have died.

The message of Driss Oukabir had been clear. “Kill all infidels and only leave Muslims who follow the religion”.

That’s always been the “sacred” mission of Islam. The bloody chapters of the plot played out in Cambrils, where the terrorists were gunned down as they tried to butcher pedestrians, Barcelona, where pedestrians were run over in a van, and Alcanar, where the terrorists squatted a house and filled it with gas canisters and TATP explosives before the whole thing was accidentally blown sky high.

But the Jihad didn’t come from these places. It came, as always, from an Islamic population center and its satellite mosque.

Like the river that adjoins it, the history of this small Catalan town of 11,000 flows back to the beginning of human history. Dig in the right places and you can find everything from bronze axe heads to Roman tombs. These days you can also find Muslim terrorists squatting in their mosques and plotting murder.

The small Spanish town has a Muslim population of 1,000. Or 9% of the population. That’s far above the national average. It also produced 8 of the 12 suspects in the Barcelona attacks.

Catalonia was once occupied by the Moors. It’s under Islamic occupation again. Half of the ISIS arrests in Spain have been made in Catalonia. In a few decades, Catalonia went from consisting of Catholics and atheists to a 7% Muslim population. That amounts to around 510,000 Muslim settlers in the region.

To put that into perspective, there are more Muslims in Catalonia than in some European countries. From their perspective, Catalonia is Al-Andalus. It’s an ancient Islamic territory that is rightfully theirs.

37.5% of Muslims jailed for terrorism came from Catalonia.

“I tell you, Spain is the land of our forefathers and, Allah willing, we are going to liberate it, with the might of Allah,” an ISIS terrorist had declared.

Muslim demographic migration and settlement has been conquering Catalonia. But the Islamic State has been less patient about swamping Spain through birth rates and asylum requests.

The Jihad in Ripoll came from its mosques which were centered around Imam Abdelbaki Es Satty.

Imam Abdelbaki Es Satty might be dead or alive. Some think he died when the explosives in that squatted house in Alcanar blew up. Others think he might have made it to Morocco where he had told acquaintances that he was bound. Or perhaps he once again made it under the radar to Brussels.

The Moroccan Imam had started out as a drug smuggler. He had reportedly served time with one of the ’04 Madrid train bombers. Links have also been drawn to the Brussels airport bombing last year. The mosques who hired him and whom he was associated with are denying any knowledge of his mission.

One mosque’s president claimed that terrorism was the act of “crazy people”. He insisted that, “Islam is peace.” The latest Islamic atrocities however contradict that tired nonsensical cliché.

Abdelbaki Es Satty was Moroccan. As were most of the terrorists. Four sets of brothers made up much of the Spanish terror cell. Beyond religion, the Jihadists were also a tightly knit clan. A family.

While the Moroccan Muslims were out for blood in Spain, a Moroccan Muslim went on a stabbing spree targeting women in Finland. It’s unknown if there was a connection, but as with Atta and Cambrils, the terror routes are transnational. Catalonia is a perfect Islamic terror hub because of its proximity to France. Satty veered between Morocco and Brussels while plotting terror in Spain.

While Europeans debate about the EU, Muslims already live in a world of open borders. They swarm in on boats from Libya to Italy, they travel from Turkey through Eastern Europe to reach Germany, they move between the emerging terror hubs of Spain, France, the United Kingdom, Belgium and Sweden. They cross over from America into Mexico and from Canada into America. And then back to Canada.

In Ripoll, Mayor Munell insists there’s no integration problem. “There is no problem of living together.”

There are never any problems. Just unexplained explosions. Screams and booms. The sound of bones breaking against a wall and the angry roar of a motor. And, above them all, the cry of, “Allahu Akbar.”

Meanwhile the same lies are told and retold.

The terrorists were irreligious. The Islamic community claims to know nothing about them. Or about Satty. The president of one of the mosques sneered, “I doubt if any of them could tell you the color of the carpet in the mosque.” If only they had come more often, they wouldn’t have turned to terror.

But the names of two of the terrorists are listed as donors to the mosque. And it’s the Imam who turned them on to terror.

Still it’s easier to ignore the terrible truth of Islamic terror. Even when it hits close to home.

In Cambrils, in Alcanar and Barcelona, the world briefly changed. The fifth Jihadist in the Cambrils car managed to stab a woman in the face before he was taken down. In Alcanar, body parts fell from the sky. Younes Abouyaaqoub, the last wanted member of the cell and the driver of the Barcelona van, shouted, “Allahu Akbar.”

And then the police shot him.

The dead will be buried. The surviving terrorists will be imprisoned. The families of the victims will grieve. And in the towns and cities of Catalonia, another Islamic cell will start building more bombs.