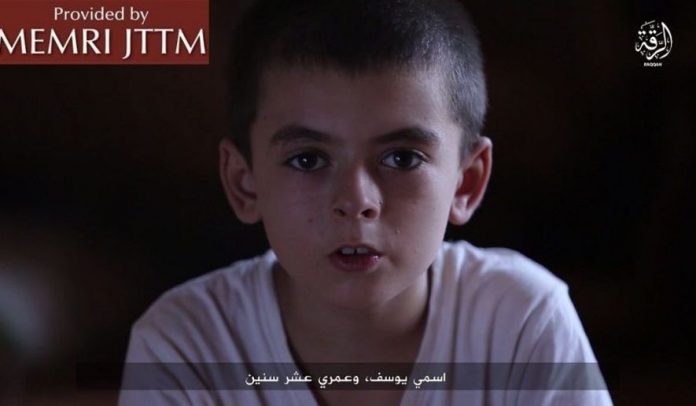 A new face of the Islamic State is a 10-year-old American boy the terror army claims came to Syria two years ago with his mother from the United States.

In a new ISIL propaganda video, the boy is identified as an American citizen named “Yusuf” and says he is the son of a U.S. service member who deployed to Iraq.

He looks straight at the camera lens to deliver an anti-Donald Trump diatribe, speaking in what sounds like Americanized English. He is shown living among the residences and destruction of Raqqa, the central Syrian city that ISIL claimed as the capital of its Muslim caliphate.

Scenes depict him with a male friend, Abdallah, 7, horsing around at home, walking among the rubble and learning how to fire a sniper rifle.

The video was obtained by the Middle East Media Research Institute (MEMRI), which monitors jihadis. MEMRI could not confirm the boy’s identify.