EXCUSE ME?!?!?  Rape victims in the UK need to be silent?  Or at least that’s what one MP leader there believes as she “likes” & retweets someone else’s post stating:

‘Those abused girls in Rotherham and elsewhere just need to shut their mouths. For the good of diversity.’”  [see story here ]

This UK leader received quite a firestorm and good that she did.  But, the question here is why did she support it and who is she?  Did she “like & retweet” it because she supports Shariah?  She believes Shariah is superior to any nation’s laws?  She believes Islam is superior to everything?  She would vote against Free Speech when it comes to Islam?  She believes women have no rights?  She believes FGM is good?  She is against Jews & Israel?  She believes in the caliphate?  These are all good questions that should be asked to know how she will work as an elected official.

Here’s a few more details and why we all should be concerned when looking at political candidates in the next election cycle.  The UK leader that posted this has since deleted her post due to the firestorm that followed it.  That leader’s name is:  Labour MP, Naz Shah 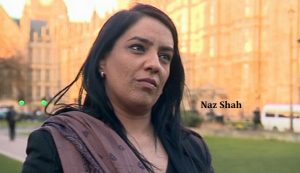 BE AN EDUCATED VOTER!

Then… determine if they merit your vote!